Agnipath literally means trail of fire. When Harivansh Rai Bachchan wrote his short poem with this name in 1973 little did he know that fifty years later this will really unleash a trail of fire and singe the country. The poem can be called an ode to the power of human determination or dedication undeterred by any adversity. The title of the poem inspired a film with the same name in 1990 which was all about a boy growing up to avenge his father's killing. There was a remake of the film in 2012. And now Agnipath is being peddled as the long-awaited magical transformation of India's armed forces.

For once it was not an announcement made by Narendra Modi, Defence minister Rajnath Singh got the rare opportunity to hog the limelight and announce the launch of the scheme on 14 June in the presence of the three service chiefs. In fact, the PM is yet to open his mouth on the scheme leaving it to his colleagues and party leaders and the Army top brass to defend the indefensible in the face of rapidly escalating countrywide protests. For the youth and Army aspirants of India, the scheme is as shocking as the sudden announcements of noteban and lockdown by Narendra Modi. But with years of experience with the entirely deceptive rhetoric of the Modi government and reeling under the burden of unprecedented levels of unemployment and price-rise, young India was quick to overcome the shock and explode in protests.

The scheme seeks to introduce a complete change in the recruitment process, all in the name of giving a youthful profile to the Army. According to the scheme, 46000 young men and women between the age of 17.5 and 21 (relaxed to 23 as a one-off concession) will be annually inducted into the Army, Navy and Air Force and after four years of service 75 percent of the recruits will be retired with an Agniveer certificate, a tax-free severance package of about 12 lakh rupees and promised priority in recruitment as security staff in certain services and industries. In one fell swoop the much talked about One Rank One Pension formula is negated to No Rank No Pension. For the government this reduction in the salary and pension bill for the armed forces is in fact the biggest economic rationale and for the Agniveers this is the biggest economic blow.

To put things in perspective, more than 80,000 were recruited in regular jobs in the armed forces with the One Rank One Pension formula in 2019-20. After two years of pause in recruitment on the plea of the pandemic, mentioned as a godsent opportunity by the Additional Secretary, Department of Military Affairs, the number of regular soldiers will come down to only about 11,500. The gradual reduction in the average age profile of the armed forces will be achieved through this wholesale contracualisation with its damaging implications for the institutional integrity and capability of the armed forces. Long term economic security (permanent job, stable income, guaranteed pension and medical benefits for the family) which is so crucial to a soldier's performance will disappear for the Agniveers, 75% of whom will be destined to face a very early retirement (at an early age of 21 to 25) and a long uncertain future.

We are now being told that the scheme was being contemplated since 1939. But we know that even in 2020 General Bipin Rawat, the Chief of Defence Staff who died tragically in a plane crash, leaving the CDS post vacant since then, sounded a very sceptical and cautionary note about the scheme. He openly wondered how it could be wise for the Army to invest all its resources to train and prepare a soldier only to lose him after four years. Perhaps the most familiar and loudest pro-Modi voice from among the retired military top brass, Major General GD Bakshi, has tweeted how he is flabbergasted by this new disruptive change. Hardly any retired Army official is enamoured of the Agnipath scheme and most are worried about its disturbing implications.

The larger worries stem from two points - firstly, about the implications of the scheme for the institutional structure of the Army, and secondly how the Agniveers will be reintegrated with the society after just four years of military training and service. In the wake of exclusive Agnipath-based recruitment, the Army will henceforth have two kinds of soldiers, regular soldiers with job security and short duration contractualised Agniveers who in turn will be permanently worried about retaining their jobs with the Army. Also, the federal or regional balance of the Army, currently ensured by the Recruitable Male Population factor assigned to each state, will come under a lot of stress with a centralised recruitment scheme like Agnipath.

The scale and nature of the problem of rehabilitation and reintegration of Agniveers after four years will perhaps be a bigger challenge. At present, soldiers retire after on an average twenty years of service in their late forties and early fifties. A section of them gets absorbed in the private security industry or in PSUs or government offices or as Special Auxiliary Police contingents. This group of ex-servicemen will now have competition with the Agniveers who will be retiring from the Army in their early twenties!

What are these young Agniveers expected to do? The government propaganda paints a rosy picture as young skilled and trained men equipped with a financial foundation of more than a million rupees who can apparently shape their future any way they like. But if we listen to the BJP leaders, we can perhaps get a clearer idea of the gameplan. Kailash Vijayvargiya, the loudmouth BJP leader from Madhya Pradesh, has offered to recruit them as security guards in BJP offices. Another BJP spokesperson and MP from Madhya Pradesh, Mahendra Singh Solanky says after saving the country for four years, the Agniveers will be saving their families from people of other religions! He says Agniveers should be happy that they are getting some salary and not having to work without remuneration like the conscripts in Israel!

We are aware of the infamous role of Mussolini's Blackshirts in fascist Italy and Hitler's Brownshirts, and subsequently the SS, in Nazi Germany. Is the RSS now looking at the Agniveers, trained by the Indian Army, as foot soldiers of a paramilitary organisation affiliated to the Sangh brigade, a more sophisticated and highly trained version of the Bajrang Dal? Instead of serving the Bharatiya Sena or the Indian Army, will they be expected to constitute a Bharatiya Janata Party Sena executing the RSS plan of turning secular democratic India as proclaimed by the Constitution into a fascist Hindu Rashtra as envisioned in the RSS ideology?

Young India has seen through Modi's absolutely fraudulent rhetoric of Achhe Din. From the promise of two crore jobs per year and tall talk of demographic dividend, the government has now come down to abolition of posts, downsizing of the permanent work force and retirement schemes in the name of recruitment! The Army aspirants have seen how this government has been playing with the educated youth in other fields of employment - railways and other government departments to schools and colleges. The anger ignited by the Agnipath scheme is therefore not going to remain limited to the catchment areas of military recruitment, it has every potential to resonate with other sections of India's unemployed and betrayed youth.

14 June 2022 may well have ignited the kind of fire that 5 June 1974 had done by triggering the historic Sampoorn Kranti or total revolution movement inspired by Jay Prakash Narain which had become the prelude to both the Emergency of 1975 and its end in 1977. The youth has another template from contemporary India - the historic farmers' movement that forced the Modi government to repeal the farm laws and is still fighting for other just demands of India's farmers. Since the days of the great 1857 rebellion, soldiers have essentially been farmers in uniform. Most of today's Army aspirants are also essentially farmers' children from rural India. Let the #RollBackAgnipath agitation learn from the tenacity and unity, resilience and determination of the farmers' movement and march forward with confidence. The government is trying to browbeat and blackmail the protesters, but with the support of the people the protesters can surely beat the government back and force it to retreat. 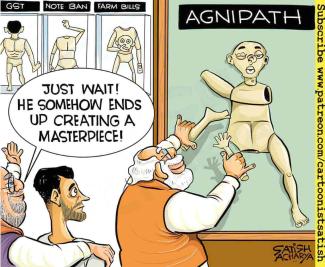