It is once again election season for the people of Himachal Pradesh, Delhi and Gujarat. Himachal Pradesh has already voted to form the next Assembly and government, Delhi will be voting on December 4 to elect its reconstituted Municipal Corporation and Gujarat goes to the polls in two phases on December 1 and 5. Desperate to defend its thoroughly discredited and non performing dispensations, the BJP is once again relying on another high-voltage Modi campaign and Modi, in turn, depends on his loyal 'godi media' to amplify his campaign of mass distraction. And the campaign is getting increasingly insulting for the electorate and ominous for the future of India's electoral system.

In Gujarat, the Morbi bridge collapse has clinically exposed the corrupt and callous nature of prolonged BJP rule in the state that the Sangh propaganda machinery has hyped up as the so-called 'Gujarat model of development and good governance'. The godi media has dutifully suppressed this massive scam, instead highlighting Modi's visit to the Morbi hospital which was again a shameful exercise in self-promotion. Earlier we were treated to another propaganda scam with the PM faking a visit to a pseudo school. And what now appears to be becoming another propaganda routine, in both Gujarat and Himachal we have been shown viral videos of Modi's convoy stopping to let ambulances pass.

This propaganda blitzkrieg aimed at projecting the dictator as a caring and compassionate leader is however not enough to satiate Modi's hunger for more publicity. He therefore keeps playing the victim card and inventing ever newer opportunities to promote and project himself. Around the sixth anniversary of the disastrous demonetisation when common Indians were recalling the enormous pain and loss they had to suffer and the huge economic price India had to pay for arguably India's biggest economic fraud and political stunt till date, Modi was telling us how his government prioritised delivery over publicity! Coming from a 'camerajeevi' narcissist who is accompanied by cameramen even while visiting his mother or visiting temples and who habitually pushes away anybody coming between him and his closest companion, the camera, could anything be more untrue ever?

On another occasion Modi told us how he had learned to endure and turn heavy daily doses of abuse into nutritious diets! This from a leader who has been notoriously intolerant of even the mildest of criticism, sending dissenting voices to jail, who infamously walked off in the middle of a television interview when asked a single inconvenient question about the Gujarat genocide perpetrated under his watch as Gujarat CM and who will go down in history as India's only prime minister who has never addressed a genuine press conference, granting only scripted interviews to certified godi media journalists! From periodically inventing conspiracies allegedly threatening his life to alleging 'humiliation' by the so-called 'establishment elite' and now this fairytale of daily abuses, Modi continues to play the victim card to perfection.

In Himachal, the BJP has been beset with massive internal dissension with more than thirty rebel candidates remaining in the fray despite all-out efforts by the Sangh-BJP high command to stop them. A video of Narendra Modi making a personal phone call to a rebel candidate has gone viral. Unable to control the rebellion, Modi openly told his audience that MLAs did not matter and people should actually vote for Modi by pressing the lotus button! The politics of absolute centralisation of power and unbridled personality cult could not be more explicit.

The godi media is of course leaving no stones unturned to distract the people's attention from the pressing issues of everyday existence by whipping up nationalist frenzy and sharpening communal polarisation. The T20 World Cup became an opportune occasion for the godi media to record a new low! Beginning with India's sensational last-ball victory over Pakistan in the first league match, the media went hyper to predict an India-Pakistan final and a glorious India victory in a dream final over the Pakistan team, termed 'Babar Sena' to heighten the jingoistic and communal quotient. Before the India-England semifinal, one channel paraded a panel of astrologers who all predicted an Indian victory after a tense battle. The match however turned out to be totally onesided with England defeating India by ten wickets!

Amidst this celebration of obscurantism, hate and lies, we can only hope that the aggrieved people of Himachal, Gujarat and Delhi will succeed in seeing through this game and make effective use of their votes to end the BJP's misrule. 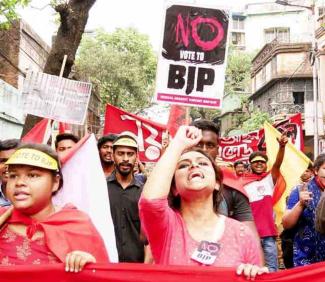