On the face of it, Tamil Nadu is one of the weakest states for the BJP from where the party has no representation in Lok Sabha and only four members in the State Assembly. Because of the deep roots of the Dravidian movement in Tamil Nadu and the powerful influence of progressive social values, it is often thought that the soil of Tamil Nadu is impenetrable for the BJP and its regressive social outlook and Hindi-dominated Hindutva ideology. But it will be a major mistake to ignore the BJP’s growing political presence and ideological influence in Tamil Nadu. Riding on the back of a faction-ridden AIADMK and various other anti-DMK parties in Tamil Nadu, the saffron camp is quietly but steadily gaining ground in the state.

Apart from trying various permutations and combinations at the level of political alliances, the Sangh’s current focus is on gaining legitimacy and changing the ideological environment of the Tamil society. To this end, they are trying to appropriate a whole range of Tamil icons including VOC (V.O. Chidambaranar, a Congress stalwart who developed differences with Gandhi) and the great writer and freedom fighter Subramania Bharathiyar. The Sangh however has a big problem with Periyar and his progressive legacy which popularised rationalism against religious obscurantism, and upheld social justice against Bhrahminism and women’s rights against the patriarchal prescriptions and regimentation of Manusmiriti. Tamil Nadu was the first state to reject caste surnames as part of a big mass movement when feudal values were otherwise very strong and stubborn.

Over the years the intensity of the movement for social justice and rationalism has been waning and the RSS wants to take full advantage of this situation to intervene with its counter narrative. It is trying to promote Ganesh Puja and other such festivals, capture and use temple committees to serve its agenda, and project ancient Tamil deity Murugan as the rallying emotive icon as Ram in North India. This ideological counter-narrative coupled with aggressive social engineering and political alliance-making seems to be the RSS formula for the growth of Hindutva politics in Tamil Nadu. The RSS wanted to take out marches across Tamil Nadu on Gandhi Jayanti, and after the state government denied permission citing intelligence reports about possible law and order disturbance, the High Court then directed the state to permit RSS rallies on 6 November. The administration permitted rallies in three locations in three districts where RSS presence is not so strong, denied rallies in 24 places and allowed indoor rallies in 23 locations. The court also stipulated harsher conditions including prohibition of carrying lathis, responsibility for any damage of public property, etc. Frustrated with the conditions, RSS has now gone to the Supreme Court for relief while holding rallies in three locations on 6 November which was not so impressive, according to RSS standards.

The opposition political climate is also somewhat favourable to the BJP today. The AIADMK is deeply immersed in internal squabbles between two former CMs, EPS and OPS. As a result, many AIADMK leaders are flocking to the BJP fold hoping for proper accommodation. With support from sections of the media, the BJP is trying to play the role of a visible opposition force in Tamil Nadu. The PMK too is sticking to the BJP-AIADMK camp hoping for a better future. Despite winning some MLAs in alliance with the DMK, the Congress is a divided house without any powerful state leadership. Against such a backdrop, the RSS-BJP is aiming at winning over the social base of the Congress in Tamil Nadu. The RSS attempt to hold rallies at 52 locations all over the state on the day of Gandhi Jayanthi, in the name of celebrating Gandhi, was also a ploy to make forays into the Congress’ upper caste, Brahmin and non-Brahmin, base.

In the course of its efforts for decades, the Sangh-BJP has gained influence among the elite section of one sub sect of Dalits, called “Mallars” (formerly Pallars) who are numerically significant in southern Tamil Nadu. In fact, they were successful in making some Dalit organisations reject reservation for the said caste citing their presumed princely past. In fact, the Modi government and the former AIADMK state government facilitated the process by granting legal recognition, while cleverly not removing from the list of Scheduled Castes, to some seven Dalit castes, clubbing them under the category of “Devendrakula Velalar”, identifying with the god Indra and claiming descent from Kshatriyas. The Sangh also has a significant foothold among the Tamil trading (merchant) community called “Nadars” in Kanyakumari district. With the help of AIADMK, the Sangh-BJP camp is also gaining influence among a dominant OBC caste called “Goundars”, the caste of former AIADMK CM Edappadi Palanisamy. The BJP selectively uses the tool of central MSME loans to cement its influence among emerging entrepreneurs in both rural and urban areas of western Tamil Nadu. Its systematic effort to gain influence among the scavenging caste in the region, Arundathiyars, has also paid some dividends while a lot is yet to be done by the party in western Tamil Nadu. Making L Murugan, the former BJP state president, a current Minister of State in the Modi cabinet is also aimed at winning over the same caste.

The Modi government is so using centralisation of power as a tool to weaken the federal framework and increase the BJP’s intervention and influence in Tamil Nadu. From assault on fiscal federalism through GST to the undermining of cultural and linguistic federalism through measures like NEET and the National Education Policy 2020, the BJP is relentlessly working on these lines. The deployment of central officials is also being heavily politicised to plant loyal pro-RSS officials in the state and recall upright officials on central assignments outside of the state. The Governor too is acting as an agent of the BJP government at the centre, withholding constitutional approvals while promoting Sanskrit and various regressive Hindutva ideas.

The DMK government is quite active on the agenda of defending federalism, but it keeps competing with the BJP in the sphere of corporate appeasement. There are also signs of Hindu appeasement as is the case now with many opposition parties. For example, it is busy evicting tenants in the name of removing encroachments on temple lands. The drive against encroachment is also directed against slums of the poor and the powerless while the rich and the powerful are allowed to escape in various ways. We also find saffronised police administration in districts like Coimbatore and Nagercoil where progressive people were detained for criticising Godse on the Gandhi memorial day. It is common knowledge that attacks against Dalits are also on the rise in recent period. The DMK state government that passed resolution against three farm laws is not willing to pass a similar resolution against Labour Codes in the assembly.

The DMK of course seeks to balance its pro-corporate model by mixing an element of welfarism. But it wants to use this welfarism as an insurance against its agenda of privatisation and other pro-corporate measures. The DMK propagates its economic approach of combining neoliberalism and welfarism as the Dravidian model in economics, linking it up with its political narrative that highlights self-respect, social justice, federalism and more power to the states. It remains committed to the policy of 69 percent reservation and is trying to counter the national Education Policy with its own education policy and defend linguistic and cultural diversity against the BJP’s attempt to impose Sanskrit and Hindi. In an overall sense, the DMK fares much better than most regional and other opposition parties in resisting the Modi government and its fascist offensive and aggressive Hindutva agenda.

Parties like the Viduthalai Chiruthaikal Katchi (VCK or Liberation Panthers Party) led by Tholkappiyan Thirumavalavan, CPI and CPI(M), which contested the Lok Sabha and Assembly elections as part of the DMK-led coalition, are not part of the State Government. There is a need to step up the independent role of the Left and progressive camp against the BJP’s fascist agenda and also to hold the DMK government accountable for fulfilling its election promises and responding to the needs and aspirations of the working people. CPI(ML) is expanding its organisation and initiatives on various fronts in this direction and seeks to enlist the cooperation of the VCK, CPI and CPI(M) as well as various Ambedkarite and Periyarist streams and other democratic forces and struggles. 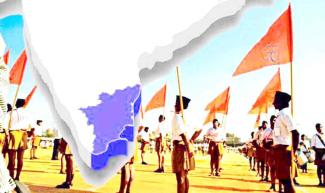