In the western districts of Tamil Nadu, which is industrially most-developed, one can witness the rampant, indiscriminate and crude forms of exploitation, including forced labour. Based on a complaint from Chhattisgarh Adivasi organisations and trade unions in mid-October 2022, a local-unit of AICCTU and RYA intervened and ensured the release of several workers who were natives of Chhattisgarh, who were being  held as bonded labourers in Namakkal district.

Comrades Subramani and Venkatesh of AICCTU, Kalidas of RYA met the district collector and filed a complaint against the migrant workers being held as bonded labourers, and sought for their immediate release and also for the protection of their life and livelihood, which included payment of wages and compensation. Based on the information provided by AICCTU-RYA, the government task force – comprising district collector, labour and child labour protection officers – initiated action to ensure the release of 37 migrant bonded labourers on October 19th, 2022.

The migrant labourers hailing from Chhattisgarh and Odisha were forced to work in the poultry farms of Namakkal district. They were brought to Tamil Nadu by two agents from Maharashtra and were handed over to local contractors Prakash Sahu (originally from Chhattisgarh) and Thangavel.

The workers were forced to stay in a dilapidated house without any basic amenities located at a poultry farm and were forced to work for almost 19 hours every day, without any break or interval. Sometimes, they were also forced to work for 48 hours. They were not paid any wages, but were only provided with some food for survival. The workers also suffered assault and violence at the hands of contractors, when they demanded better working conditions and wages. Their mobile phones and Aadhaar cards were also confiscated by the contractors. In this scenario, a few workers managed to escape their custody, returned to their native place and informed about the plight of the workers to local activists, including members of Adivasi Sangharsh Morcha (ASM). ASM and other activists later flagged the issue to AICCTU Tamil Nadu unit.

After their release, the Tamil Nadu government arranged for transportation to send these workers back to their native places and gave Bonded Labour Release Certificates, along with wages and compensation. The contractors, who attempted to escape, were arrested by the police and the process of recovering four months of due wages is underway. 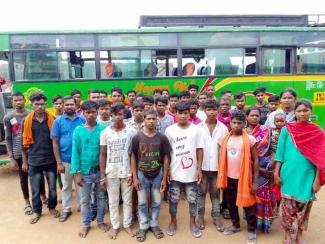