The All India Construction Workers Federation (AICWF) held its first ever all-India workshop at Ranchi on November 9th and 10th, 2022 in the backdrop of the Modi-led BJP government’s increasing attacks on the working class, including the introduction of Labour Codes, dismantling of welfare boards, etc.

Construction workers constitute a single largest contingent of workforce, next only to agriculture, in the country. But, they are the most neglected lot without any real legal protection. They work without any job security, wage security or social security. Longer working hours without any overtime payment, casual nature of employment, etc., affect them very badly. They often fall prey to occupational hazards and diseases, including lung/ respiratory related disease and cancer. In the absence of any safety precautions, the number of workers who have lost their lives while on duty is countless. The availability of data in this respect is rare and instances highly under-reported. A 2019 study by IIT Delhi says that around 48,000 people die at work in India every year, out of which, 70 per cent are construction workers. In such cases, unfortunately, neither the building owner, nor the builder or contractors are held responsible. Workers are forced to mend for themselves.

Some Major Changes in Laws

The paper on existing laws, Codes and implications for construction workers was presented by Comrade Balasubramanian. The Code on Social Security contemplates formation of a single welfare board at the state-level for all categories of unorganised workers by dismantling several welfare boards that exist now. Its welfare functions are restricted to the lowest. The provision of mandatorily providing basic amenities and rest rooms are completely relaxed and is now left to the discretion of the employers.

A construction worker was basically defined by their nature of employment. Now, the construction activities worth less than Rs. 50 lakhs are exempted from the definition of “Building and Construction Work” and thus workers employed in such projects are denied the application of relevant laws. In addition, a threshold of 10 and 20 numbers are introduced for application of labour laws. For example, workers are entitled to ESI only if more than 10 workers are employed and are entitled to PF only if more than 20 workers are employed. With these changed thresholds that provide legal protection to workers, a vast majority of construction workers will be removed from the purview of labour laws. Henceforth, as per the new labour code, only a worker engaged in a project that employs more than 10 workers in the previous 12 months will be considered to be a construction worker. This change in definition is a major blow to the workers.

Some Aspects of Construction Workers’ Unionisation

Comrade Shankar emphasised on the need to struggle for the expansion of welfare benefits; to organise against the nexus of real estate mafia, bureaucrats, builders and contractors; to hold the owners of the construction, builders and contractors responsible for any death or disablement while on duty and also for the welfare; and to organise struggles of construction workers against the policies of the central and state governments, for decent wages, better living and working conditions, proper housing and for the dignity of workers. He also pointed out a greater need to integrate the construction workers’ movement with the struggles of migrant workers and all other workers in urban areas.

He called for an intense and widespread campaign against saffron fascism and Modi government that is snatching away all rights of construction workers and to defeat the BJP in 2024 General Elections.

Inaugurating the workshop, Comrade Rajiv Dimri, the General Secretary of AICCTU, said that the Codes are being imposed upon the working class by the Modi government and this will soon do away with the ‘Building and Other Construction Workers (Regulation of Employment and Conditions of Service) Act 1996’. The repealing of this Act will lead to the closure of all BOCW Boards across 36 states in the country. In fact, the Code on Social Security is a direct blow on construction workers. He called upon union members to organise construction workers in large numbers and to resist Modi government and its anti-worker policies. 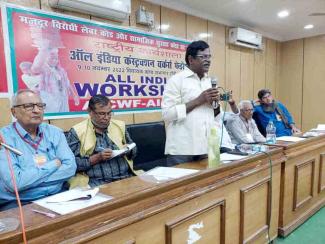