When the toiling poor begin to ask for their share from the people of the world, it won’t be a field, or a country, it will be the whole wide world. Quoting Faiz Ahmed Faiz’s well known tarana, Hum mehnatkash jagwaalon se, CPI-ML General Secretary, Dipankar Bhattacharya, at the inaugural session of AIARLA’s 7th National Conference exhorted the rural workers to claim the world. He encouraged AIARLA, in its role as a large organization of the rural poor, to take on big struggles, to realize all the rights of the rural poor.

The first day started with a march through the town. Fraternal organizations and other allies of the rural workers’ movement addressed the open session. Amiya Patra expressed solidarity on behalf of AIAWU and called for sharing ideas and taking up united struggles on issues of agricultural workers. Environmentalist Biswajeeet Mukherjee of Legal Aid Centre, highlighted the need for legislation for inter-state migrant workers. He said the dearth of data with labour departments, and the silence of State and Centre denies security and justice to workers. Swapan Ganguly of Pachimbanga Khetmojur Samiti, pointed to the crisis faced by NREGA workers in West Bengal who have not received their wages for one year, as Centre has washed its hands off by claiming corruption. He proposed joint struggles to get the wages of the workers. BKMU sent its solidarity message through Tapan Ganguly.

Comrade Dipankar further noted that whatever constitutional provisions exist, they are still waiting to be realized. It was only through intense battles that rural poor won their right to sit on a cot or the right to vote and which eventually led to election of their representative, Comrade Rameshwar Prasad, the Honorary President of AIARLA, as a member of parliament.  Comrade Shashi Yadav of AIPWA and Scheme Workers federation highlighted that there are about 1 crore Asha, Anganwadi, Mid-day meal and Mamta workers, of which most are rural women. She said, “They are at the front of implementing all government schemes yet they are neither considered as workers nor employees when it comes to giving them a wage and salary.” She said the women have to be mobilised as rural workers and also given leadership roles in the economic and political struggles. Solidarity was extended on behalf of AISA, RYA and AIKMS by Comrade Nilashish Basu, Comrade Neeraj and Comrade Shiv Sagar Sharma respectively.

The delegates at the organizational session deliberated on the impact of international issues posed by Ukraine war, promise indicated by rise of Left in Brazil against resource plundering rightist governments. Solidarity was expressed towards movements for democracy, freedom, gender equality and rights of minorities, tribal, dalits, women and trade unions, against corporate occupation, and struggles to save nature and earth.

Income inequality, growing hunger and indebtedness, loss of employment and health crisis during Covid period and lockdown emerged as common concerns from across the country. Inflation of basic items has reduced the consumption of the rural poor. Struggles of adivasis and dalits for their rights have been subjected to violent attacks ever since the rise of Modi government. MNREGA scheme for rural labourers is on the verge of dying today because of Central government surrendering its role in employment generation. Dalit rights violation have become rampant and violence on Dalit women and girls have increased and even registering cases of harassment have become big struggles. Organized attacks and crimes against tribals, and their eviction from forests and land, have also increased under the Modi government. The Bharat Bandh called on April 2, 2018, against the BJP government's conspiracy to weaken the SC/ST Act 1989 was historic and AIARLA fully participated in making it a success along with other organisations.

The biggest threat to adivasis are emerging from government’s pro-corporate policies. The FRA-2022 is meant to dilute the Forest Rights Act and the PESA Act-2013 which will make it difficult for traditional forest dwellers to settle their rights through gram sabha. The history of the tribal revolts is an inspiration for resistance and also a warning to the grabbers of their ancestral land and forests. The Conference concluded with a march invoking Birsa Munda’s historic revolution on 15th November and burning of the copies of the proposed act.  The work among tribal persons is focused in states like Jharkhand, Odisha, Gujarat, West Bengal and certain areas of Andhra Pradesh on questions of forest, land and water. In Bihar there is work among the tribal groups in Champaran, Jamui, Purnia, Katihar, Araria etc. In West Bengal, the education-cultural questions of tribal people have been regularly raised. There have been many popular movements against corporate encroachment on land and forests and wherever such movements are going on AIARLA has expressed militant solidarity towards them. The struggles against MNREGA had peaked after the previous conference. Successful agitations have been held at many places in Bihar and Bengal for organizing and getting work on demand, increasing wages and timely payments. In many districts of Bihar, separate committees were formed after holding conferences of MNREGA workers. The movement in the future, is likely to focus on dilution of the original scheme, increasing use of machines, harassment of workers through digitization and photography twice a day at the workplace, non-payment of minimum wages.

During Covid lockdown, AIARLA was the first organization to demand bringing laborers home safely at government expense. A 24-hour fast was organized across the country and demands made for lump sum assistance ten thousand rupees for all families of rural laborers, migrant workers and rural poor. Dismal situation of isolation centers was highlighted and facilitates demanded. A massive struggle on the Bihar border at Siwan led to migrant workers, stopped there, in being admitted to their state with respect, Buses were provided by the administration following the agitation and AIARLA played a big role in providing relief where none had reached across the country.

Movements against eviction of dalit settlements have gained in Bihar and against displacement targeting Muslims in Assam. A nationwide campaign demanding loan waiver, lowering of interest rate and punishing the micro finance companies for their harassment has gained ground in the Covid period. The indebtedness caused by the companies have led to large participation by women in these movements. Efforts of Punjab’s AIARLA units have led to organisational expansion in many districts and pressure was created on the government to issue a directive that stopped the extortion by the companies. Similar initiatives have been taken in Assam . Programmes have been held in Uttar Pradesh, Bihar, West Bengal and other states against indebtedness causes by micro finance companies. A number of women activists and leaders have emerged in this period.  Demands for electricity for dalit poor, reduction in tariff as well as withdrawal of arrears and cases filed against rural poor have seen participation in large numbers in UP and Bihar.

Dhirender Jha, the General Secretary of AIARLA said that by bringing to the forefront the social-political role of dalits and poor, pro-corporate development model will be challenged. By sharpening the housing rights of rural poor, AIARLA will counter the bulldozer Raj of the government. He said movements for expanding food security, will counter the growing hunger and malnutrition in the country. The declining social and community networks in the rural society has made the elderly vulnerable and universal pension is the need of the time. As National Educational Policy 2020 is likely to increase the disparities in education, AIARLA will take on the battle for equitable education. He said the MNREGA must make provisions for a decent living wage and Panchayat institutions will become a focus of these struggles. Atrocities against dalits and harassment of women will be given a resounding response by organizing people’s resistance.

The Conference committed to make AIARLA a popular organization of the rural poor.  A National Executive of 79 and  National Council of 205 members was constituted.  Rameshwar Prasad will be the patron, Sriram Chaudhary the Honorary President. Bihar MLA Satydev Ram has been elected the President and Dhirender Jha reelected as the General Secretary of the organization.

Resolutions passed at the Conference

1. We recognize B.R Ambedkar’s analysis of caste as a division of labourers and oppose the attempt of Modi government to promote casteism in society. The EWS reservation upheld by the Supreme Court affirms Modi government’s reservation of 10% quota for forward castes. This violates the principles of social justice that is behind the original provisioning of Reservation for constitutionally recognised groups like SC, ST and OBCs. The judgement is on the basis of excluding these groups from the 10% quota. Reservation is not a poverty alleviation method, for which employment and wages have to be improved, on which Modi government has completely failed.

2. AIARLA exhorts its members and public to rise against growing hunger and rural indebtedness. The deaths brought on by indebtness are signs of the government’s failure to control inflation and impoverishment of rural poor. The Global Hunger Index places India among worse off countries and the steady fall in the rankings establish that this government is playing with the lives of children of rural poor who are wasting, stunting and becoming increasingly malnourished. Child mortality caused by this negligence of the government anguishes the delegates and we are determined to mobilise against this enforced ill- health, malnourishment and deaths.

3. We are determined to mobilize against unchecked inflation and increasing unemployment levels that is forcing people to reduce basic consumption. The government instead of acting upon the price-rise and unemployment is further promoting inequality by bringing policies to enrich its corporate allies.

4. The scams in teacher appointment in Bengal has got exposed and the education minister Partha Chatterjee of TMC has also got jailed. However, the main issue of teacher appointments has been put in cold storage. We demand that education of the rural poor should not be scuttled and teachers and staff be appointed in a transparent manner at the earliest.

5. AIARLA condemns the dilution and distortion of MNREGA by the Modi government and various state governments by reducing budgetary provisions, non- provisions of wages in time and not offering work to those seeking it in this time of rising prices and unemployment. We recognize this as an act against the Right to life and livelihood of the rural poor and will mobilize for immediate payment of wages at the completion of each day’s work, 200 days of work and Rs. 700 daily wages. The government cannot enrich its allies while denying the rural poor even survival rights.

6. We exhort the people to rise in unity against the trampling of life, livelihood, dignity, wages, education, employment of dalits and adivasis. We will organize and agitate against Modi government's attempt to establish Manuwad. We will resist violation of dalit women and atrocities against Dalits and Adivasis.

7. We recognize more than one crore women engaged in implementing scheme of the government as employees and workers of the government, who are being denied minimum wages. Most of these women are rural workers and we will mobilise them to achieve their economic rights.

8. We the delegates of AIARLA endorse the Sanyukt Kisan Morcha’s call to demonstrate before governor houses and ensure guarantee of MSP of grains and all agro products. We recognize that the government policies to corporatise farming is to further snatch away the bargaining power of agricultural labour/work which has been attained after many struggles.

9. We are anguished at the death of innocent migrant workers in Kashmir. This is an        outcome of the complete failure of Modi Shah’s policy which has taken over the state and made into union territories abrogated article 370 and created a vicious atmosphere of distrust among local population. The lives of migrant worker are not fodder to play politics by the central government. We demand that migrant workers’ dignity, safety and social security be ensured through a central legislation. 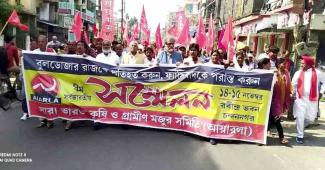