The derogatory remarks made by then BJP national spokesperson Nupur Sharma against Prophet Muhammad seem not just to have triggered a global storm of protests but also what increasingly looks like a murky multi-layered plot in India. The refusal of the Modi government to act against Nupur Sharma in accordance with the law of the land and the attempt to dismiss her remarks as stray comments made by a ‘fringe element’ predictably generated considerable public anger and in many places across India, Muslims protested in large numbers. The Indian state resorted to bullets and bulldozers to crush these protests – while bulldozers were pressed into service in BJP-ruled Uttar Pradesh, opposition-ruled Jharkhand witnessed deaths and injuries in police firing.

These incidents all happened in the immediate aftermath of the Nupur Sharma controversy. With the announcement of the disastrous Agnipath scheme on 14 June, the declaration of the schedule for Presidential elections and the dramatic toppling game in Maharashtra, the spotlight was expected to have shifted away from the Nupur Sharma episode. But the witch-hunt against Mohammed Zubair, the shocking killing of Kanhaiya Lal in Udaipur and the startling revelations about the Udaipur killer’s association with the BJP clearly tell us that there is much more to this controversy than meets the eye.

The Udaipur killing and its videography and circulation clearly have the potential to provoke a massive backlash. The killing was condemned by one and all and the country has been relieved to see that Rajasthan 2022 did not replicate the traumatic template of Gujarat 2002. It did not take long in this digital era of social media to identify the Udaipur killer and his political association. Mohammad Riyaz Attari, who, along with his accomplice Mohammad Ghaus, has confessed to committing the murder of tailor Kanhaiya Lal is seen prominently photographed with the BJP leader of opposition in Rajasthan Assembly Gulab Chand Kataria and BJP’s Udaipur President Raveendra Shreemali. His close association with two prominent Muslim leaders of the BJP, Mohammad Tahir and Irshad Chainwala, is also an indisputable fact.

Had Riyaz Attari been found to have such association with any of India’s opposition parties, the dominant media would have gone berserk and the RSS-BJP establishment would have been screaming about the opposition giving political patronage to terrorism. But Riyaz Attari’s confirmed association with the BJP is being sought to be buried in silence. Another incident of killing, of a chemist in Maharashtra’s Amaravati, purportedly for supporting Nupur Sharma’s remarks, has understandably raised concerns about the nature of these killings. Meanwhile, there is this news from Kashmir about Talib Hussain Shah, who was appointed an in-charge of BJP’s minority social media wing in May and arrested on 3 July by Jammu and Kashmir Police as a ‘wanted terrorist’ and ‘Lashkar-e-Toiba commander’.

The task of Investigation into the Udaipur and Amaravati killings has been handed over to the NIA. About the Kashmir incident of BJP appointing a ‘Lashkar-e-Toiba’ commander as a social media in-charge the blame is being laid on the online recruitment system and lack of background check. A BJP spokesperson has already termed it a ‘plot to kill the top leadership’. The same script was used in Gujarat to justify the string of encounter killings during Modi’s chief ministership and has been invoked more recently with the help of Israeli spyware technology and planted electronic evidence to arrest human rights campaigners in the Bhima Koregaon case. It will not be surprising if the Nupur Sharma controversy and the Udaipur and Kashmir revelations are used now to invoke the script of ‘threat to BJP top leadership’ and launch yet another witch-hunt ahead of the 2024 elections.

The arrest of Mohammed Zubair and the orchestrated clamour in social media for the arrest of Pratik Sinha, both co-founders of the pioneering fact-checking site Alt News, already smack of a sinister witch-hunt against the alternative media and the campaign against fake news. Just as Teesta Setalvad, RB Sreekumar and Sanjiv Bhatt are being persecuted for pursuing the campaign for justice for the victims of Gujarat genocide, Mohammed Zubair is being hounded for his bold role in the battle against fake news and mischievous lies. For a regime propped up by the four pillars of hate, lies, repression and terror, truth and justice are bound to be an anathema and citizens pursuing these goals are treated as dreaded criminals.

Backed by the unbridled corporate power of the Adanis and Ambanis and armed with the central agencies like ED and CBI, the BJP is now drawing up a plan to rule India for another forty years, as claimed once again by Amit Shah. Agnipath has already given us a glimpse of the government’s plans to politicise and reconstruct the Indian Army where contract soldiers without job and social security will fight on the ground while the top brass will defend the government of the day. The police announcement of rejection of Zubair’s bail petition hours before the issuance of the actual judicial order and the Supreme Court instigation to arrest Teesta Setalvad for seeking justice for the victims of the Gujarat genocide are a preview of the future of India’s judiciary.

In the eight years Modi has been in power at the Centre, the BJP has moved from ‘Congress mukt Bharat’ to dissent-free democracy. It is time for India to return to the Preamble of the Constitution and proclaim it loud and clear that modern India is all about democracy, diversity and dissent. In the eightieth year of the historic Quit India movement, India must say an emphatic no to the disciples of the colonial rulers who are trying to reduce India to a bulldozer-driven banana republic! 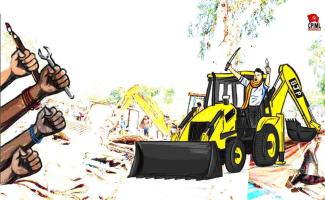