India’s anti-colonial struggle or, freedom movement, is a prolonged and diverse chapter in the history of India. It is a rich tapestry woven by myriad struggles that deepened and enriched the quest for a modern India. Immediate issues and contexts varied in different periods and different regions – struggles against landlordism and usury, against local kings, against caste and gender oppression and injustice, and for linguistic rights and cultural diversity, all added to the momentum and canvas of the freedom movement. Multiple modes of mobilisation and methods of struggle guided by a broad spectrum of ideologies from Gandhian and Ambedkarite to communist and socialist of various shades – all should be recognised as diverse strands of the grand narrative of India’s freedom movement. Ironically, the one stream which was conspicuously absent in the freedom movement and busy with its own project of defining Indian nationalism on the basis of Hindu supremacy now rules India as India observes the seventy-fifth anniversary of independence.

The rise and domination of British colonial power over India itself had a history of more than three centuries – first in the form of the expanding commercial operation and network of the East India Company from the early seventeenth century to the Battle of Palashi (1757), followed by the rule of the Company for a period of hundred years (1757-1858) and the final leg of direct rule of the British Crown from 1858 to 1947. From cruel loot and plunder to an institutional reign of repression and manipulation, this trajectory of colonial rule evoked continuous resistance and periodic revolts since the first recorded Adivasi revolt led by Tilka Manjhi in 1784. This entire history of resistance should be recognised as the history of India’s freedom movement.

The battle of Palashi in 1757 and the battle of Buxar in 1764 led to a major consolidation of the Company rule in north India and the rulers sought to reinforce it by creating a class of loyal landlords through what came to be known as the Permanent Settlement or the Cornwallis Code. But this coercive colonialism and landlordism, and the allied element of cruel usury, was deeply resented by the overwhelming majority of rural population, the peasants and Adivasis in particular. Revolts kept breaking out and reached a new high with the Sathal Hool of 1855 and the great rebellion of 1857, following which the British crown not only established its direct rule but also brought about considerable change in its strategy.

The rebellion of 1857 had highlighted two major threats to the British rulers. Contrary to the British expectations of a Hindu-Muslim divide and a fragmented Indian polity, 1857 showcased the great potential of a national awakening where Hindu and Muslim soldiers, farmers, traders and even aristocracies joined hands against the foreign rulers. Post 1857, the British rulers therefore adopted ‘divide and rule’ as their declared blueprint and cultivated the princely states as their trusted allies. The freedom movement of course tried to evolve a policy of ‘unite and resist’ to counter the ‘divide and rule’ strategy, but could not stop the eventual denouement of a traumatic Partition accompanied by a massive bloodbath, forced migration, destruction and loss. The ‘divide and rule’ strategy culminated in ‘partition and quit’.

The RSS which now rules India through the BJP and is desperately trying to impose its own ideology and outlook as the ruling ideology seeks to reduce the history of India’s freedom movement to the trauma of Partition even as the Modi regime is busy appropriating a whole range of leaders of the freedom movement while distorting and denigrating a few others. This is a clever ploy to cover up the sordid reality of the actual role played by the RSS and other Hindutva protagonists during the freedom movement. The Hindutva lobby stood away from the freedom movement, its biggest icon Savarkar is now best remembered for his half a dozen mercy petitions to the British rulers, while the RSS was in awe of Mussolini and Hitler. Golwalkar wrote about how India should profit by emulating Hitler’s Nazi Germany model based on ‘race purity and pride’ while Savarkar posited the model of a Hindu India where Hindus, defined broadly as people who are born in India and who also follow a religion born in India, will wield all political and military power.

The RSS answer to India’s partition is the reconstruction of an Akhand Bharat which will include not just India, Pakistan and Bangladesh, the three countries that have been formed in the wake of 1947, but also Afghanistan in the North-West, Myanmar in the North-East, Sri Lanka in the South and Nepal, Bhutan and Tibet in the North. This is not to be confused with a desire for reunification (like the reunification of Germany or the desire for reunification of Korea), it is clearly an expansionist imperial dream (like Putin’s talk of a Greater Russia that will be at the heart of a Eurasian empire). The Akhand Bharat advocated by the RSS had no historical existence, it is the projection of an imaginary past of mythical glory that is being peddled as a toxic dream to divert the attention of the people from the problems and miseries of the present.

India and Pakistan have been existing as separate countries for seventy-five years, Bangladesh has been in existence for more than fifty years. Keeping in view the shared past and common interests of India, Pakistan and Bangladesh, the three countries can of course contemplate a confederation and a more vibrant and energetic framework of cooperation in South Asia than the currently dormant and nearly defunct SAARC, but the RSS vision of an Akhand Bharat can only be a prescription for a state of permanent conflict in South Asia and greater alienation of India from all its neighbours. Forget about restoring the old undivided India, any attempt to define Indian nationalism on the basis of a homogenised and regimented political Hinduism will only jeopardise India’s current national unity. Even though the constitution fell short in terms of securing the extent of rights, depth of democracy and consistency of liberty, equality, fraternity and comprehensive justice it promised, the preamble proclaimed the basic spirit of a modern democratic republic.

In the wake of the First World War and the victorious Russian Revolution and more organically during the Second World War and its aftermath, India’s freedom movement had become part of the international anti-colonial anti-fascist awakening. The exit of British colonialism from India in 1947 and the rise of new China in 1949 dramatically changed the global political landscape in the second half of the twentieth century. Modern India’s journey as a democratic republic had begun against this changed international backdrop.

Today, seventy-five years after that historic ‘tryst with destiny’ the Indian journey is headed in a totally different and retrograde direction. It is now quite clear that the ascendance of Narendra Modi to power in 2014 and his renewed victory in 2019 have emboldened the Sangh-BJP establishment to rewrite the fundamentals of India’s statecraft where the executive now brazenly dominates the legislature and the judiciary and the tenets of the Constitution are being openly flouted. The separation of the state and citizenship from religion is being discarded and with a new parliament building democracy is being pushed into a new era of regimentation where basic expressions of criticism and opposition are being declared ‘unparliamentary’. If the Emergency was India’s previous recorded experience with suppression and suspension of democracy, we now find ourselves in a state of permanent emergency. The old Emergency only had a repressive state, its new avatar comes with a cheerleading media and killer squads revelling in street violence.

For the Modi regime, the seventy-fifth anniversary of India’s independence is an opportunity to distort and rewrite history in the service of its own agenda. We the people of India must revisit the history of the freedom movement to reignite the dreams of liberty and equality so we can rebuff the growing fascist offensive. 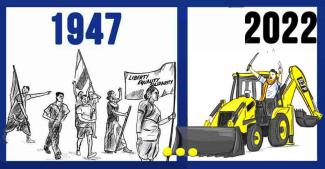