The recent protests in Iran highlight once again how global warming and capitalism induced climate change can increasingly result in an increasingly volatile global political order. Droughts have resulted in exacerbation of political conflicts in places as far flung as the western United States, Syria, and Central Asia among other places in recent times .

Southern Iran is currently experiencing one of the worst droughts it has faced in nearly 50 years, affecting 700 villages and nearly 28 million people, i.e. one third of the entire population of Iran. This comes at a time when the Iranian economy has been severely crippled by the sanctions placed on it by the Trump regime, which the Biden administration has failed to revoke so far, resulting in a 60% drop in GDP from 2017. The corruption of the Iranian administration and the mismanagement of the COVID19 pandemic has meant that public trust in the government is rather low.

The province of Khuzestan, largely inhabited by an Arab ethnic minority in Iran, has been the hardest hit by the drought. However, water from the Karun River has been diverted towards the neighboring Isfahan province provoking allegations of ethnic bias. Kaveh Madani has pointed out that the Iranian government’s “symptom-based management paradigm”, which emphasizes on treating the symptoms of the water crisis, are also to blame for the problem . Protests spread from locally contained ones with specific demands to much wider protests with demands for systemic change. The heavy handed response from the Iranian government has resulted in multiple deaths.

Central Asia on the Verge of a Water War

Another region that has been prone to climate conflict has been Central Asia with a number of states emerging out of the break-up of the USSR in 1991. The Aral Sea, the fourth largest lake in the world, has largely dried up due to industrial and agricultural overexploitation. The Fergana Valley, drained by the Amu Darya and Syr Darya rivers, is one of the most prosperous areas of the region and has been the focus of nearly 70 border conflicts between Uzbekistan, Kyrgyzstan and Tajikistan from 2011 to 2015.

The key problem as identified by researchers at PeaceLab is the conflicting needs of the upstream and downstream countries . The upstream countries like Kyrgyzstan and Tajikistan use water for electricity generation through hydropower plants. This leads to lack of reliable availability of water for irrigation in the downstream countries. The problem was alleviated during the Soviet times by compensating the upstream socialist republics with alternative sources of energy including coal and natural gas so that the reservoirs could be operated in favor of their downstream neighbors.

Clashes however broke out again in the Fergana valley between Kyrgyz and Tajik security forces in April leading to the death of over 50 civilians and military personnel from both sides. A UNDP-OSCE joint study of the situation linked climate change with the possibility of violent conflict in the region .

Central Asia is not the only region in the world that is facing security threat from climate change and water crisis related to such change. The United Nations Secretary General António Guterres has pointed out that “Climate disruption is a crisis amplifier and multiplier”. The civil war in Syria was preceded by a severe drought between 2005 and 2011 that caused 75% farms to fail and created an economic crisis. Extreme droughts and flooding in Iraq can also be linked to the growth of ISIS. Much like in Central Asia, the construction of a dam on the Blue Nile by Ethiopia has resulted in increasing conflict between it and downstream Egypt, leading to an increasing defense expenditure in Egypt and the threat of war.

Balancing climate change and its economic fallout is becoming a global challenge as large sectors of global capitalism are linked to unsustainable amounts of consumption and an anarchic form of production. Transitioning to a ‘green’ economy has not proven to be easy either as we see in the Appalachian areas of the United States where a decline in mining has devastated communities and emboldened support for ‘White Nationalists’, who have promised to bring mining back and undo anti-climate change measures.

Climate change seems to have a multiplier effect on imperialism. While the wealthiest sections of the Global North often have the highest per-capita carbon emissions, the disproportionate effects of it are felt by the poorest, especially in the Global South. On the other hand such unequal distribution of essential resources have emboldened the rise of right wing forces all over the world , primarily with the aim of controlling those limited resources.

The current conditions require left and progressive forces globally to come together towards building a future for the people as the link between climate change and capitalist overproduction become increasingly clear. 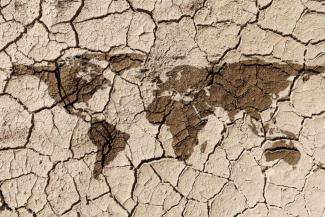