At the Afghan Solidarity demonstration organised in Delhi on August 23 (demonstrations were observed at Bangalore, Kolkata, Budge-Budge and Bishnupur in South 24 Parganas, Udaipur and Jaipur), several Afghan women students joined in. Holding a large Afghan flag and placards that said “Burqa is a cage” and “No to Taliban Rule”, these women were eager to speak about their experiences. One young woman student recited a poem she had written in Farsi. Another young woman Sadaf addressed the Indian activists’ gathering to say “Nobody chooses to be a refugee. We are being betrayed and we must do what we can to spread awareness and help them.” One student Rukhsar Rahim spoke in Hindi and English, making a great impact on her audience with her clarity and courage. She said, “When the Taliban came to power in the 1990s, my mother had to give up her studies. Women have worked so hard in the past 20 years, and now all their work stands to be destroyed. In India we are asked why are you not welcoming Taliban, you should be happy that Islam is victorious. What Taliban says is not Islam. We respect the hijab but where does Islam say women have to cover up from top to toe in burqa and be lashed if your ankle is visible? What kind of “Islam” is this? I challenge anyone to go over the Quran page by page and show me where it mandates this kind of bullying of women. Afghanistan already was an Islamic state, we have a Constitution, we do not need terrorists and thugs in power in the name of Islam. We want an elected Government willing to respect human rights and women’s rights. If Taliban is willing to do that then we will welcome then - but if not we do not accept Taliban rule. Taliban could capture power but they cannot capture people’s support that easily. They will find that Afghan people are willing to fight. If there’s democracy in Afghanistan we will waste no time in returning to work for our people, teach girls, help women. We will never stop fighting even if we die, we’ll fight as long as we live.” 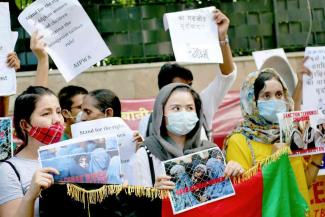