Survey of ASHA Workers in Delhi

The Covid 19 pandemic has brought the importance of the ASHA workers in running and sustaining the public health care system to the forefront. Since the pandemic broke out ASHA workers have been working as frontline workers against the coronavirus outbreak performing important tasks like disease surveillance, reaching out to infected patients with medicine, conducting daily temperature checks in neighbourhoods and encouraging people to get vaccinated against the virus. But little is known about the fact that most of the work done by ASHAs goes unnoticed and is grossly underpaid. To begin with ASHA workers were meant to carry out tasks around healthcare for children and pregnant and young mothers. But during the course of the pandemic, they have been made to most of the grunt work in the public health system with little or no pay and zero recognition of the risks they have taken and putting their own lives in danger while carrying out their responsibilities. An overwhelming number of ASHA workers across the country didn’t even get basic equipment like masks, face shields, gloves and sanitizers during the covid pandemic. On top of being perennially underpaid, receiving just Rs. 3000 as honorarium for their regular work, they received a pittance of Rs. 1000 as bonus for the extra work they performed during the pandemic. Despite this they have received scant recognition for the crucial role they performed as frontline workers.

To highlight the apathy with which they are regarded the Delhi ASHA Kamgaar Union affiliated to AICCTU conducted a sample survey of over 200 ASHA workers across 10 dispensaries in Delhi. The findings of the survey paint a stark picture of the underpaid and exploitative working conditions that ASHA workers have to face day in and day out. It also shows that little respect that is paid to the labour of ASHA workers who work in undignified work conditions.

The important findings of the survey are as follows:

From the above findings a clear picture emerges of the underpaid and exploitative nature of the work that ASHA workers do. Trade unions of ASHA workers and trade unions in general have been saying it for years that ASHA workers are one of the most underpaid and overexploited members of the working class. Despite the invaluable service they have provided during the course of the pandemic only lip service has been paid to them without guaranteeing their rights and dignity. The findings presented here are preliminary findings from the survey conducted by the Delhi ASHA Kamgaar Union, a detailed report will be released very soon. 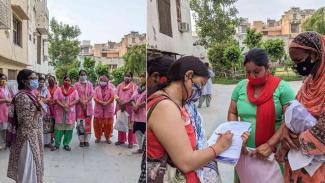