A 19 year old girl comes to a town with hopes of a better life.  She joins as a receptionist in a resort and days later she is first reported missing and soon after her body is recovered from a canal. As her dreams and life are brutally cut short by perpetrators close to power, justice and administrative mechanism in BJP ruled Uttarakhand  engage in massive cover ups to drown the real questions.

On 17 September, Ankita Bhandari, who had come from a village in Pauri district in Uttarakhand to work in a resort called Vanantara in Rishikesh, was found missing. It had been less than a month that she started working in this resort owned by Pulkit Arya, son of BJP leader Vinod Arya (former minister in the BJP led government in Uttarakhand). Pulkit himself has been associated with RSS student wing, the Akhil Bhartiya Vidyarthi Parishad and had been the coordinator of its’ Technical Education Cell. After Ankita went missing, her father went to three police stations seeking help to find his daughter. He was told that since the area falls under revenue police jurisdiction he needed to approach the Patwari. When Ankita’s father went to meet the local Patwari Vaibhav Pratap, he was first refused entry and was later told the complaint could be filed only after 24 hours of missing. On much insistence, he took Ankita’s identification details.  But instead of following up the case, he went on a leave  approved by the Tehsildhar. After six days of Ankita’s disappearance, on 23 September, the matter was transferred from the revenue police to the civil police. On 24 September Pulkit Arya along with two other accused was arrested and he confessed having thrown Ankita into Chilla canal from where her body was recovered.

While the common people of the state were out in protests demanding justice for Ankita and a thorough investigation into the happenings in the resort, there have been serious attempts to drown these concerns through careful diversion mechanisms. The initial investigations clearly revealed that the resort was forcing the female staff into providing sexual services to some guests and as Ankita’s murder shows,  refusing to accept ‘No’ for an answer. Since the resort was owned by a person closely associated with the ruling party BJP, it is all the more important to inquire who were these VIP guests who were being ‘serviced’ through exploitation of women. There were clear indications that the rot ran deeper and hence there was an  urgent need to take over the premises to extract all possible evidences present. What we witnessed  instead, is a deliberate attempt to destroy all evidences by the administration. The administration, taking clue from bulldozer politics of BJP governance, bulldozed the resort. This was a clear attempt to destroy crucial evidences that could expose the vicious network of a system that resulted in the murder of a girl like Ankita. Reports suggest that the resort in question had been built under the pretext of starting a factory for Ayurvedic medicines.  Considering that now the SIT probing the matter claims that the resort was being run illegally, the question of destruction of serious evidences become all the more important.

Today as we stand in demand of justice and truth, it is important to remind ourselves what questions do we need to raise and what should justice mean. As questions are being asked around the trio of Vinod Arya and his sons Pulkit Arya (the main accused) and Ankit Arya, mere expulsion from the party or the arrest of Pulkit does not absolve the party in power of its complicity in what happened. The ruling party in the state should tell us:

1. Why was the police denying to inquire into Ankita’s disappearance initially? Whom is the  administration protecting by destroying site of crucial evidence in the murder of a young girl?

2. In a state that is being ruled by the BJP twice in succession now, how is it that a resort run by the family of its former minister was not registered with the state tourism department and lacked even a fire NOC (No objection certificate)? Can such blatant violations occur without complicity of higher ups in the government? Does a party that rules based on CBI and ED raids, nurture such corruptions in its own states?

3. There is a conscious attempts by sections in the administration to divert the debate to jurisdiction of revenue police vs regular police, thereby giving easy route to the ruling regime to escape accountability on such a heinous crime.  While the Patwari who refused to register complaint has been rightfully arrested, he could not merely have been acting on his own, given that his leave was hastily approved and the case involves the bigwigs of the state. Also, when right from establishing the resort to running it, laws have been violated at every step, does it not become evident that those close to the power in the state enjoy impunity irrespective of the governance structures?

The case once again and for the umpteenth time brings out the largely gender unsafe, exploitative and hostile environments at workplace, especially in the private sector. There is no protection to female workers when they try to resist sexual exploitation by saying No to powerful people  close to the employer.  From Kathua in erstwhile J&K, Unnao and Hathras in UP to Pauri in Uttarakhand- the pattern is clear. When women speak out against sexual exploitation by powerful people and when  families seek justice for the daughters who were assaulted and murdered, they are dealt with most brutal form of violence and incarceration in BJP ruled states. It is important that as citizens we remain alert to these questions and not be led astray by accepting mere expulsions of criminals from the party and destruction of evidence by administration as justice. 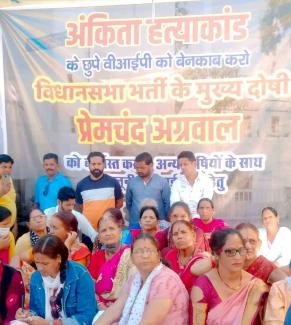