The Hindustan Socialist Republican Association (HRA in an earlier avatar) and its youth organisation the Naujawan Bharat Sabha (NBS) are uniquely inspiring elements in India’s freedom movement. Its activists traveled in a very short time from a focus on revolutionary violence to a comprehensive socialist vision of freedom, achieved through the organised assertion of India’s workers and peasants. Today, the HSRA’s legacy is especially relevant – of courage; of robust resistance to communal hate and violence and the graded inequality of caste; of the supreme sacrifice of their lives – and of a clear vision of a Marxist, socialist party that would achieve a socialist India.

Ram Prasad Bismil led a group of young activists to form the Hindustan Republican Army in the wake of Gandhi’s move to call off the Civil Disobedience movement after Chauri Chaura. Other prominent founders included Anushilan Samiti leaders Sachindra Nath Sanyal and Jogesh Chandra Chatterjee. The HRA Manifesto written by Sanyal called for the overthrow of British colonial rule and its replacement with a "Federal Republic of the United States of India” which would have universal suffrage and the socialist-oriented aim of the abolition of "all systems which make any kind of exploitation of man by man possible".

Ashfaqullah Khan, Ram Prasad Bismil, Roshan Singh and Rajendra Lahiri were convicted in the Kakori conspiracy case and hanged in December 1927, while 16 other comrades served long prison sentences. Bismil and Ashfaq devoted their last messages to fellow countrymen and women, to fervent appeals to reject the communal politics that pitted Hindus against Muslims.

“If a devout Muslim like Ashfaq could be right hand man of an Arya Samajist like Ram Prasad in revolutionary movement, then why can’t other Hindus and Muslims unite forgetting their petty interests? Now my only request to countrymen is that if they have even an iota of sorrow at our death, then, with whatever means, they must establish Hindu-Muslim unity; that was our last wish and this only can be our memorial.”

Ashfaq’s final message asserted that for him freedom must be nothing less than socialism:

“I consider the alien rule an evil and at the same time, I hate any democratic Indian rule where the weak are denied their rights, or if it is the creation of the rich and landlords, or there is no equal participation of the farmers and workers, or if the laws of the Government are made on the basis of inequality and disparity. If India becomes free and our brother countrymen take the reins of Government from the white masters and if the inequality persists between the rich and the poor and the landlord and the tenant, I pray to God not to give me such freedom till equality is established in His Creation. Let me be dubbed a Communist for these ideas, I damn care.” (To Make The Deaf Hear: Ideology And Programme Of Bhagat Singh And His Comrades, S Irfan Habib, p 28)

“The present situation demands of us a clear and responsible programme of revolution. Just before the revolution of October 1917, Lenin mentioned three necessary conditions of a successful revolution:

Political and economic situation. The spirit of rebellion among the masses. A revolutionary party, fully trained to lead the masses at the decisive hour.

In India the first condition has already been fulfilled while the other two are waiting for complete realisation. To work for their fulfilment is the first task of every fighter for freedom and the programme should be worked out with this end in view. An outline is given below:

In the manifesto of the NBS, Bhagwati Charan and Bhagat Singh included two points specifically aimed frontally against communal politics: a) “to have nothing to do with communal bodies or other parties which disseminate communal ideas” and b) “to create the spirit of general toleration among the public considering religion as a matter of personal belief of man and to act upon the same fully.” Aspiring members were made to sign a pledge that they would place interests of their country above those of their community.

Here is what the NBS further said:

“…a branch of peepal tree is cut and religious feelings of the Hindus are injured. A corner of a paper idol, tazia, of the idol-breaker Mohammedans is broken, and ‘Allah’ gets enraged, who cannot be satisfied with anything less than the blood of the infidel Hindus. Man ought to be attached more importance that the animals and, yet, here in India, they break each other’s heads in the name of ‘sacred animals’.”

What would India be like today if these words from the NBS Manifesto had been taught to every child in India?

Comrade Durga, also Vohra’s wife, is known for her role in creating and maintaining disguises for the comrades, helping to transport bombs in the folds of her sari, and especially in planning Bhagat Singh’s escape with him as an anglicized gentleman and herself disguised as his wife.

The lives, sacrifices and martyrdom of the HSRA comrades and their unfinished dream of a socialist India free from every inequality and exploitation still call out to us as a challenge. 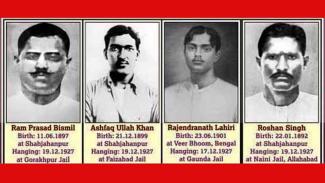