During the hearing of the case filed in the Patna High Court by CPIML Bihar State Secretary Kunal regarding the demand for Rs 4 lakhs compensation to each of the families of persons who died during the Covid period, the High Court has sent a notice to the Bihar Health Secretary.

Advocate in the case Basant Chaudhury said that the government has been given 2 months' time. We have submitted to the court the list of people who died in the Covid period, as collected by CPIML. Most of the deceased persons had symptoms of Covid, and those who did not have symptoms died untimely deaths due to lack of timely treatment as the health services had broken down; therefore, our argument is that all such people have a right to compensation.

CPIML State Secretary Kunal said, we will confront the government on all fronts. The government cannot run away from its responsibility because it is due to governmental negligence that people lost their lives on such a large scale. These deaths could have been prevented if the health system had functioned properly and oxygen, beds etc had been provided on time.

Meanwhile, various organizations of rural doctors in Bihar held a meeting in the CPIML legislative office in Patna on 20 November 2021 under the banner of the Community Health Care Services Federation. The meeting was attended by CPIML Bihar State Secretary Kunal, Dumraon MLA Ajit Kushwaha and other representatives of rural medical organizations.

Speaking on the occasion State Secretary Kunal said that during Covid times it was rural doctors who saved people’s lives, but it is extremely disappointing that the government’s attitude towards this section is insensitive to the highest degree. Our governments have made it a policy to extract work from people without giving them wages and dignity. Our party is with the protesters on all such issues. CPIML will fight inside the Assembly as well as outside for demands of rural doctors relating to health services appointments as well as other demands. Ajit Kushwaha said that about 21000 rural doctors have passed the community health eligibility course run jointly by the state health committee and NIOS. The government had also verbally promised these people that they would be appointed in the state health service system. But so far neither Regulatory nor Council has been set up. This is extremely insulting. We shall forcefully raise the issue of this injustice to and betrayal of rural doctors in the Assembly.

It was decided at the meeting to gherao the Vidhan Sabha on these issues on 1 December 2021. 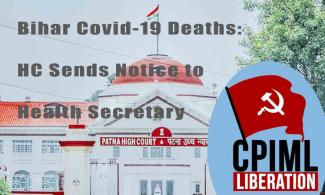