Jean Luc – Godard is no more! We have lost the rebellious icon of French Cinema who has left an astounding legacy of seven decades of filmmaking.  It is probably not going to be a hyperbole if we theorize film history into two epochs – cinema before Godard and cinema after Godard. As the master filmmaker once famously said, “Let’s do what has not been done”.

One of the most prominent film-loving communities in the history of cinema emerged in the newly liberated France after the Second World War. The audiences were enthralled by many Hollywood and foreign films, which previously the German-occupation in France had banned during the war. A group of young French film critics like Godard and his friends François Truffaut, Claude Chabrol, Eric Rohmer and Jacques Rivette emerged, who went on to enthusiastically watch, discuss and write about films from diverse cinemas of the world. They also thoroughly criticized the then mainstream, studio-bound and literary French cinema, standardized by the established filmmakers, scriptwriters and technicians.

From the late 1950s, Godard and others went on to make films, pioneering one of the most iconic film movements in cinematic history, the French New Wave. In their encounters with the rich and varied history of world cinema, the French critics explored the possibilities of experimentations and innovations in the film language. Their critical eye, mastered through passionate and obsessive film viewings and a deep engagement with cinema discourses, found its way into the cinematic creations of the French New Wave. François Truffaut’s debut film Les 400 coups (The 400 Blows), which narrates the story of a young runaway vagabond, Antione Doniel, won the prize for direction at the Cannes Film Festival. Jean-Luc Godard’s famed provocative work A Bout de Soufflé (Breathless), the story of a petty criminal, was released in 1960.

The most important characteristic of Godard’s films is the deconstruction of conventional film language. He disrupted all standardized systems of pleasure and anticipation associated with mainstream cinema. For instance, film scholar Jim Hiller wrote about Godard’s Breathless: “Godard’s first feature, A Bout de Soufflé (Breathless) helped announce the definitive arrival of the nouvelle vague (new wave), provoking both exhilaration and consternation by its wayward story and its cinematic treatment — fragmented narrative, long, often handheld, mobile takes; jump-cut editing. Godard rapidly became the enfant terrible of the French New Wave, committed to formal experimentation and rejecting script-based filmmaking. He often began a day’s shooting with a few notes and ideas and improvised both script and camera work… radically questioning conventions about style and meaning, sound and image.”

In cinematic history, the French New Wave remains a movement that significantly questioned the conventional cinematic language and wielded substantial influence on the landscape of global cinema, especially in inspiring various other subsequent new waves — from Germany, Brazil to India. In India, directors like Mrinal Sen were significantly inspired by the cinematic experimentations of the French New Wave in his early works. French New Wave filmmakers like Godard and Truffaut redefined the grammar of cinema. They explored diverse possibilities of the cinematic medium to break the conventions of standardized filmmaking practices. Their works offered significant spaces of resistance against the Hollywood domination and inspirations for furthering future cinematic innovations and experimentations.

Just after the death of Godard, a screenshot of his brief speech during 1968 Cannes Film Festival went viral on social media platforms. Godard and Truffaut led protests that shut down the Film Festival in solidarity with students’ and workers’ agitations in 1968. In the screenshot, we can see an angry Godard saying it bluntly to the reporters: “We are talking about solidarity with students and workers and you are talking tracking shots and close ups! You are idiots!”

Godard not only redefined the grammar of cinema, but also his films were never afraid to make piercing political commentaries. Godard’s Contempt (1963) presents a scathing critique of monetary philosophy of the mainstream film industry, his Alphaville (1965) depicts the horrors of the technocratic dictatorship in a machine run future city, and he takes political position against United States military aggression in Vietnam in his Pierrot le Fu (Pierrot the fool, 1965). Godard’s suspicion and hatred for the capitalistic system always remained pungent as he once remarked, “Every film is the result of the society that produced it. That’s why the American cinema is so bad now. It reflects an unhealthy society.” 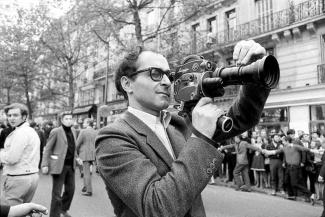