In early March when the BJP managed to retain power in Uttar Pradesh for the second term in a row, the victory was attributed among other things to the delivery of food among the poor to mitigate the extreme economic hardship caused by the cruel lockdown. ‘Labharthi’ or beneficiary of various welfare and assistance schemes became a key talking point for poll analysts. With the elections over, the discourse is fast changing and quite ominously so.

Bulldozer has emerged as the latest symbol of the BJP model of governance and politics. The courts are being bombarded with cases seeking to alter the character of historic mosques and monuments. There is a clamour to change the 1991 law declaring the nature of places of worship as they stood on 15 August 1947 as final and unchangeable. And in a rather surreptitious move, a sinister countrywide campaign has been unleashed to cancel ration cards, even intimidating card holders to ‘surrender’ their cards.

In several districts of UP, notices were issued by the district administration asking ‘ineligible’ ration card holders to surrender their cards within 20 May, with ineligibility being defined as something as basic as owning a pucca house or even a motorbike, or having an annual income of Rs 2 lakh in rural areas and Rs 3 lakh in urban areas. The ‘ineligible’ card holders were threatened with punitive measures including criminal cases and recovery of penalty at the rate of Rs 24 for every kilogram of wheat and Rs 32 for every kilogram of rice for the ration drawn on the card.

In the face of protests, the state government denied having issued any such notice, calling it a routine verification under the Food Security Act.  But tens of thousands of people have already been tricked and terrorised into surrendering their ration cards. In Uttar Pradesh, the department of food security is looked after directly by Chief Minister Yogi Adityanath. In Bihar, close to three million cards have already been cancelled. The methods adopted for cancellation vary in different states. In Karnataka, about 2.2 million cards have been ‘suspended’ on the pretext of non-completion of e-KYC process or furnishing of biometrics. Some half a million card-holders have been dubbed ineligible and half of these cards have already been cancelled The large-scale cancellation of ration cards is clearly the first step towards a serious dilution and dismantling of the public distribution system. This is a corollary to the Modi government’s design of corporate takeover of agriculture. Even though the government was compelled to repeal the three farm laws, the design is being pursued by all means. The current situation of India’s wheat procurement and distribution illustrates this design quite graphically. The Russian invasion of Ukraine in late February created a major disruption in global wheat supply and wheat prices began to shoot up in the international market.

Against this backdrop, India’s wheat exports jumped majorly from a little over 2 million tonnes in 2020-21 to more than 7 million tonnes in 2021-22. For 2022-23, the government has set its target above the ten million tonne mark. In April alone, the first month of the fiscal year, exports crossed 1.4 million tonnes. This is when Modi was telling Biden that India could feed the world. Even in early May Modi repeated the same line during his visit to Denmark. Alarmed by the developments in Sri Lanka and growing popular discontent at home over soaring fuel and food prices, the government has now announced a temporary ban on wheat exports.  But there are already signs of the restrictions being relaxed and with prices in the world market continuing to rise, the export restrictions can only be seen as a temporary arrangement.

The growing emphasis on export has meant a significant drop in procurement. The current Rabi Marketing Season all-India wheat procurement is the lowest in last 12 years (at about 180 lakh metric tonnes in the current RMS, it is less than half of the previous year’s quantum). The share of FCI in total official procurement has dropped to an all-time low of 5.51%. It is not difficult to understand why the regime is now in such great rush to cancel as many ration cards as possible. The wheat allocation under PMGKAY has been reduced and in several states the government is reversing the wheat and rice ratio to provide more rice and less wheat. With ration cards cancelled and quantity of wheat allocation reduced, people will have to depend on open market purchase at much higher rate and this can only result in further reduction in food security and increased hunger.

As things stand, India already figures at the global bottom in terms of both Global Food Security Index and Global Hunger Index. In GFSI, India ranks 71st among 113 countries and in GHI India ranks way worse – 101st out of 116 countries. It is therefore not difficult to assess the adverse impact of the ongoing dilution of the public distribution system and the systematic cancellation of ration cards. The concept of food security and food right should be universal, but India adopted the targeted approach resulting in greater exclusion of the poor given the high degree of targeting error and massive social and economic inequalities that further restrict the access of the needy and the marginalised to these targeted benefits.

Today large sections of Indian people are reeling under the combined economic burden of the pandemic and its adjunct, the cruel lockdown, and the resultant erosion of income and livelihood. The need of the hour is greater income and food support for the needy, and the government is doing just the opposite by snatching ration cards and promoting food insecurity and hunger. After demonetisation and lockdown, the ration card cancellation drive and surrender threat is a massive blow to India’s deprived millions. 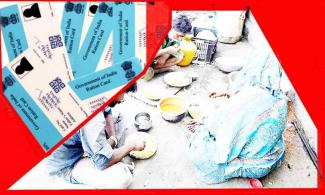 Land Reform And An Egalitarian India

The Struggle of Daily Wage Workers For…

Foil BJP’s Plans to Bulldoze India For Another…