Remembering The Revolution at Ghanta Ghar

I can never forget that morning of 27 January 2019 when I reached the Ghanta Ghar dharna, my heart full of wonder and eagerness.

This dharna had been started by women at Ghanta Ghar in Lucknow against CAA-NRC on the lines of Shaheen Bagh. At that time I was with my son in Gurgaon. As soon as I heard the news I yearned to go to Lucknow! And somehow I did manage to get there, and reached the dharna spot on the morning of 27 January. The venue was awash with the pleasant winter sun and I saw that hundreds of women were sitting on the ground in front of the steps.

A stage had been built on top of the steps, women were sitting on some of the chairs, there was a dais and a mike. A young girl full of enthusiasm and energy was at the mike, speaking and raising slogans. Many women recognized me as I was associated with Unity College. Soon I was taken by the women to the mike.

With tears of love in my eyes, my voice thick with emotion, I was face to face for the first time with the people who were going to be part of my existence for the next 3 months!

That was it, I would go every morning to the dharna spot and return in the evening. Ghanta Ghar became my school, my college! Those simple women became my most important teachers! They were that section of society who had never gone to school. They had hardly ever even crossed the threshold of their homes, had hardly ever met people who were not family members! They were women who did household chores all day long. But there was a longing within them to know the world, to achieve something new. They had the strength to face storms, rains and extreme heat.

Over the mic, I used to tell them every day about women from the past who did important work but have been wiped away from the pages of history, like Savitri Bai Phule, Fatima Shaikh...they used to listen with great attention, and even ask questions afterwards.

I told them, whoever among you can write, please do write. And many among them started coming up to the mike and presenting their poems, stories, ghazals etc. They used to make beautiful paintings and embroidery and show us all. They had found a place to showcase their talents! Some sang beautifully, some were excellent at acting and theatre. When they raised slogans, their zest, their energy was a thing worth seeing, as was the courage they displayed when they held a march. Their discipline in matters of food, refreshment, bath, work etc was exemplary. And when the police came, what courage and cheer they showed!

When it rained, their patience and perseverance was something to see.

If one of their companions fell ill, how anxious and troubled all of them became! When any of the women on dharna died, their grief knew no bounds. There was also a small library where women interested in reading used to come and read books.

They used to make such creative posters, such creative models! They celebrated Holi with great enthusiasm, and they also celebrated New Year all together. They had risen beyond 'Hindu-Muslim'. I even saw transgender persons amongst them; for the first time they got to see and know trans persons closely, and there was so much love exchanged! What's more, they even developed an affectionate relationship with the women police personnel deployed there! So affectionately they used to ask me, madam, about whom are you going to tell us today?

Here, I got the opportunity to meet great activists, great social workers, writers and poets.  If I were to write about them all it would become a book!

On 15 March when the movement had to be put on hold due to Covid, my eyes were tear-filled. My greatest regret was for the women who would now be constrained to go back to their dull routine lives.

I have lived my life to its near completion, but I have this to say to young activists: please do, do organize such programs where the simple, common woman can participate and bring out her creative talents, meet and smile with everyone, laugh out without restraint...for her such programs will be no less than a boon! 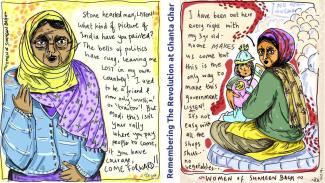