(At a glance, Nirbhay shows you how the Modi regime has been undermining parliamentary decision-making.)

“The power to make an ordinance is to meet an extraordinary situation and it should not be made to meet political ends of an individual. Though it is contrary to democratic norm for an executive to make a law but this power is given to the President to meet emergencies so it should be limited in some point of time.”

Goodbye Parliamentary committees – In the 16th Lok Sabha (2014 to 2019), only 25% of the bills were referred to parliamentary committees which was much lower than the 71% in the 15th and 60% in the 14th Lok Sabha respectively. Let us understand why this is a problem. Parliament scrutinizes bills in two ways. The first is by discussion on the 2 houses. This is compulsory. Since Parliament meets for around 70 days a year, there is not enough time to discuss every bill in detail on the floor of the houses. Moreover, debate in the house is mostly political and is not constructive in the sense that it doesn’t get into the technical details of the bill. The second way is referring the bill to a parliamentary committee. This ensures a detailed discussion on the bill. This however is not mandatory. Former US President Woodrow Wilson sums it up perfectly “… it is not far from the truth to say that Congress in session is Congress on public exhibition, whilst Congress in its committee rooms is Congress at work”.

Is it legal to use ordinances, to subvert parliamentary committees, to avoid public consultation of bills, to disrupt Parliament? Yes! Is it something that must be done in democracies? No! These are loopholes offered by democracy and must be used sparingly in order to avoid destruction of democracy. This regime knows how to use democracy to subvert democracy as all demagogic regimes do. 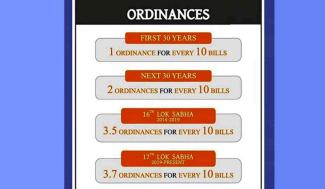