While addressing nation through video telecast on the eve of Guru Parab on November 19, Prime Minister Narendra Modi announced repealing of the three black farm laws that had fuelled the rebellion of farmers in India. These laws were a step in the direction of corporatization of the farming sector. Ever since these laws were promulgated, farmers from Punjab, Haryana and western Uttar Pradesh rallied in large groups towards the capital; stopped there, they staged a sit-in at the borders of Delhi till the laws were repealed.

The repression unleashed by the BJP government at the Centre as well as the states of UP and Haryana against the farmers’ movement bring to mind the colonial repression of peasant resistance. 7 January marks a 100 years of the massacre of peasants at Munshiganj in Uttar Pradesh.

Peasants were one of the most exploited communities suffering the consequences of the colonial expropriation. Economist Utsa Patnaik has shown how the export of grains from colonies to Europe at the cheapest possible cost was central to colonial rule.

The British colonial administration brutally repressed the peasant movement and collaborated with the feudal Taluqdar forces. Protesting against the exploitative working condition, rentism and taxation of Taluqdars under colonial rule, the farmers movement in Awadh region of the then Central Provinces began in different areas. Awadh region witnessed the cruelest form of feudal atrocity in India. Pratapgarh, one of the important centres of the peasant agitation inspired other places for protest.

Baba Ram Chander, a Fiji-returned kisan leader formed the Kisan Sabha in 1920 in Rae Bareli. Farmers from all religious communities came together in class solidarity to fight the feudal-colonial nexus. Several Kisan leaders were arrested by British administration whose interests were served by the feudal Taluqdars. In Fursatganj, Rae Bareli, a farmers’ gathering was met with police brutality killing six. Rumors about kisans looting the market were also planted by administration to delegitimize their agitation. Protesting farmers marched towards the district headquarters in large numbers from different areas. Massive deployment of colonial police met the marching farmers on a bridge made over Sai River in Rae Bareli. They brutally fired on the farmers’ march, killing many. The Sai River was full of dead bodies of farmers and their blood. Freedom fighter and journalist Ganesh Shankar Vidyarthi described this as the second Jallianwala Bagh massacre in his newspaper Pratap. Despite the attempts of British administration and Taluqdars to suppress the news, it was published which led to massive dissatisfaction against the colonial rule. Finally the British administration brought land-related laws in 1922 meeting some of the demands of the farmers.

The British administration served the interest of hereditary feudal Taluqdars who enjoyed a royal life through rent, taxation and ownership of lands. This brought poor tenant farmers into economic crisis pushing them to protest. The nexus between the British colonial rule and the Taluqdars is comparable to the nexus between the Modi regime and the Ambani-Adani type corporations. Farmers’ resistance, inspired by over a hundred years of anti-colonial and anti-feudal struggles, could humble the Modi regime. 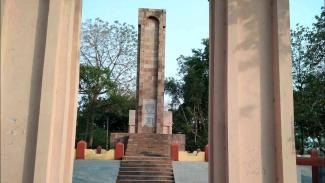