The sheer brutality of abusing, hitting and murdering one’s partner and then chopping their body into several pieces in an attempt to dispose while carrying on with one’s life is chillingly disturbing, and yet this is neither infrequent or distant. Violence against women in an intimate relationship space is a disturbing reality that remains extremely difficult to expose and challenge for many reasons. Several of these can be seen leading up to and in form of responses to Shraddha Walkar’s abuse and murder.

It is true that in many families across faiths and castes, male children through processes of observation, social conditioning and direct instructions, recognise their privilege and ‘entitlements’ very early in life. While there are many who in their life journeys also reflect and unlearn, the fact remains that once established, privileges and entitlements are not easily unlearnt or given up. When we reflect on incidents like Shraddha’s murder, what is important is that we also evaluate our own roles in strengthening or diluting this misogynist, toxic and alienating contexts that women often find themselves in. In this particular case, what could have pushed a young girl who could fight her family for love to accept abuse in a relationship? If she could have gathered courage to walk out of her parental home when her choices were not supported, why could not she gather to courage to walk out of an abusive relationship? In cases like these, we often forget that for women, acts of self-made choices come with great costs and at great risks. Some may argue that perhaps it is these very risks that parents try to warn their daughters against and that the risks become inevitable when the parental concerns and warnings are defied. This is a deceptive argument. If I were really keen to protect my daughter from the risk of entering a violent, suffocating relationship, I would be keener to get to know the potential partner. I would want to keep the channels of communication open with my daughter to ensure that in case of any abuse or concern, she can come to me. I would want to assure her that she never needs to accept abuse from anyone. When parents cite religion, caste, class, ethnicity, etc. as reasons to refuse their children the right to choose their partners, they are in fact telling their children that they do not even care to get to know someone who makes their child happy or feel loved. They lose the opportunity to recognise real red flags if any. In fact, far from protecting their children from risks, they heighten the risks by removing the existing support and security network at a time when new relationships are being explored and formed. For a young girl who moved into a new city, whose family had cut ties with her for the choice of partner she made and who along with her partner was facing financial struggles, could walking out of an abusive relationship been easy? Whom could she have turned to- Her family with whom she had been out of touch and who till months after her murder were not aware of her absence? Friends, who despite their concern, may or may not have been in a situation to offer her an unconditional abode? Neighbours, who may already have been judging her for living in? Or the police, to whom if she had complained may have first chided her or shamed her for her ‘morals’ (going by innumerable such incidents of victim blaming in the past) before even registering the complaint. Given the larger political climate, I also wonder, if she was worried about the larger repercussions on her and her partner given their inter-faith relationship. None of these create easy conditions for standing up against abuse and walking out. On the contrary, they often heighten men’s confidence that they can get away with abusing women, especially their partners.

There are many including several in the ruling party who while expressing shock over the murder have found in it an opportunity to discredit young women who show the courage to stand by their choices. Kaushal Kishore, the Union Minister of State for Housing and Urban Affairs, cautioned young ‘educated’ women against “live-in relationships”. Isn’t this another way of warning women that if they want to choose their partners and delay or refuse the institution of marriage, then the state will not guarantee their safety and wellbeing? This statement, apart from being extremely misogynist, patriarchal, anti-constitutional and indicative of the government absolving itself of the responsibility to safeguard women, is also gravely misinformed.  It appears to suggest that it is only women who refuse the institution of marriage or defy the parental dictates of whom to marry, who become victims of domestic abuse. The statement is an attempt to erase the brutal history and the present of domestic violence that several women who married as per the family’s choice continue to face. Are women who married grooms approved by their families and communities not harassed, beaten up or burnt for inadequate dowry or for not being able to produce a male heir or for speaking up against any form of humiliation and oppression at home?

Then there are those in the government and media who have used this moment to cast aspersions against inter-faith love relationships by once again raising the false bogey of love-jihad. The facts emerging in the case themselves disprove any such claim since a key point of contention between the couple apparently was not the boy’s insistence on conversion before marriage but unwillingness to marry at the moment. However, the raising of the love-jihad slogan, a slogan that has time and again been proved false and misguided, is not even intended to reflect the facts of the case. It is aimed to vitiate the atmosphere, to make the minorities still more vulnerable and to continue to deny women their agency to love.

Both these attempts, far from helping strengthen the struggle against domestic and intimate partner violence instead contribute towards nurturing the toxic, suffocating and alienating situation that Shraddha found herself in. The recent Supreme Court judgement acquitting the accused in Kiran Negi’s rape, kidnapping and murder case shows how our investigation and judicial systems continue to fail women time after time. In Kiran Negi’s case, the acquittal of the accused was ensured by the numerous procedural lapses by the police and the prosecution. In such context, it is not just ironical but rather insidious, when  someone like the Assam CM, while campaigning for the BJP in Surat, Gujarat, says- "Vote for Modi - without a strong leader in the country, murderers like Aftab will emerge in every city and we will not be able to safeguard our society.” For one, Modi is the PM while this incident has happened and second, he is the head of the same government that approved the premature release of 11 convicts serving a life sentence for raping a 5 month pregnant woman and her mother in Gujarat.

As more facts emerge in Shraddha Walkar’s murder case, it is important to remember that the struggle for ensuring justice for Shraddha Walkar is also a struggle against the forced trade offs between- safety and choice, and wellbeing and freedom, that are imposed on women. And for this, we must remain alert towards any attempts to manipulate and divert an anger that is rightfully directed at violence against women, towards a community or women’s right to choice. 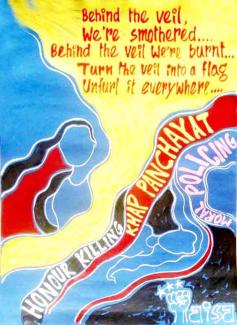