In a historic victory to the Powrakarmikas (sanitation workers) across Karnataka, the BJP-led government at the State has agreed to recognise them as permanent workers, and acceded to other demands. After a four-day long strike held across 31 districts, by various categories of powrakarmikas – including sweepers, auto drivers, helpers, loaders, UGD workers – their demand for permanency instead of being artificially distinguished under the direct-payment system, sham contract, daily wagers has been accepted. The workers, as a part of their strike, refused to collect or dispose of garbage over these four days, which brought the State to its knees. The unity of all sanitation workers of the state and their unions was another major reason for the victory.

The BBMP Powrakarmikara Sangha, Karnataka Pragatipara Powrakarmikara Sangha (both affiliated to AICCTU) and other sanitation workers’ unions across Karnataka jointly organised this indefinite strike from July 1st 2022 onwards, with a single point agenda of seeking permanency of their jobs. The strike resulted in a pathbreaking success on July 4th, 2022. The workers who have been relentlessly fighting for their dignity and rights through decades of their service, and who were risking their lives for the lives of the public during COVID-19 crisis, have won a hard-fought battle today. A majority of these workers belong to the Dalit community and are predominantly women, thus making this victory more significant!

A Long and Consistent Struggle

"This is a dream come true. We have been working since the time our wages was Rs. 400. Our Union has been able to achieve this today, because of our consistent efforts to unionise the women," said Com. Rathnamma, the General Secretary of the BBMP Powrakarmikara Sangha, in celebration of the victory of their successful strike.

While India celebrates its progress in various arenas including science, technology and innovations, Powrakarmikas across the State are employed in the most scientifically backward, inhuman and primitive form of garbage collection and street sweeping. Bending their backs to sweep and push broken down push-carts, handling all forms of rotting garbage and human waste with their bare hands, this workforce of more than 50,000 Powrakarmikas work from 6.30 AM to 2.30 PM every single day of the year to keep the towns and cities clean and protect the health of the residents. With the exception of Bengaluru and Mysuru, in all other Urban Local Bodies (ULBs), the work of both sweeping and maintenance of underground drainage (UGD) including cleaning of manholes and sewers are performed by the same set of Powrakarmikas, which is nothing but manual scavenging. Furthermore, in addition to garbage collection and street sweeping, Powrakarmikas are also compelled to do manual scavenging by clearing human excreta and animal carcasses lying on the roads, which goes unnoticed and unaddressed. Admittedly, one-third of the urban households in the state are connected to sewers, while the rest directly dump human excreta into the open drains or use septic tanks. In Karnataka, the 2011 Census found that 48.5% of the 13,179,911 households, 63,92,257 households had no latrine facility. The human excreta that is discharged into drains as well as the excreta from open defecation are cleaned by these Dalit Powrakarmikas.

Even today, there are sanitation workers who have been employed since the  payment of daily wage was the system in vogue. This was later replaced by another exploitative system, that of imposition of a sham intermediary, called a contractor. After having collectivised two decades ago, these workers began their struggle for payment of minimum wages, abolition of contract system, and thus permanency of jobs. In 2017, when the workers waged a struggle for the abolition of contract system, the State Government, led by the Congress then, had brought only the sweepers under the direct-payment system, whereas those workers engaged in garbage collection and transport continued to be exploited under the illegal contract system. Since then, the workers have been demanding that their jobs be made permanent, so that they are able to enjoy job security, wage security, social security, among other benefits that accrue to a permanent worker.

The workers who were brought under the direct-payment system still face a number of issues. They are not paid wages on time, their ESI and EPF dues not deposited, no maternity benefits or retirement benefits provided to any worker. Many workers who retire do not earn pension and have become homeless post their retirement. Com. Abraham says that most of these workers have resorted to begging after they are retired. “The BBMP said they would pay them a pension and have utterly failed to do so. They do not have a job and neither do they have any pension. These aged workers have rendered 25-30 years of service only to be thrown to the streets now,” he says.

Com. Rathna, the Vice-President of BBMP Powrakarmikara Sangha notes that the contract system is continued in a covert manner to subvert the rights of workers. “The sweepers in front of Vidhan Soudha (where the Legislative Assembly is housed in Bangalore, the capital city) are working under sham contract system, earning Rs. 8,000 per month without any ESI or EPF facilities. The contract system for sweepers was abolished in 2017 itself. How can such injustice be perpetrated in front of Vidhan Soudha?” she asks.

Com. Gangamma, the Joint Secretary of the Union, said that the current Chief Minister saw them sweeping the roads every single day in front of his house. "But it took our massive collective efforts for him to notice we exist and we will demand for our rights," she said. In a joint initiative, the various sanitation workers’ unions across Karnataka representing workers involved in solid waste management as well as UGD maintenance came together and mobilised thousands of workers across the State. While about 15,000 workers gathered at Bengaluru’s Freedom Park on each day of the four-day strike, workers in other districts protested outside the office premises of their jurisdictional urban local bodies, and in unison demanded permanent jobs.

Com. Keesu Naik, Vice-President of Karnataka Pragatipara Powrakarmikara Sangha said, “Even though a meeting was held with the Chief Minister on July 1st, no written assurance was forthcoming. So, the workers across the State unanimously decided to continue their strike. How can we believe the government, when all they have done is ignore our sweat and labour? They have consistently tried to divide us into categories like sweepers, drivers, loaders, DWCC workers, etc. The drivers and loaders continue to be under the sham contract system, the sweepers continue to face untimely payment of wages and other issues pertaining to job security, social security.”

On Monday, 4th July 2022, the Karnataka Government finally gave in to the demands of the workers and agreed to make their jobs permanent after setting up a committee which will include representatives of powrakarmika unions that will come up with the rules for their appointment. The committee will also look into implementation of ‘equal pay for equal work’ for the workers. To enable the implementation of the committee’s recommendations, the legislative assembly will propose a special law in its upcoming session. The government has also agreed to bring auto drivers, helpers and loaders under the direct-payment system in all other districts of Karnataka in a phased manner, except for those workers in Bruhat Bengaluru Mahanagara Palike (BBMP), who will continue to remain under the exploitative sham contract system. Our Union, AICCTU, will continue to fight against such illegal and exploitative contract system and will continue to strive towards ensuring rights and dignity for all.

The government has also agreed to implement IPD Salappa report in terms of the population to sanitation workers’ ratio (500:1), as also provide educational scholarships for children of powrakarmikas, implement a housing scheme, maternity benefits, among other service benefits.

With these assurances, the powrakarmikas are hopeful for a better future. But they know that the struggle is bigger than the fulfilment of economic demands. The workers have consistently undertaken struggles not only to seek recognition of permanency of jobs, and better working conditions, but also for equality, justice, and most importantly – dignity. 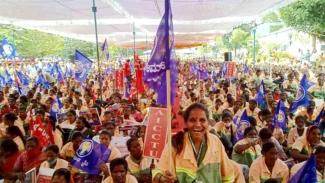