More than 600 families of the Gyaspur Slum in Delhi were forcibly displaced from their homes on August 8th, 2022, after being served a short notice of two days by the Delhi Development Authority (DDA). Now, when the country is celebrating its 75th year of Independence, thousands of people have been rendered homeless, forced to live under the open sky, and without access to food, water, toilet or electricity.

A Citizen's Protest was held in front of DDA headquarters, Vikas Sadan, in Delhi on August 10th, with the demand of stopping evictions of poor and immediate rehabilitation of all evicted families. CPIML leader Sucheta De said that more than 1,000 people, including elders and infants are under the open sky without electricity, food or water as DDA demolished their houses in Gyaspur. They have been displaced because the land is needed for recreational park. How much anti-poor can the governments be?

Earlier, a team of AICCTU-AISA-CPIML visited the Gyaspur area, a 40-year-old slum near Sarai Kale Khan, where more than 600 people belonging to families of daily wage labourers reside. They have been pushed onto the streets or temporary shelters.

In the beginning of 2022, after attempts by the Delhi Development Authority (DDA) to demolish the slums; and following protests by the slum-dwellers, workers’ unions, the Delhi High Court had issued a stay order on the demolitions on June 28th, 2022. Unfortunately, the stay order has been vacated by Delhi High Court in regard to Gyaspur.

CPIML has been standing in solidarity with the residents of Gyaspur Slum in their struggle against demolition and displacement. The slum-dwellers were asked to relocate themselves to “rain baseras” (temporary shelters) located as far away as Dwarka or across the river at Geeta Colony. The demolitions had been scheduled as soon as the judgement came out, giving the residents little time to organize themselves and to file another legal appeal. Relocating to Dwarka or Geeta Colony will now also affect their already precarious livelihoods and the education of their children.

The Delhi Urban Shelter Improvement Board (DUSIB) Rules categorically state that any resident of a slum who has been staying in the area from before 2015 cannot be evicted without proper rehabilitation measures being undertaken, and the same has been adopted by the DDA. Moreover, the 2019 Delhi High Court judgment of Ajay Maken vs Union of India states that no one can be evicted without first being provided with rehabilitation. It is up to the DUSIB and the central/state governments to ensure in situ rehabilitation

The right to housing is a major question in urban and semi-urban areas which are growing in numbers and population by the years. The question is significant enough for political parties like the Aam Aadmi Party to make election promises like “Jaha Jhuggi Waha Makan”. Yet those promises run hollow when it comes to implementation. The Union government, of course, has been running a bulldozer raj as part of its lopsided development policies and its veritable war on the poor and the working people.

Earlier evictions also took place in the name of environment protection, which was equally problematic. As was seen in Khori Gaon, private hotels are allowed to exist in ecologically sensitive zones, whereas, working class residences are demolished.

CPIML has demanded that the evicted residents be immediately rehabilitated, all impending demolitions be halted and to ensure in situ rehabilitation of all slum dwellers. 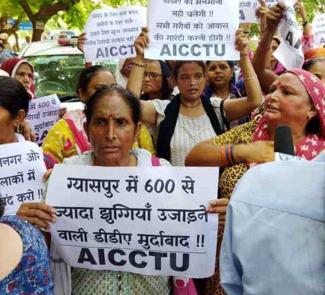