On the 75th anniversary of India’s independence, 11 men sentenced to life imprisonment for murdering 7 Muslims and gang-raping a pregnant Bilkis Bano, walked free because the Gujarat Government chose to remit their sentences.

They had committed their crime during the Gujarat 2002 anti-Muslim pogrom (which happened when PM Modi was Gujarat CM).

What was the basis of the Gujarat Government’s decision to free those men on 15 August 2022, to celebrate what the PM Modi calls India’s “Amrit Kaal”? Was remission and freedom a reward for rape and murder of Muslims? Is it because one of the women who fought for justice for Muslims killed or raped in the 2002 pogrom, Teesta Setalvad, is now in prison because she helped Zakia Jafri petition Supreme Court hoping to hold the Government and police machinery of the day responsible for acts of omission and commission that allowed the pogrom to take place? The conviction of communal killers and rapists is after all an aberration in India, not the rule. Does the remission intend to restore the rule of impunity for communal killers and rapists?

Today it has become commonplace for Hindu-supremacists to openly give calls for genocide and rape of Muslims - without any consequences. The decision to free Bilkis Bank’s rapists emboldens such men and their followers to act on their threats.

In India, the “Godi media” anchors (propagandists for the Modi regime and the BJP) like to accuse feminist activists and women’s movement organisations of being “soft on rapists” because we oppose death penalty for rape. In this case, Bilkis herself had said that she would not demand the death penalty, since she opposed it on principle. Now that the gang rapists are being set free after a mere few years of prison, and will not even serve their life sentence, what do those anchors have to say? Will they amplify Bilkis’ demand for justice?

Will the PM Modi and Home Minister Amit Shah care to comment on this decision? Are we really to believe that this decision was taken without the blessing of these two topmost leaders of the BJP?

India at 75 became a day of shame for India’s women, because the ruling BJP chose to make it a day to free Bilkis’ rapists.

“The Trauma of the Past 20 Years Washed Over Me Again” 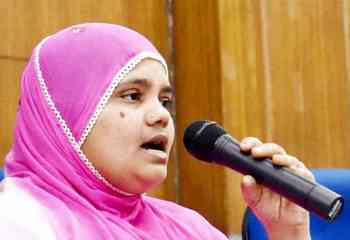 “Two days ago, on August 15, 2022, the trauma of the past 20 years washed over me again when I heard that the 11 convicted men who devastated my family and my life, and took from me my three-year-old daughter, had walked free. I was bereft of words. I am still numb.

Today, I can say only this – how can justice for any woman end like this? I trusted the highest courts in our land. I trusted the system and I was learning slowly to live with my trauma. The release of these convicts has taken from me my peace and shaken my faith in justice. My sorrow and my wavering faith is not for myself alone but for every woman who is struggling for justice in courts.

No one enquired about my safety and well-being, before taking such a big ad unjust decision.

I appeal to the Gujarat government, please undo this harm. Give me back my right to live without fear and in peace. Please ensure that my family and I are kept safe.” 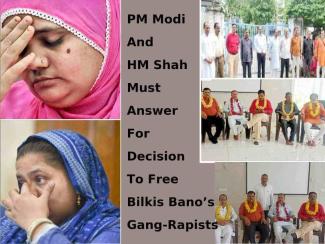