On Thursday September 8, Prime Minister Narendra Modi, speaking at the newly inaugurated Kartavya Path at India Gate said that “Rajpath" [translated from the English Kingsway] was a symbol of slavery. Similarly, last week during the commissioning of INS Vikrant, Modi unveiled a new Indian Navy flag in which the old St George’s Cross was dropped and a new insignia was added. Again, the PM's office said that this change was an attempt to move away from India’s colonial past.

The very day after changing the name of Rajpath to Kartavya Path, the Modi government has already shed its Kartavya (duty) to stand against symbols of colonialism and slavery. In an official statement, the government announced that the National Flag will fly at half-mast on September 11 as a mark of “respect to the departed dignitary.” Here the departed dignitary is Queen Elizabeth II of Britain and Northern Ireland, whose position is a symbol of hundreds of years of colonial exploitation, slavery and plunder across the world.

Elizabeth II, who was crowned in 1953, was Britain's longest-reigning monarch. She is not a mere remnant of the colonial era, but was an active participant in colonialism as Britain attempted to brutally suppress anti-colonial struggles across the world in the 1950s and 1960s.

In India, the massacre of 1857 revolutionaries, the Bengal famine, the Jallianwala Bagh massacre, the hanging of Bhagat Singh and other revolutionaries, the repression against the Quit India movement and the whole freedom struggle are just a few of the major colonial crimes committed under the royal insignia of the British monarchy. Economist Utsa Patnaik has estimated that Britain stole $45 trillion from India between 1765 and 1938.

This is the very monarchy which was carried forward by Queen Elizabeth II without any remorse, reparation or apology. How can we lower our national flag, symbol of the freedom struggle, at half-mast as a mark of respect to this central institution of colonialism?

While India freed itself from the clutches of British colonialism, countries across the world had to continue the struggle for another five decades, facing violence and massacres at the hands of British forces enforcing the rule of Queen Elizabeth II. During her reign, she oversaw the brutal suppression of the Mau Mau freedom movement in Kenya during the 1950s, leading to the massacre of tens of thousands of people. More than 20,000 Mau Mau members were summarily executed and a large number of people were sent to concentration camps by British colonial authorities. Veteran survivors of the rapes and horrific torture in these camps are today still seeking justice.

There are consistent attempts to ‘whitewash’ and dissociate the Queen from these colonial crimes by portraying her as the ‘rock’ of modern Britain. But the blood on the throne of the British monarchy (no matter who sits on it), can’t be washed off, representing as it does hundreds of years of colonial atrocities across the globe.

Today, we are celebrating the 75th anniversary of freedom ('Azadi Ka Amrit Mahotsav') as a mark of respect to the glorious freedom struggle against colonialism. Lowering our national flag at half-mast, as the Modi government wants to do, will be an insult to the sacrifice of our freedom fighters who gave their blood to break the colonial shackles. By doing this, the Modi government is only proving itself once again to be the loyal legatee of the colonial rulers, the brown sahibs or 'bhure angrez' Bhagat Singh had famously warned us against. 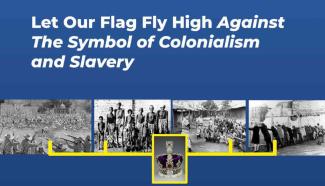