Exactly a year ago, in April-May 2021, India was gasping for breath, bodies were floating in the Ganga, crematoria were choked and cemeteries overflowing. Yet, soon, the Modi regime denied that there had ever been any oxygen shortage or any unusual or avoidable number of Covid-related deaths.

A new World Health Organization (WHO) report has made an assessment of country-wise Covid-19 deaths based on “excess deaths”. All over the world, Governments undercount Covid-deaths (not always on purpose). Actual Covid death tolls are being calculated by comparing the number of deaths in a given period in 2020-2021, with the number of deaths in the same period in 2018-2019. The difference - called “excess deaths” – gives a fair idea of the actual scale of Covid deaths. Many countries have prepared their own excess death assessments. But the Modi Government in India has instead, tried to bury information and data.

The Government of India had made such calculations difficult by refusing to make death data transparently available, compounding the already existing problem of low registration of deaths in India. It made no mortality data for 2020 or 2021 available to the WHO. Data journalist Rukmini S writes, “However Indian journalists had accessed official monthly mortality data for 18 states and UTs and made this data publicly available on a free and open portal, following which several researchers used this data to write academic papers. Owing to the inaccessibility to any data, the WHO used these numbers (which covered 70% of the country's population) and extrapolated them for the rest of the country using a documented methodology.”

The Government is rejecting the WHO report on spurious grounds, including that the compensation claims are nowhere near the Covid death figures. But as a CPIML survey in Bihar had shown, most Covid deaths had not even been backed by Covid tests – and since Covid tests were demanded for compensation, most victims’ families were unable to claim the compensation.

CPI(ML) comrades in Bihar took up the task of mapping every death in April-May 2021 in 1904 villages, based on an “oral autopsy”, seeking to know symptoms of the deceased from their loved ones. Of the 7,984 deaths that occurred in these villages in that period, 7,200 showed clear symptoms of severe Covid-19 including respiratory distress. Of these 7,200 deaths, 80.81% had never been tested for Covid, and so were ineligible to claim compensation. The official deaths registered in this period was a mere 4,612 – about half the actual number. The Covid deaths admitted to by the Government were a fraction of this number. The official Covid death fatalities figure for January-May 2021 for the whole of Bihar was 7,717 – less than the number of deaths CPIML counted in just 1,904 villages in April-May 2021 alone.

The CPIML’s Bihar survey indicates that even the WHO estimate – and any estimate based on registered death data – is bound to be a conservative one, falling far short of the actual number of deaths. 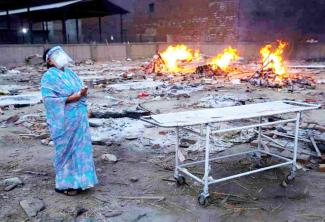