On the occasion of Dalit History Month in April 2022, Tanuja Gupta, a senior manager at Google News in the USA, invited Thenmozhi Soundararajan (who runs a nonprofit organisation called Equality Labs) to deliver a talk on the topic of caste discrimination. But two days before the scheduled talk, Google News, under pressure from various senior personnel, decided to cancel the talk. The decision was taken, ironically, by the Chief Diversity Officer of Google News, among other officers!

A Google spokesperson said that the talk was cancelled because “rather than bringing our community together and raising awareness — was creating division and rancour.” What does such a rationale imply? Would Google cancel a talk by a Black Lives Matter activist because some white supremacists expressed “rancour”? Or by a feminist because some patriarchs expressed “rancour”? The Google statement, by referring to casteist opposition to the talk by a Dalit and anti-caste activist as “division”, puts oppressors falsely on par with those resisting oppression.

There is a flourishing lobby in the US and UK of Hindu-supremacists and caste-supremacists opposing anti-caste legislation or any other forms of action. This lobby brands any recognition of caste oppression as “Hindu-phobia” – displaying the Hindu-supremacist tactic of inversion that portrays the oppressors as victims of movements against oppression.

Anti-caste activism, whether in India or in the Indian communities settled in other countries, is not “Hindu-phobic”, simply caste is not a mere “cultural aspect” of “Hindu culture”; it is a system of hierarchical oppression. Even Valmiki Dalits who identify as Hindus, for instance, protest against the discrimination and oppression they face as Dalits. Dalits who converted to Buddhism or Christianity also face oppression, segregation, and discrimination based on caste.

And what better proof of caste discrimination in the US-based transnational tech workplace than the decision to cancel a talk on caste discrimination, on grounds that such a discussion might cause “division and rancour” between defenders (and deniers) of caste oppression, and those who experience it! 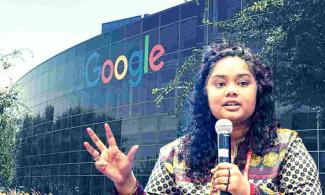