The saffron brigade's hate-spreading mechanism has now taken the form of websites and applications designed to spread communal hatred and casteism. In addition, it is the right-wing's agenda to make public spaces, both online and offline, inaccessible to women. While women, especially those who are vocal against the right-wing regime, are being viciously targeted, Muslim women are the most vulnerable to online and offline attacks. A glaring example of this is the app called Sulli Deals surfaced in July 2021 with the aim of "auctioning" off Muslim women. Hundreds of Muslim women were listed for auction along with their pictures sourced without their consent from social media apps on 'Sulli Deals'. FIRs were filed in two states, yet no arrests were made until January when the Delhi Police arrested Aumkareshwar Thakur, 26, from Indore. This structural impunity that the perpetrators received did not go unnoticed by the hate-spreading factories. Yet, another similar app called 'Bulli Bai' surfaced on the internet on the first day of the new year. Even though it was the first day of the year, the hate that women receive on online platforms is nothing new. In these cases, the attack on particularly Muslim women is a more significant orchestrated Islamophobic and sexist attack on women.

The CAA-NRC movement saw an overwhelming participation of women, especially Muslim women. They reclaimed public spaces, roads, parks and gave leadership to a movement to save the country and the constitution. However, there has been an increased attack on muslim women in the country since then. The kind of vicious slut shaming that Safoora Zargar, who was one of the key figures in the CAA-NRC protests, faced during her pregnancy while in jail is a blatant reminder of the manner in which the entire cyber cell ecosystem of the right is geared against discrediting and violating women. Such hate attacks against Muslim women have to be seen within the framework of the larger Islamophobic agenda of the right. This hate aimed towards Muslim women has been given sanction by Savarkar himself when he justified the rape of Muslim women to create hHndu Rashtra. We saw that same play out in the Gujarat riots. This hate today has taken the insidious form of cyberattacks exemplified by apps like 'Sulli Deals' and 'Bulli Bai'.

It is not just apps like 'Sulli Deals' and 'Bulli Bai' that are a cause for concern. Recently, an anonymous account on Twitter @Aarthisharma08 alleged that there existed a secret app called 'Tek Fog'. In an investigation conducted by The Wire it came to light that 'Tek Fog' is for secret use by BJP IT Cell workers only while pro players of the IT Cell were also using another app called 'Tasker'. 'Tek Fog' violates the fundamental rights of citizens by allowing IT Cell workers to hijack the 'trending' section of Twitter and Facebook thus making it difficult to differentiate between what is real and what is not. Amongst the many insidious features of 'Tek Fog' is its ability to use a database of private citizens for targeted harassment. Information about citizens is stored in the app's cloud storage categorized according to occupation, gender, caste, age, skin colour and (most horrifyingly), breast size. The app allows trolls to specifically target  people, like female journalists, and send them vulgar messages. Seen alongside 'Sulli Deals' and 'Bulli Bai' it is clear that the right is actively using social media to create hate against Muslims in the country. More dangerously, this is done to create an atmosphere of fear and danger for Muslim women so that they restrict themselves from participating in public discourses and taking up public space. This is clear in the harassment which Muslim women who are vocal against the powers to be have faced from these apps. Fatima (mother of Najeeb, the JNU student who disappeared after facing violence by ABVP men), journalist Rana Ayyub, anti-CAA Jamia student Safoora Zargar are just some of the victims of such cyber attacks.

A number of people are attracted by this alt-right wing digital ecosystem and have become a part of it in droves. The makers of 'Bulli Bai' – 18-year-old Shweta Singh and 21-year-old Vishal Jha – are just two of the thousands using digital media to establish 'Hindu Supremacy'. These people espouse a more hard-line Hindutva politics and style themselves as 'trad-wing' instead of the 'raitas' who they view as those with a 'liberal' understanding of Hindutva politics. Thus, mainstream Hindutva sympathizers, including the present government, are similar to liberals and leftists in the 'trad' political imagination, wherein they are too soft with their Hindutva politics. The 'trads' believe in narrow religious supremacy with little to no space for practical political maneuvers. In the digital space, the 'trads' use memes and jokes to propagate violence and hate against Muslims and Dalits, in line with their hard-line Savarna supremacy ideology. The worrying part is that young people willingly become 'trads' and participate in spreading outrageously provocative and hateful ideas in the digital space.

However, one must understand that there is no rigid distinction between the 'trads' and the 'raitas'. To see the 'raitas' as potential allies to the Indian Democracy and the 'trads' as the real danger would be a grave error. Recently, Dr. Udita Tyagi an office-bearer of the Bharatiya Janata Party and the BJP's women's wing: the Bharatiya Janata Mahila Morcha, in Western Uttar Pradesh; was campaigning in support of the genocide loudspeaker and hate speech accused Mahamandaleshvar Yati Narsinghanand Giri, whom she also considers to be her spiritual mentor. Clearly, this shows that the right-wing, including BJP and RSS will promote and support hate against Muslims, Dalits, and Women, and they will not be held accountable for their actions. A case in point will also be BJP's Anurag Thakur, Minister of Information and Broadcasting, who openly raised slogans to attack and kill Muslims.

Hate speech and attacks in the digital space specifically target Muslims and Dalits, and amongst them, women. This online spread and propagation of hate are easily accessible by netizens as it bypasses algorithms filtering hate speech easily. Easy access to hate online is translated into deeper prejudices and biases against Muslims and Dalits, which ultimately leads to extreme violence. The increase in lynchings and sexual violence, particularly against Dalit women, is testimony to the depth to which hate circulating online has percolated into society. However, this is not a one-way process. Hate speeches and ideas circulating in physical spaces – from drawing rooms to political rallies – push people into online spaces, allowing them to vent this hate in memes, jokes, and insidiously apps like 'Sulli Deals and 'Bulli Bai'.

Society has to fight against this hate that we consume daily collectively. There have to be strong mechanisms to fight cyber-crime. The deafening silence of PM Narendra Modi and Home Minister Amit Shah works like a pat on the back for the right-wing trolls. The hate spread in online spaces needs to be checked and stopped by the police. The normalization of hate needs to be stopped. Instead, police seem to be taking a backseat giving unfiltered impunity to these trolls. 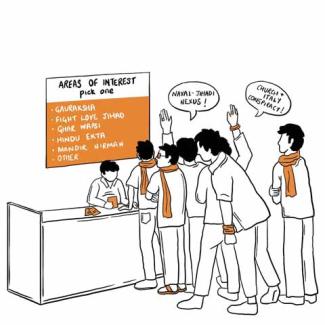