The encounter killing of the former leader of HNLC, Chesterfield Thangkhiew, on 13th August has once again put Meghalaya on the boil. Family and acquaintances of Thangkhiew have alleged that his killing was a part of a pre-planned ‘fake encounter’.

The HNLC, founded in the 1980s, claims to represent the Khasi and Jaintia population, especially against the ‘dkhars’ (outsiders). In recent years, the increasing corruption of the Chief Minister Conrad Sangma, and especially the mismanagement of the COVID19 crisis in the state has resulted in greater sympathy, if not support, for the militant movements.

Meghalaya remained on the boil after Thangkhiew’s funeral procession drew thousands of people and the petrol bombs were hurled at the CM’s personal residence. Curfew was imposed on the state on Independence Day as violence threatened to escalate as government and police vehicles were torched by the protestors. Even guns were reportedly snatched from police personnel by protestors. Home Minister Lahkmen Rymbull submitted his resignation to CM Sangma in response to the violence.

A judicial probe into the killing of Chesterfield Thangkhiew has been ordered though his supporters have refused to participate in an enquiry that they see as biased. Opposition leader Mukul Sangma also lambasted the CM for defending the police even before the enquiry was completed.

These developments once again show that custodial killings continue to be a grim reality in the North East. Coming on the heels of the Assam-Meghalaya border clash following Home Minister Amit Shah’s visit, the latest developments also underline how the BJP-NDA presence in North East seats of power and at the Centre, are contributing to tensions in the region. 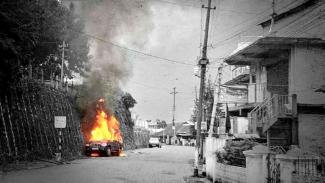