The Union Government has recently come out with a 4th draft of the Indian Ports Bill, which seeks to replace the 1908 Indian Ports Act. Previous versions of the Bill have faced strong opposition from Coastal states, which have all raised issues around the strong powers given to the Union in the new drafts, resulting in a violation of the federal structure of governance. This comes in the backdrop of the Major Ports Authorities Act, 2021 being pushed through, repealing the Major Port Trusts Act, 1963.

In India, Ports have traditionally been divided into Major and Minor ports, with 12 Major ports and over 200 minor ports. Under the 7th Schedule of the Constitution of India, Major Ports fall under the exclusive jurisdiction of Union Government to legislate, whereas minor ports fall under concurrent jurisdiction, meaning that both Union and State governments may legislate on the topic, with primacy being granted to union government legislation. Till now,  the Union retained power in respect of major ports, whereas the governance and regulation of minor ports was left to the discretion of the respective State Governments.

Like previous versions, the 2022 Bill vests vast control in the hands of the Union Government through the Maritime State Development Council [MSDC]. This body was created as an advisory body in 1997, but has only met 17 times in the 25 years since then.  Now, the Bill makes the MSDC a permanent statutory body, with a Centre heavy composition, with its own staff, fund, and broad functions, including the making of a national plan and issuance of guidelines. Importantly, the MSDC will also perform “such other functions including such administrative and financial functions as may be entrusted to it by the Central Government.”

For the first time, the Bill covers all ports, and not just scheduled ports, as in the 1908 Act. It also has a very wide definition of ‘port’, which includes “any terminal, offshore terminal, shipyard, repair yard, bunkering station, captive jetties or roadstead or port facility or single buoy mooring which is normally used for the fuelling, re-fuelling, loading, unloading, warehousing, building or repair or anchoring of vessels, or any other place at which a vessel can call, or any part of a river or channel”. Hence, the regulations being brought in by the MSDC would cover even small fishing ports or single buoy mooring.

A very peculiar balance is created in the 2022 Bill to depict a situation where the State governments still have somewhat of a say in the regulation. In fact, the third version of the Bill in 2021 made the national plan a binding plan, with drastic consequences for contravention. In view of the massive opposition to the same by, the 2022 Bill not only makes the national plan recommendatory in nature, but also prescribes that the functions of the MSDC are to be discharged in consultation with the Central Government and State Governments. Not only this but Section 83 of the Bill requires to State and Union governments to “endeavour to adhere to the national plan and guidelines issued by the Council, as it may deem fit, in all developmental works of major ports or non-major ports within the State, as the case may be.”

The 2022 Bill also mandates the creation of State Maritime Boards [while protecting those Boards already created by certain States under state law], One of the functions of the State Board will now be to ensure compliance to “any guidelines, directions, notifications or instructions issued by the Central Government, from time to time”

The government has also been given broad powers to shut down any port for any reason. Just read Section 18 below:

The Union Government’s agenda of centralisation and violation of federal principles is nothing new. It has been seen in various sectors across the board from environmental regulation to labour laws. However, the development of the 2022 Bill reveals an interesting trend of the Union government being forced to back down to some extent on blatantly violative provisions. On the other hand, a close perusal of the Bill shows that State interests will continue to be adversely effected, while most clauses that protect state involvement appear to be more in the nature of creating an aura of benevolent federalism rather that any real commitment to state authority.

A last interesting aspect to consider is on the impact of the Bill on privatisation of ports. Several commentators have argued that the Major Ports under the centre have underperformed, whereas the performance of the non-major ports has been much better. In fact, one critic notes that “Between 1993-94 and 2020-21, the cargo traffic of Non-Major Ports increased from 14 MT to 575 MT while that of Major Ports increased from 179 MT to 673 MT (MT- million tonnes)”.  It is argued that the States have been willing to adopt free-market privatisation methods, which have resulted in better commercial performance, and the Bill will deter private players. In fact, it must be remembered that the Union Government has repeatedly displayed its crony –corporate pro-privatisation agenda in respect of a number of industries / sectors of national significance. It is far-fetched that the Union is now seeking to establish dominance to protect the port sector from private influence. It seems far more likely that the Union is seeking to assert primacy to be the prime player in the privatisation game, even in smaller, non-Major ports. States must continue to challenge the bringing into force of the 2022 Bill, and must protect their valuable Constitutional rights in respect of minor ports. 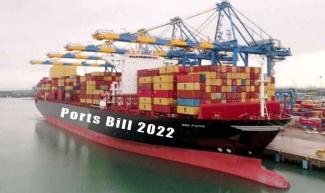