CPIML General Secretary Dipankar Bhattacharya in a letter to the Election Commission of India dated 05 September 2022, highlighted the alarming reports of coercive measures used by the election machinery for Aadhaar-EPIC linkage.

In recent days, CPIML has received several reports that the Booth Level Officers (BLOs) are informing the voters/ new applicants that Aadhaar submission for EPIC linkage/ EPIC applications is mandatory and non-compliance would lead to deletion of name from Electoral roll/new applications.  The same has been reported in various media outlets.

The reports of coercive measures deployed by the election machinery for Aadhaar linkage, despite the ECI assuring the process as voluntary, are highly alarming. In Telangana in 2015, the Aadhaar-Voter ID linkage led to large-scale deletion of names from the rolls and in process rendered thousands without voting rights.This is a clear threat to the exercise of universal adult franchise and electoral participation.Over the past several years, rampant errors and discrepancies in Aadhaar processes caused by technological failures, biometric changes etc. have resulted in loss of welfare benefits to vulnerable populations across the country. Moreover the genuine concerns around the privacy issues surrounding Aadhaar database are yet to be addressed.

Importantly, Section 9 of the Aadhaar Act notes that Aadhaar is not proof of citizenship, and hence all Aadhaar card holders are not voters. Not only this but since the Supreme Court judgment in Justice K.S. Puttaswamy (retd.) & Anr. v. Union Of India limits mandatory use of Aadhaar authentication to welfare programmes and for income tax purposes, not all voters have Aadhaar. Hence, the card-holders of Aadhaar and EPIC Voter IDs are entirely different, and no purpose appears to be served by linking the two.

CPIML demanded immediate rollback of Aadhaar-EPIC and Aadhaar Collection by the ECI as well as repeal of amendments to Form 6 and Form 6B of the Registration of Election Rules, 1960. 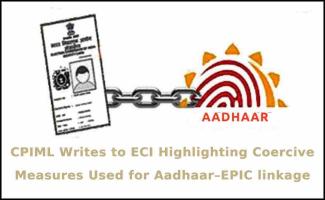