Yet another salvo has been fired by the BJP government at the Centre towards advancing the RSS’s agenda of ‘One Nation, One language’, this time with the 11th Report of the Official Language committee headed by Amit Shah. The recommendations of the committee were submitted to the President of India in September 2022. As has emerged over the last one month, the Report has given pre-eminence to Hindi over 21 other official languages of the Indian Republic. The committee’s recommendations thus brush aside a long history of language struggles and democratic aspirations of the Indian people.

The content of the Report is supposed to be confidential. However, journalist previews, clarifications put out by the members of the committee, changes in medium of instruction being introduced in technical and non technical institutions- especially medical schools of Madhya Pradesh, as well as the National Education Policy released in 2020, are clear enough indications of the special attention being accorded to Hindi in all transactions of the Union government.

In the meantime, protests have begun in non-Hindi speaking states, with Tamil Nadu and Kerala officially communicating their apprehensions. It would do well here, to note that despite numerical dominance of what is categorised as Hindi speakers, the Census of 2011 shows that for 56.37% of the Indian population, Hindi is not the first language.

The imposition can only cause further erosion of democracy. To understand this, let us first look at the recommendations that have invited opposition.

The Report recommends that in Central government funded institutions Hindi is to be the compulsory medium of instruction. This includes all Kendriya Vidyalayas, IITs and central universities, which are supposed to be open to people from across the country. Thus, putting to disadvantage students who have not studied in Hindi.

Work in Hindi speaking states, termed as Category A states, as well as Central government offices is to be done in Hindi. The extent to which it must be undertaken lies in the recommendation for writing even addresses on envelopes in Hindi, thus demanding knowledge not only from the senders but also from the carriers and recipients!

It suggests replacing compulsory English with Hindi papers in government recruitment exams, for selecting government employees, thus cutting down eligible candidates for the posts. The Report also suggests Hindi as an official language at the United Nations.

For those government officials, who do not abide by the new language rules, the Committee instructs, they must be marked out in their “annual performance report.”

If someone wants to seek justice, in the High courts of Hindi-speaking states, they can expect it only in Hindi. However, neither is justice sought only by those speaking Hindi, nor is it dispensed only by those fluent in it.

The financial push for the language is being facilitated with the recommendation that 50 per cent of the government budget for advertisements is to be allocated to Hindi. Needless to say, this implies that the other 21 official languages are to be starved of funds and will have to compete among themselves.

In violation of the federal structure, the Committee also seeks to review implementation in state government offices.

Thus, from who could access education, to who would constitute the government, how the executive will act and how justice will be dispensed are all to be filtered through one official language.

As language supremacy is being charted out by linking it with citizenship rights, a few things stand out: One, threats and punishment for those who do not follow the line of Hindi dominance. Two, denying employment to Indians who may be fluent in other Indian languages but not in Hindi. Third, declaring non Hindi official languages as unworthy of government funding, thereby making the Union government a borough of Hindi speakers. Four, homogenising official Hindi speaking states and dismissing the language diversities within those states. Five, choking educational and employment opportunities for candidates from non Hindi speaking areas. Six, internationalising only Hindi, thereby projecting India as a Hindi land, in addition to the pet BJP project of a Hindu land.

With this undermining of the democratic rights of citizens and the federal structure, the recommendations of the Report are certainly no benign move for language promotion. It is in fact an integral package of the Hindi-Hindu nation, that wants to iron out all diversities.

Language as empowerment and dissent against Hindi imposition

India witnessed a steady rise of language struggles soon after Independence. On 15 December 1952, Potti Sriramulu, a veteran freedom fighter, who had earlier sat on hunger strikes for temple entry of dalits, died after 58 days of fasting. He had been demanding the formation of a Telugu speaking state, a call given right from the 1910s. Public anger caused by his death and the subsequent movement led to the first linguistic state of Andhra Pradesh. In the years that followed, several other linguistic states emerged in line with people’s aspirations, struggles and movements.

India chose to be bilingual in English and Hindi following the language debates of the Constituent Assembly. It was the only way out to bring together India’s diverse people, without new threats of domination. The debates however also showed the rising signs of language intolerance with a section of pro-Hindi members lashing out against dissenters. In 1946, in the Constituent Assembly, RV Dhulekar declared, “People who do not know Hindi have no right to stay in India”- a line very close to the anti-national handles being used by contemporary Right wing bigots. The groups of pro-Hindi lobby had radical right wing members as well as moderate Hindi promoters. Their arguments were seen as “Hindi imperialism” by the likes of T.T. Krishnamachari who warned of the explosive situation that may arise out of this imposition. Bilinguality was a compromise formula of Munshi and Ayyangar after three years of debate, wherein Hindi and English were to continue as official languages till 1965, instead of having Hindi as a National language.

As 1965 grew closer, the anti-Hindi movement grew in Tamil Nadu, especially after the Official Language Act of 1963, which was seen as a tool for future administrations to impose Hindi on non Hindi speakers. The militant protests that raged through 1965 brought with it assurances for indefinite continuation of English alongside Hindi for connecting with the Centre and inter-state communications and for public service examinations.

The recent report and its insidious political design

The Committee of Parliament on Official Language was first set up in 1976 under Section 4 of the Official Language Act 1963. It has all along been entrusted with the agenda of promoting Hindi, but under the Modi government and the stewardship of Amit Shah, the Committee's recommendations have assumed a new urgency of centralisation and linguistic homogenization. This is part of RSS tradition and its political offsprings Jan Sangh and BJP. The calls for Hindi supremacy is posed often in a decolonisation vocabulary to cover up the imperialist Akhand Bharat project.

The politics of language supremacy runs counter to the democratic spirit and aspiration of language promotion. The Eighth Schedule of the Constitution has 22 Indian languages. Significantly another 38 languages have been demanding to be listed in this Schedule. This is a democratic aspiration, considering India has 1369 ‘rationalized’ mother tongues and 121 broad languages, as per Census 2011. Notably, many of the languages waiting and mobilising for a place in the Eighth Schedule are from states that are categorised as Hindi speaking, pointing to the diversity that is being covered up!

It should be remembered that attempts at linguistic imposition have triggered many a turmoil in independent India. The Eighth Schedule stands as the available democratic option for official languages. The connecting language of the people has to emerge in the natural course of interactions and not bulldozed in. But the recommendations of the Amit Shah led committee threaten to take the country backwards in its discourse of official languages.

Homogenisation and polarisation are the go-to tactics of Hindutva leaders in a country that is reeling under youth unemployment. In a climate of homogenisation, languages as well as social and political expressions are stifled. This agenda must be identified and exposed both within and outside Hindi speaking states. It is only in the many languages of the Indian Republic that democracy can become a power of the people and the ‘official’ must reflect it. 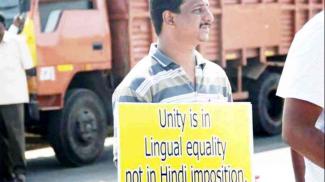