Concluding part of the article by the late Dr Gail Omvedt serialised by Liberation as part of its Freedom 75 series.

Class Meaning of the Prati Sarkar

The Satara prati sarkar was the most deeply based and long-lasting of the national revolts that took place in 1942, and its achievement was all the more remarkable because it lacked the direction of any national political force. To return to the questions this essay began with, let us conclude with some remarks about why this uprising could take place in Satara in particular, and what its result was.

Two basic reasons probably made it possible for Satara district to be the scene of a real parallel government. The first was geopolitical: the rugged hills of the Sahyadris provided refuge to guerrilla fighters as well as dacoits, and the existence of a number of princely states and their territories helped to provide political refuge and aid. The second reason was social: it was, in a way, the non-Brahman Satyashodhak movement which gave birth to the prati sarkar—by fostering education, a sense of unity among the various middle and low-castes in an anti-feudal struggle, a drive for modernization and rationality, a sense of self-confidence and revolt among a peasantry which already had a fighting tradition dating back for centuries. The Satyashodhak movement which had one of its strongest centres in the district built on unprecedented degree of solidarity and social consciousness, and by the 1930s, when the original anti-nationalism of the early non-Brahman leaders was replaced by nationalism, the way was open for this popular solidarity and consciousness to express itself in a fight against colonial injustice.

The significance of the prati sarkar was that it was a major episode in the long anti-feudal, anti-caste and anti-imperialist struggles of the southern Maharashtrian peasantry. Yet in the end, because no revolutionary Left leadership could develop to lead this movement forward in an anti-capitalist direction and really establish its base among the oppressed poor peasantry and agricultural labourers, it functioned simply as a crucial step in consolidating the power of a capitalist farmer class in southern Maharashtra.

In class terms, the prati sarkar was a movement of the bahujan samaj, which in Satara district more than elsewhere represented a broad and relatively unified peasant-artisan-labourer section. The term bahujan samaj, which became popular within the non-Brahman movement after 1900, aimed at contrasting the non-Brahmans with the shetji-bhatji oppressors, and included all middle caste sections, from Maratha-Kunbis to Telis, Nhavis, Ramoshis, Sutara, etc., down to the Mahar-Mang untouchables. (The dalits, were both a part and not a part of the non-Brahman movement and the prati sarkar itself—but it is significant that though their movement developed as a separate force under Dr. Ambedkar, it always maintained a policy of alliance with non-Brahmans). In class terms it included a large cross-section from big tenants, rich peasants and the educated middle class down to poor peasants and labourers. Thus it represented, in the context of Maharashtra, those sections who had a unity of interest in the anti-feudal struggle. And it was this bahujan samaj, along with a few representatives of Brahman and landlord-merchant families, that constituted the main force of activists in the 1942 revolt.

However, it was only a section of the bahujan samaj which came into power after independence. Today the term is no longer used in the same broad sense. A Matang agricultural labourer leader can now say, ‘The bahujan samaj is only 20% of the village—we are 80%’, which means that the term today has really come to represent only the top Maratha rich farmers—not even all Marathas. The 1942 movement took place at a time when a section of the broad peasant mass was on the way to consolidating itself as a rich peasantry and eventually to becoming capitalist farmers. Almost all the main activists of the movement (whether or not they came originally from poor peasant or low-caste families or ordinary Patil or Kunbi families) were themselves, by virtue of their education, on the way to becoming members of this class if they were not already part of it. And, again, in the absence of a revolutionary leadership, this section has successfully consolidated its position as a capitalist farmer class.

The prati sarkar itself was primarily an anti-imperialist upsurge, one of the most militant in India. As we have noted, the nyayadan mandals ‘did not touch property relations as such’. The activists opposed the village patils and talathis (record-keepers) who were the lowest level of government servants, but they did not attack merchants or landlords (Brahman or Maratha) as a class, who remained neutral with a few giving indirect support, if only because they could recognize the coming power of the nationalists. Further, ‘progressive’ ruling princes like Appa Pant of Aundh state and ‘national’ capitalists like Kirloskar maintained good relations with the movement’s leaders. (It may be added that the Kirloskars, a kind of classic national bourgeoisie whose capital accumulation was linked to agricultural improvements, throughout maintained good relations with the non-Brahman movement).

Yet at the village level, the base of the prati sarkar was not among the rich but among the middle and poor peasants, and the power of the nyayadan mandals was used to check the moneylenders’ power to exploit. More important than this, the prati sarkar was one episode in a much longer process of mass upsurge, which included the whole history of the non-Brahman revolt. It is not accidental that the 1920-21 peasant revolts took place in the very same talukas which were the centre of the prati sarkar, or that it was followed soon afterwards by the widespread burning of Brahman landlord homes after the assassination of Mahatma Gandhi in 1948. The latter was a kind of anti-feudal upsurge, and though the violence was condemned by freedom fighters, it is a fact that at least some people connected with the prati sarkar movement participated in the attacks and in the distribution of grain and other property to the poor. This driving away of Brahman landlords, and the Tenancy Acts which followed, resulted in a significant dispossession of the former feudal classes (both Brahmans and Marathas). For these reasons, the thrust of mass political and social action in Satara can be described as anti-colonial and anti-feudal, with varying expressions in varying periods.

Yet an anti-imperialist, anti-feudal struggle can lead to a new bourgeois domination, if it is not carried forward under working class leadership. The bourgeoisie can lead such struggles (in reformist, half-hearted ways) or it can take advantage of such struggles even when they are led by more militant (e.g. petty bourgeois) leadership. This is basically what happened with the prati sarkar. The destruction of British rule in India brought the Indian bourgeoisie to power at the centre, and the militancy of national struggle in the Satara-Sangli region brought a new capitalist farmer class to power (from below, not from above as in the Prussian path which is normally taken to apply to India). The struggles against Brahman landlords and the Tenancy Acts destroyed the former feudal class, but they did not in the end benefit the peasantry as a whole (though they confused the Left, which tended to see landlord abolition as the realization of ‘land to the tiller’). They simply changed the form of exploitation of the toiling majority, who are today agricultural labourers and poor peasants.

The capitalist farmer class has taken shape in the Satara-Sangli region as a result of the prati sarkar and the non-Brahman movement. It would be an exaggeration to say that there are no Brahman big farmers or feudal Marathas left in the area; in fact there are many. But the dominant section of today’s big farmer class are those who were previously ordinary ryots, tenant cultivators, junior members of path lineages, Marathas of sometimes questionable status, and a fair sprinkling of non-Marathas, i.e. the bahujan samaj of the 1930s. This bahujan samaj, or rather its rich section, moved into power with only minimal strikes against the former Maratha feudal lords (with whom it had few essential quarrels), with only a few blows against the merchants (with whom it could come to adjustment once it consolidated control of land and other instruments of power), and with some severe kicks against Brahman landlords. In short, it attacked feudalism in a reformist rather than a radical way. Nevertheless, it represented a new class moving into power. Today tenancy is minimal (and the rich farmers are as likely to lease in land as to let it out); wage labour is predominant; family heritage remains important but can easily be overridden in a child’s marriage (at least within the boundaries of the caste) for education, money and political connections.

The Satara-Sangli capitalist farmers are quite a sophisticated ruling class today. They are able to claim deep roots among the masses by claiming leadership of historical struggles, and they have a fairly wide base in caste terms and a flexibility in co-opting and allying with rising members of minority castes and dalits. Their accumulation of capital and power is based on wage labour as well as on such progressive and modern institutions as co-operative sugar factories, education societies, dairy and credit co-operatives, and banks. But the benignness of their rule should, not be over-estimated. The prohibition campaigns, people’s courts and punishment of village goondas in the prati sarkar might never have taken place. Today goondaism, rapes and other atrocities against women, corruption, alcoholism and suppression of the village poor, all continue to exist. They are, perhaps, a by-product of rich farmer rule in the same way that alcohol is a by-product of the sugar factories.

Thus the new rural and urban ruling classes have appropriated the gains of the prati sarkar. But the issue is not settled yet. For while the capitalist farmers of the region have come out of this tradition of nationalist and anti-feudal struggles, so also have the toiling masses. Democratic traditions and a history of struggle have left their mark on them too. The prati sarkar is their heritage, even more than it is the heritage of the elite. Perhaps it is not accidental that for nearly 30 years the history of the prati sarkar and its heroic anti-imperialist fight has been relatively ignored, distorted and even suppressed by the new class that has come to power. Today, as the toiling people of southern Maharashtra—workers, agricultural labourers, poor peasants, dalits, women—are again rising to fight for social justice and equality, their traditions are again being brought forward. As striking textile worker activists from the region warned Vasantdada Patil, Chief Minister of the state, in 1984 :

The calluses on Vasantdada’s hands have disappeared. Fat has grown around the bullet lodged in his chest. Now he has become the representative of the capitalist class—not only that, he himself is a sugar baron. So we want to warn Vasantdada that just as he took a gun in his hand, at a time when he fought as a part of the oppressed masses, and fired bullets against the British, so the textile workers and other toilers today have the capacity to fire guns against the capitalist class and the government and to build up a new prati sarkar. 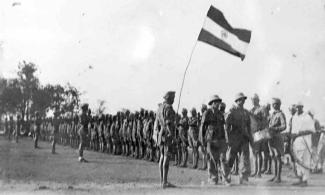