More than 27 people are dead and 29 are missing in a fire to a commercial building in Delhi's Mundka area 13 May. It is becoming clear that the fire was a result of the criminal negligence of the Labour department of the Govt of Delhi and the BJP-run MCD. This has also been corroborated by a fact finding team of trade union activists from AICCTU which visited the site and adjoining areas. The building was being used as a unit to assemble CCTVs and routers as well as for storing them. In complete violation of various labour laws and factory safety regulations there was only one entry and exit point in the whole four storey building. The whole building did not have any fire extinguishers or smoke alarms to issue a fire warning. The team from AICCTU also found that workers working there were not being paid minimum wages and were being made to work for more than 12 hours per day.

AICCTU State Secretary Surya Prakash and other leaders met the injured workers and also spoke with the families of missing workers on 14 May morning. They reported that nearly 200 workers were working in the factory which has only one path for entry to as well as exit, this is against the rules of the Factory Act 1948. Also due to the exit path being full of cardboard, plastic and other materials, the workers were unable to come out and escape from the fire. Due to scorching heat and smoke, many workers jumped from the 2nd floor and got badly injured in the process.

Many workers injured in the fire accident did not go to hospital out of fear. The injured workers whom the AICCTU team met were from Bihar, some from Siwan and some from Bhagalpur. No safety rules were being followed inside the factory. Men and women were being paid Rs 9000 and Rs 7500 per month respectively for 12 hours of work daily. This is far less than the minimum wage fixed in Delhi. None of the workers had an I-card from the company and ESI and PF are not implemented in the factory.

Two more factories in Narela also caught severe fires in two consecutive days following the tragic Mundka fire. The Delhi Deputy Chief Minister Manish Sisodia who came to the accident site had to face protests from trade unions. AICCTU maintains that the present Delhi government, the Central government, the Labour Department and other government agencies are accountable for the recurring fire tragedies in Delhi. Governments have given factory owners license to kill workers out of greed for donations that the factory owners give to the ruling political parties. On 20 May, workers from all over Delhi marched to the Chief Minister’s camp office to protest the series of factory fires at Bawana, Narela, Peeragarhi, Karol Bagh, Sultanpuri, Jhilmil, Anaj Mandi and Mundka. They said that Delhi’s workers are being killed daily in factories, sewers, construction sites, and domestic workers are killed even in the homes of the privileged – while the Delhi CM refuses to take measures to protect their lives and ensure safe living and working conditions for them. 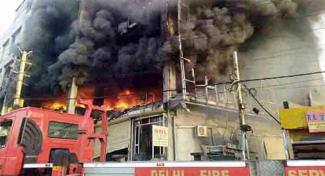