Skip to main content
International 24 May 2022
Sri Lankan Crisis: Capitalism, Authoritarianism and Nepotism Under One Roof
by Saurobijay Sarkar

The island nation of Sri Lanka is swept by a relentless wave of people’s anger. Faced with the most severe economic crisis since its independence, Sri Lanka is witnessing a complete shortage of all essential commodities. Long queues for essential items have become the everyday reality for people in Sri Lanka, so has the mass mobilization by the people against those responsible for the current crisis.

In order to silence the protest, the Sri Lankan government used repressive tactics, including declaring a state of emergency and deploying military on the streets. But all of this failed to stop the protests. On May 6, a general strike was organized by public and private sector unions, the largest since 1953. There were demonstrations outside parliament, and police tried to use water cannons and batons to attack the protesters.

The month long protest by Sri Lanka finally brought down the head of the Rajapaksa clan that had been running the government since a decade with the motto- ‘Sri Lankan government as executive committee of Rajapaksa family.’ The Prime Minister Mahinda Rajapaksa resigned on May 9, with only his younger brother Gotabaya Rajapaksa remaining in the state structure as the President. The Mahinda Rajapaksa cartel had long clinched to power after walking over the bodies of thousands of Tamils who were massacred under his orders during the final Eelam War (2006-2009).  Though Mahinda resigned and took refuge in Trincomalee Naval base, he was replaced by his friend-in-the-opposition Ranil Wickremesinghe. With the foreign reserve crisis and hyperinflation, Wickremesinghe is considered to be the man who “has experience to deal with International Monetary Fund (IMF),” as the government looks towards IMF to bail it out. Not only the government, IMF is also very keen to spread its tentacles in Sri Lanka as the Island country still has an intact public-funded education, health and social welfare system.

So, how did Sri Lanka reach at this crisis?

Since its independence in 1948, Sri Lanka had heavily invested in public welfare systems, such as public-funded education, health, and food distribution. This helped it to have much higher social and human development indicators compared to the rest of the South Asian countries. The IMF first entered Sri Lanka in the mid-1960s as the country faced a balance of payment crisis. The institution provided support as the government agreed to implement some of the structural changes including slashing subsides and government spending on welfare. The door to market-oriented and liberalization policies were opened in 1977 under the Presidentship of JR Jayawardene. The successive governments further liberalized and privatized the economy, but the public education and health system to some extent remained intact.

After the Eelam War in 2009, Mahinda Rajapaksa government approached IMF for a $2.6 billion loan. And as with every bailout, IMF wanted a cut in public spending by the government (a cut in fiscal deficit to 5 per cent of the GDP by 2011).

Later, Ranil Wickremesinghe pushed for neoliberal economic model and grand plans like the Western Region Megapolis, megacity and economic hub. Under the Rajapaksa regime over the last decade, a neoliberal economic path was steadily consolidated. The mega projects, which were being planned were heavily dependent on credits and loans from various countries and Institutions, including China, India, Japan and Asian Development Bank.

The final shock came in the form of the Easter Day bombings of 2019 and the government’s decision to cut taxes. In November 2019, the government reduced VAT from 15 per cent to 8 per cent. Direct taxes were also reduced. Though this populist policy was supported by many, it failed to create any mitigating mechanism to the decrease in revenue, like increasing taxes on the super rich. The above developments, combined with the COVID 19 pandemic, which crushed the country’s tourism sector, led to plummeting of country’s foreign currency reserve and revenue. As the crisis deepened and unemployment rate reached 5.2 %, many Sri Lankans attempted to venture into agriculture. But the lack of state support and a sudden ban on importing of chemical fertilizers in 2021 broke the back of the agricultural sector in the country. The state-sponsored ambitious project of establishing 100 percent organic farming failed severely, leaving millions of farmers with failed crops. The Sri Lanka government had to pay $200 million in compensation to the farmers under the botched organic farming scheme. Agriculture production was severely affected, endangering the country’s food security. For example, the productivity of paddy in the Maha season (one of the two crop seasons; the other is Yala) of 2021-22 was lower by 40-45 per cent compared with the previous Maha season of 2020-21.

In March 2022 itself, the entire world especially Asia came to know that Sri Lanka is in utter economic crisis. The crisis took a concrete shape in April, when government announced that Sri Lanka would be defaulting on all of its external debt - $51 billion - after running out of foreign exchange for imports, which further had a disastrous effect on common people especially the poor, with acute shortage in food, electricity and all necessary items for daily livelihood, some of which are imported.

Economic mismanagement and wrong policies of successive governments, the world economic condition, the tight coupling with loan systems, which although not a very big factor for Sri Lanka, all contributed towards this crisis. Massive inequality is taking shape. The crisis is putting more and more burden on poor, where some privileged elite and corrupt industrialists and the puppet politicians are still enjoying lives of luxury. The military budget also continued to increase post-war amid Rajapaksa’s policies of silencing any form of dissent. The unnecessary burden of the the Rajapaksa regime’s ambitious infrastructure projects aimed to project Sri Lanka as ‘London ' or ‘New York’ landed Sri Lanka even deeper in the debt trap.

The IMF and Sri Lanka are in talks to finalize a bailout. And any IMF loan comes with conditions called “structural adjustment,” which had been the primary mechanism to push a country towards complete neoliberalism and privatization. With the severity of the current crisis, observers are warning that IMF would move towards dismantling Sir Lanka’s public welfare systems. This would lead to ending of universal and free education, health and food security, which will be replaced by cash-transfers.

The Sri Lankan situation reminds us of Argentina, which defaulted in 2001-2002 and later Greece as well. To overcome its crisis and hyperinflation, Argentina was forced into a “convertibility regime” – a legal commitment was introduced to exchange the Argentina peso for US dollars at 1:1. This was done to reduce hyperinflation and stimulate economic growth. Initially it was yielding a minor improvement, but the overvalued Peso and the massive borrowing needs led to negative consequences and increasing costs. In December of 2001, after two years of recession and increasingly desperate attempts to forestall a debt crisis through IMF financial support, fiscal adjustment and debt management operations, Argentina defaulted on its external debt.   The Rajapaksa brothers came to power on the strength of their image of being “strong leaders” who had “conquered” the rebellious Tamils. The continued humiliation of the Tamils was then compounded by Islamophobic politics (bans on halal meat and hijabs, that the RSS and BJP are now echoing in India, as well as patronage of hatemongering Buddhist monks) and violence against both the Muslim and Christian minority populations. For Indians, what is most significant about the current uprising is the united participation of Sri Lankan citizens across ethnic and religious divides. The people of Sri Lanka have been able to see the disaster that the Rajapaksa regime has wrought on them under cover of hate-based politics.

In India, Sangh-backed hate-mongers keep threatening the genocide of Muslim minorities; and Muslims and Christians too face daily state-sponsored violence at the hands of Hindu-supremacists. Sri Lanka actually witnessed a civil war that ended with the genocide of the Tamils. Since then, Sri Lankan rulers have not only evaded all accountability for their crimes against humanity, they have tried to capitalise on that genocide to hold on to political power and popularity. And they also continued to fuel new waves of hate against other minorities – Sri Lankan Muslims and Christians, also pitting these minority communities against each other. The rhetoric of war against Tamil “separatism”, and of Sinhala-supremacist nationalism is now coming undone, revealing that the “defeat” of the oppressed inevitably brought in its wake the defeat of all. This is the lesson that Indians must take from the people of Sri Lanka. 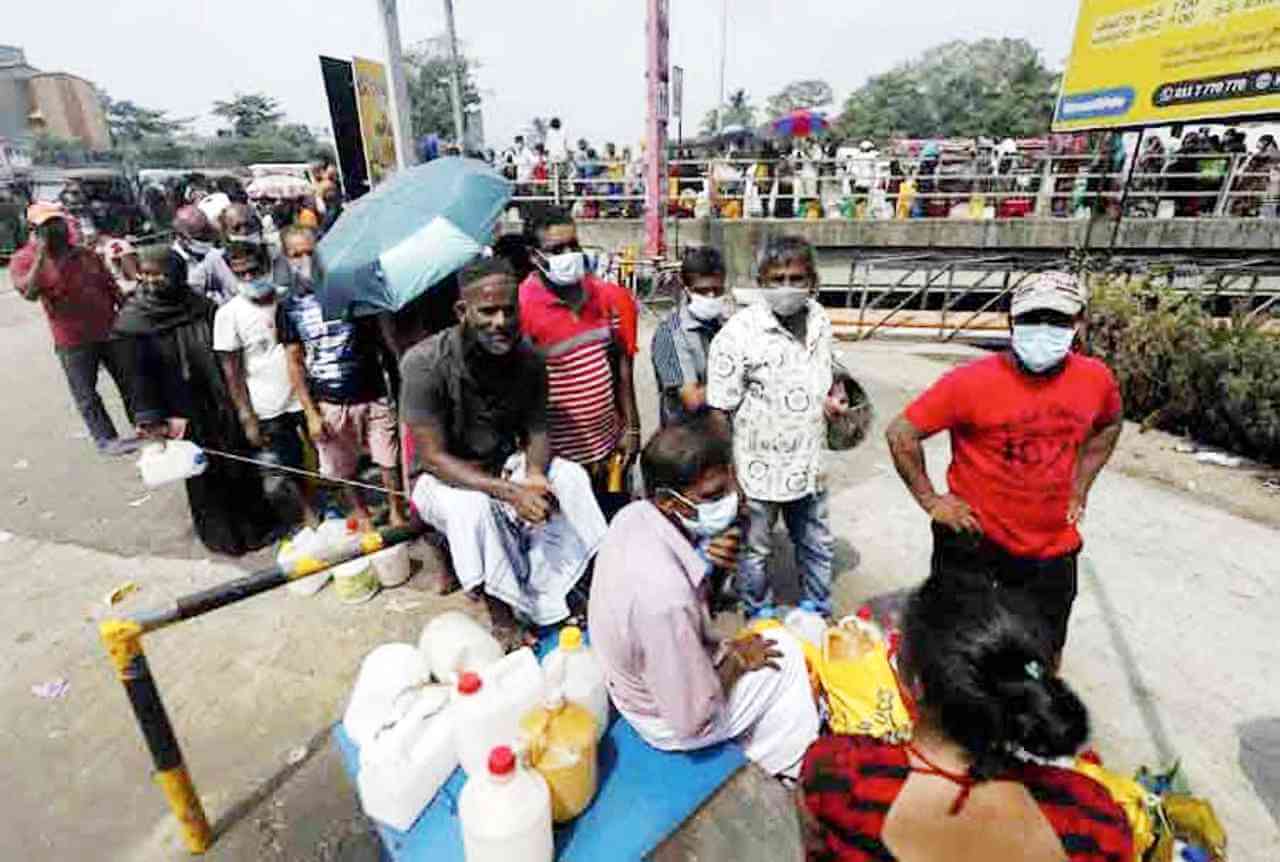 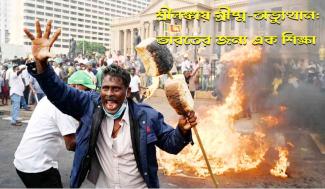