Delhi HC delivered a split verdict on a case challenging the marital rape exception in India’s rape law. Justice Rajiv Shakdher, who headed the division bench hearing the case, said that the right to withdraw consent forms the core of the woman's right to life and liberty; and the marital rape exception (MRE) violates this right. The right to withdraw consent at any given point in time forms the core of the woman's right to life and liberty which encompasses her right to protect her physical and mental being. Non-consensual sex destroys this core by violating what is dear to her, which is, her dignity, bodily integrity, autonomy and agency, and the choice to procreate or even not to procreate, he said. The fact that the rapist is the husband of the victim does not make the act of sexual assault any less injurious, degrading, or dehumanizing and emphasised that marital rape leaves not only physical scars but also much deeper scars on the psyche of the victim. He also observed that far from the existing laws on violence against women being misused, they are vastly underused.

He noted that the data of the National Family Health Survey, which was carried out under the aegis of the central government for 2015- 2016, had found that 80% of married women reported non-consensual sex forced on them by their husband. He also noted that NFHS data showed that 9.9 out of 10 cases of sexual assault in India go unreported.

Justice Hari Shankar however delivered a verdict upholding the marital rape exception. His opinion ignored legal precedent on the understanding of consent. He stated that “If the wife refuses, and the husband, nonetheless, has sex with her, howsoever one may disapprove the act, it cannot be equated with the act of ravishing by a stranger. Nor can the impact on the wife, in such a situation, be equated with the impact of a woman who is raped by a stranger.” This notion that stranger rape is more damaging that rape at the hands of an intimate partner is a widespread fallacy and is inexcusable coming from a judge. 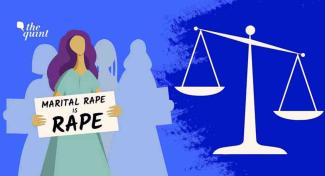