The Sangh brigade is planning a repeat of the Babri Masjid demolition by raking up a dispute over the Gyanvapi mosque. This is a clear violation of the Places of Worship Act, 1991 which protects the status of every place of religious worship as on 15 August, 1947.

This also violates the spirit of the Supreme Court's Ayodhya verdict which even while considering the demolition as an egregious criminal act chose to uphold the Ram Mandir claim in the title suit with the hope that this will put an end to all other controversial claims. The verdict had implied that future litigants could not use the Ayodhya verdict as a precedent to convert Muslim religious sites into Hindu ones, stressing that the Ayodhya resolution was an exception.

The Sangh brigade is however working on the oft repeated aggressive slogan 'Ayodhya sirf ek jhanki hai, Kashi Mathura baki hai' (Ayodhya is only a glimpse of what will happen in Kashi and Mathura).

Unfortunately the Supreme Court’s initial response does not inspire confidence that it will nip this conspiracy in the bud. The Supreme Court bench (comprising two of the judges who were part of the Ayodhya verdict) have ordered the Varanasi DM to secure the “shivling” site while allowing namaz to continue at the Gyanvapi mosque. This order raises concerns, since there is as yet no evidence of any shivling at the mosque. The Sangh alleges without evidence that an ancient shivling has been found in the pond which is used for wazoo purification rituals before the namaz prayers.

In passing the Ayodhya verdict, the Supreme Court had admitted that the Muslims were indeed wronged by the demolition, and had even admitted that there was no evidence of a historical Ram Temple that had been demolished to build the Babri mosque, but had still settled the land dispute in favour of the Ram Janmabhoomi Trust. At the time, many had raised the apprehension that such an order allowing Hindu supremacists to profit from an act of fascist violence would embolden them to carry out their threats to demolish mosques at Kashi (Varanasi) and Mathura, not to mention the Taj Mahal and other historical Muslim structures. Many others, eager to trust the Supreme Court’s wisdom, had hoped that the verdict would bring closure to a painful and divisive chapter in Indian political and social life, and allow India to move on. But does the latest Supreme Court in the Gyanvapi case once again open up a new “dispute” manufactured by the Sangh? If the highest court appears to legitimise Hindu supremacist claims to another ancient Muslim mosque, will it not open up exactly the same dangerous and destructive path that the same court’s Ayodhya verdict was supposed to close forever?

This matter must not be left to courts alone. All peace-loving Indians must unitedly assert against the BJP's Gyanvapi expedition, and declare ‘never again’ to fresh hate and violence in the name of demolishing mosques and mausoleums that are our collective Indian heritage.

Prices of essential commodities are soaring sky-high, the economy is in a terrible mess and the overwhelming majority of Indians are worried about their jobs, livelihood, housing and other basic necessities of life. The Modi government offers  no solution to this crisis, no relief to the people, all it does is to seek opportunity in crisis and inflict more injuries on the people.

Diversity and harmony are the two legs on which India can stand united and firm to weather any storm. Attack on these foundations is not just a blow to the religious right and heritage of Muslim community, it is an outright assault on the shared historical legacy and the very spirit of India. 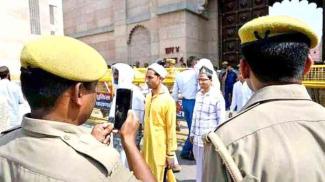