If the last phase of Yogi 1.0 government is notorious for the infamous Hathras rape case in which the deceased rape victim's body was clandestinely disposed off by the UP Police in the darkness of the night, the Yogi 2.0 regime has added more blood on its hands.

On May 1st, when the workers of the world unite with the call to end exploitation, the police of Uttar Pradesh ganged up and  attacked 2 young sisters, Nisha Yadav (23) and Gunja Yadav (20) in Chandauli district of UP, when they were alone in their home. After the police fled from the scene of crime, the injured younger sister found the dead body of her elder sister hanging from a hook in a neighbouring room, with her feet touching the floor. The pretext of the police raid was to get the whereabouts of Kanhaiya Yadav, the father of the girls, who had been expelled from the district by the Chandauli district administration after invoking Goonda Act against him a few months ago. Kanhaiya had refused to pay Rupees 10000 per month as bribe to the local police station for running his business of selling sand for which he had a license and GST number.

As the news of this incident become public, Sudhakar Yadav,  state secretary of CPI(ML) along with district secretary Anil Paswan and AIPWA state secretary Kusum Verma visited the bereaved family and assured their support in their fight for justice. The action of suspension of 6 policemen by the district administration under section 304 (culpable homicide not amounting to murder) was termed inadequate by the family members and they demanded that the accused policemen should instead be arrested and charged under Section 302 (attempt to murder).

The first political initiative on this issue by any organization was independently taken by CPI(ML) on 6th May in form of a sit-in at the district HQ. This initiative was welcomed by many organizations working in the district and instilled in them a sense of confidence to challenge the state government. A state-wide call was given by CPI(ML), AIARLA and AIPWA on 10th May demanding that - (i) the suspended policemen should be arrested and charged under Section 302 of IPC (ii) the whole incident should be probed by a sitting judge of high court instead of CB-CID, as  ordered by UP government (iii) employment benefit and compensation to the family of the deceased. This was followed by a meeting by some organizations on 12th May in which it was decided to form a front called 'Justice for Nisha Yadav' and carry out future campaigns under this banner.

CPI(ML)'s initiative at the ground level played a catalytic role in galvanizing various social- political forces in the district. The electoral victory of BJP in the recently concluded state elections and its 'bulldozer' brand of politics had created a sense of fear, frustration, anxiety and resentment in a large section of the population. When a political force was seen fighting against BJP's police Raj, it attracted  diverse forces such a Samajwadi Party, a faction of BKU, a few Dalit organizations and also the Bheem Army and the Azad Samaj Party. The joint meeting of many organizations held on 12th May endorsed the decision of CPI(ML) that a 50 hour fast should be launched at the district headquarter beginning from 14th May. It was to be led by Com. Sudhakar Yadav. Along with him, Mani Dev Chaturvedi (spokesperson of BKU),  AIARLA leader Vijay Ram and 3 BKU leaders also decided to observe a fast.

Their fast which continued for two days in scorching heat, ended with a militant march which was attended by leaders of Samajwadi Party and Azad Samaj Party as well as the father of Nisha Yadav. Addressing a mass-meeting prior to the march, Com. Sudhaker accused the Yogi government of converting UP into a police state. He said that revolutionary forces will not be cowed down by such actions and will mobilize the masses against the BJP government.

Sensing the enthusiastic response to the ongoing agitation as well as to step-up the pressure on the government, it was decided to extend the fast indefinitely, and to continue it with different activists and mass organizations participating in it. On 18th May, the Chandauli district secretary of AIPWA, Com. Pramila Gond sat on fast. In a show of solidarity and resistance, leading AIPWA leaders from neighbouring districts also reached the site and joined the fast.  Addressing a gathering on the site of fast, Com. Kusum Verma, the state secretary of AIPWA said that instead of protecting the daughter (Beti Bachao), the double-engine government of Modi-Yogi  was protecting its police (Police Bachao). She added that the UP police is wrecking havoc on women by torturing them on the pretext of curbing crime of the men folk of their families. To express solidarity with the ongoing movement, the gathering was also addressed by Ramkishun Yadav, ex- MP from Chandauli as well as a present MLA of Samajwadi Party. The district secretary of Suheldev Bhartiya Samaj Party (SBSP) also lent support to the movement.

A general consensus is emerging that this movement should be made more broad-based and sustained till the arrest of the policemen. Marches in the local markets are being planned with the slogan-"Justice for Nisha Yadav". Pamphlets are being printed for wider circulation of the issue.

Even as the struggle for justice for Nisha continues, another incident came to light where a woman Roshni (50) w/o Akbar Ali died when she was shot in the neck during police action on the night of 14-15 May in Islamnagar Tola in Kodra village, Siddharthnagar District, Uttar Pradesh. A 4-member CPIML enquiry team visited the village on 17 May 2022 to find out the facts. The team met with the victim's family, and were told by eyewitnesses that Roshni was shot by the police who were taking away her son with them. The person Jitendra Yadav whom the police are naming as the accused is a police informer now being made a scapegoat by the police. The story of cow slaughter being touted by the police is false and a figment of imagination. A local youth Rajkumar told the team that there has never been any talk of cow slaughter in the village. Islamnagar Tola is a predominantly Muslim locality and populated by the Banjara community. They are mostly workers and some earn their living in Mumbai.

The UP police under Yogi Adityanath in his second term is all set to outdo their reputation for murderousness that they acquired in his first term. 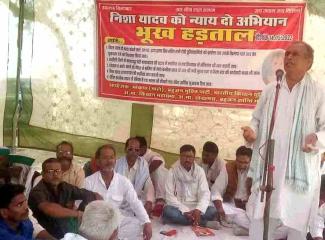