The recent presidential elections in France witnessing the+7 re-election of Emmanuel Macron of La République En Marche (Republic Forward) defeating far-right Marine Le Pen of the National Rally. Macron received 58.6% of the votes while Le Pen grabbed 41.4% votes during the second round of the elections held on April 24.

Liberation talked to Nicolas Jaoul, a researcher based in France regarding the presidential elections and its implications.

In recent elections, Emmanuel Macron has managed to defeat Le Pen. How do you read the results?

Nicolas Jaoul: The defeat of Le Pen is actually misleading. The far right has achieved its best historical results ever since the foundation of the National Front in 1972 by Jean Marie Le Pen, father of Marine Le Pen. In 2002, Jean Le Pen,  for the first time managed to come second at the first round of presidential elections, with 17.8% votes. A huge antifascist demonstration took place before the second round, testifying of French people's determination to oppose the far right. When his daughter Marine Le Pen took over the leadership of the party in 2011, she adopted a populist strategy to increase National Front’s acceptability.  This attempt paid off. In 2018, she changed the party's name to a less aggressive, " “Rassemblement National" (National Rally) and sought to dissociate from her father's far right, Petainist legacy [Philippe Pétain was the Chief of State of Vichy France from 1940 to 1944, who collaborated with Nazi regime].

Since 2017, she reached the second round of the presidential elections (the major election of French electoral system) and constantly progressed. In 2017, she obtained 34% of votes and in 2022, she reached 41.5 %, reflecting a massive jump in her support. She has managed to become the most popular candidate among the popular classes, especially those facing economic hardships. An opinion poll regarding the first round of 2022 elections showed that 31% of the latter voted for her, as against 24 % for the left candidate, Melenchon, and 19% for Macron.

What would the rise of Le Pen’s National Rally in recent elections mean for the future of France?

The biggest surprise from the current presidential elections was also that in the Antilles island in the Caribbean, where the population is mostly black, Le Pen managed to secure first position with 60 % in Martinique and 70% in Guadeloupe Islands respectively. This shows that to a large extent with still holding to right wing policies, she managed to make in road by dissociating herself from her father's openly racist credentials. She has mostly managed to benefit from the popular classes' resentment against Macron's neoliberal and arrogant personality.

However, as per the opinion surveys, in the legislative elections that will be held in June this year, Le Pen’s National Rally is credited with less voter support, while Melenchon of La France Insoumise (France Unbowed) emerges as the strongest opponent to Macron. Melenchon has emerged as the undeniable leader of the left section, thanks to his prepoll alliance with the socialist and communist parties and the Green party.

It remains to be seen if the left alliance, Nouvelle Union Populaire écologique et sociale (the New People's Ecologic and Social Union or the NUPES) will be able to convert the encouraging dynamics (it seems to have a slight edge over Macron's party right now) into a sufficient number of seats to be able to form the government. This would create a situation of cohabitation, with Macron as the President and Melenchon as Prime Minister.

So for the moment we can only continue to hope and try to convert the optimism reflected in the recent voter surveys for NUPES for upcoming legislative elections into a popular wave of support for the left. Macron however still manages to retain an advantage from the division of his opponents between the Left and the far right.

"A Le Pen victory would have been a disaster. Though she was defeated, the anti-fascist and anti-racist forces have no reason to feel relieved because the xenophobic ideas of the extreme right have spread, including the ideas of Éric Zemmour (an Ultra far-right French politician with anti-immigrant, sexist, racist and Islamophobic ideology.)"
- Catherine Samary, author and political activist from France 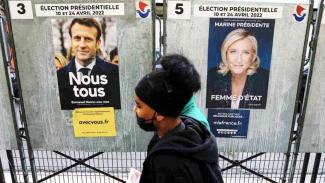