[CPIML MLA from Bagodar, Comrade Vinod Singh, recounts how he had flagged the corruption of bureaucrat Pooja Singhal way back in 2011 – and had pursued the issue since. Now that Pooja Singhal’s corruption has emerged as an issue that the Government can no longer avoid, the people of the state must ask current and previous governments why for over a decade the repeated warnings by MLAs like Vinod Singh from CPIML and Arup Chatterjee from MCC were ignored to allow a corrupt bureaucrat to flourish.]

It was, perhaps, in 2011. I had gone to Chatra for the Vidhan Sabha committee site inspection. Also with me in the committee were Arup Chatterjee and Janardan Paswan. During the district review I saw that 2 NGOs had been paid crores of rupees as advance payment in the MNREGA scheme by Pooja Singhal, whereas this picture was not visible in the work report. Something appeared fishy and incomplete. I spoke to the local MLA Janardan Ji about this. He also expressed doubts. The 3 of us then decided to visit some villages for inspection. Some schemes were not there at all on the ground; where we found some half-dug wells, the workers had not been paid wages. One farmer showed us his head and told us angry workers had cracked his head because they had not been paid wages, whereas funds for all those schemes had been withdrawn. We came back and submitted a brief report in the Vidhan Sabha and demanded a high level enquiry. Of course, the report was consigned to the shelf, but I raised the matter in the Assembly based on the facts of our investigation and finally the then Commissioner Hazaribagh Nitin Madan Kulkarni was appointed to enquire into the issue. In his probe he held Pooja Singhal fully responsible. Meanwhile reports of a MNREGA scam came from Khunti, from the time when Pooja Singhal was the Deputy Commissioner there. As a result of our raising the question an FIR was registered against Ram Vinod Sinha but no action was taken against the senior officer.

By that time complaints of purchase irregularities had also come in from Palamu. Once again I raised the question why no action had been taken on the Hazaribagh Commissioner's report. The government replied that the Personnel Department was reviewing the matter. I remember the 2 final Assembly sessions of 2010-2014 as clearly as a screenshot. Whenever our question on this scam was listed, a furore was created on some excuse or the other before our question could be taken up and the Assembly was adjourned. In the previous Assembly during CM Raghuvar Das' term also Arup Chatterjee (MLA from MCC) tried to raise the matter but the government kept avoiding the issue and finally now after this raid it is clear that governments have always worked to protect corrupt officials and taken action only as per their needs and convenience. The present government should even now become alert and take action on pending cases. 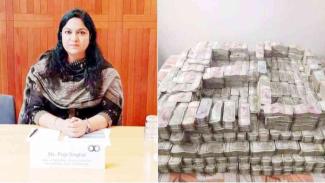