On 26 April 2022 CPIML State Committee member Atul Sati, former Mahila Samakhya state director Geeta Gairola, senior journalist Trilochan Bhatt and Seema Sati and I went to Lohari. On one side are some ruined houses; houses on which the whitewashing still appears fresh, but everything else is in ruins. On the other side empty-eyed men and women sit hopeless in the courtyard of the Middle School. This is the scene that greets us in Lohari village. Lohari village was submerged for the Uttarakhand Hydro-electric Corporation's Vyasi Hydel Project. This village is at a distance of about 80 km from Uttarakhand's temporary capital Dehradun.

The Vyasi Hydel Project is a project with a capacity of 120 megawatts (MW). Adjoining this, another project the Lakhwad Hydel Project has been recently constructed. Both these projects are on the River Yamuna; therefore they are commonly jointly referred to as the Lakhwad-Vyasi Hydel Project. The concept of the project dates back to the 1960s. According to the villagers of Lohari, the first survey for the Vyasi Project was done in 1967. They tell us that the proposal for the Vyasi Project at that time was for three turbines of 40 MW. In other words, between 1967 and 2022 the proposal changed from 3 turbines of 40 MW to the construction of 2 turbines of 60 MW each. Perhaps if 3 turbines of 40  MW had been constructed instead, there would have been no need to submerge Lohari village.

The history of the struggles of the people of Lohari with the project is as old as the history of the project itself. The villagers tell us that compensation was for the first time given in 1972 by the government. The elders objected at that time, asking for land in return for land. From 1972 till date the villagers' demand has been land in return for land.

The present phase of construction of the Vyasi Hydel project started in 2014. Then also the villagers of Lohari demanded that as their land was being taken away from them yhey should be rehabilitated in an equal portion of land. According to the villagers, the Congress government in its last Cabinet meeting in 2016 passed a resolution to rehabilitate the villagers of Lohari on 11 hectares in the government silk farm at Jeevangarh near Vikasnagar. It should be noted that out of the total 17 hectares of land in Lohari village, 08 hectares have been acquired for the Vyasi project and the remaining 09 hectares will be used for the Lakhwad project.

In 2017, the BJP government came to power in Uttarakhand. In the very first Cabinet meeting the Trivendra Singh Rawat government stayed the previous government's decision to rehabilitate the villagers of Lohari on 11 hectares of government silk farm land.

The villagers tell us that when the construction work for the project started gaining speed, they started dharna protests in 2018 for the rehabilitation of the village.  According to the villagers, Vikasnagar BJP MLA Munna Singh Chauhan asked them not to protest, assuring them that all their demands would be met. He came to Lohari along with officials of the administration and hydel corporation and told them not to agitate, as he would do their work within 15 days. The villagers kept in constant contact with the MLA who kept assuring them that he was attending to their work. Once he even assured them that it has been decided to allot the government silk farm land to the Lohari villagers. This phase of assurances continued for about 3 years.

Meanwhile in March 2021 the BJP changed its own government's Chief Minister in Uttarakhand. Tirath Singh Rawat was made Chief Minister in place of Trivendra Singh Rawat. After becoming CM when Tirath Singh came to Vikasnagar, MLA Munna Singh Chauhan raised the issue to Lohari evacuation from the stage. Stage, garlanding, applause, everything happened...the only thing that did not happen was evacuation and rehabilitation.

Finally, the people of Lohari came to the end of their patience with the rattle-toy of assurances, and they again announced a dharna from 05 June 2021 which continued till October 2021. Early in the morning of 03 October 2021, the protesters were driven away from the dharna spot by heavy deployment of police and PAC and 17 people were sent to jail. The peaceful protesters were sent to Saddowala Jail in Dehradun under sections like 'disturbing the peace'. The villagers had to go to the High Court in Nainital for getting bail in a case where the charges were so minor.

The villagers of Lohari were cheated not only politically but also in the matter of compensation. The villagers who worked for a private company in the hydel project construction work had their compensation money cut in the name of employment. Say, a person worked in a company doing hydel project construction work, if their compensation money amounted to Rs 5 lakhs, they would be given Rs 1 lakh and Rs 4 lakhs would be cut saying that they have been given employment.  Nobody is willing to tell the villagers from which fund came the money that has been forcibly paid into their account in the name of compensation. One woman says that she was told Rs 10 lakhs have been paid to her as compensation, but only Rs 3 lakhs have come into her account.

It seems as if this is legal tokenism, rather than compensation, which is why at 5.30 pm on 05 April, an amount was put into their accounts through RTGS, and at 6 pm a notice was issued for them to vacate the village within 48 hours. According to the villagers they were issued 48 hours' notice but a JCB was ready on stand-by after 24 hours in order to put fear into them. In a hurry they vacated their homes. They broke their homes on the verge of submersion with their own hands to salvage whatever construction material was salvageable, and then their homes were drowned in the waters rising up to produce electricity in the hydel project. After some days when the waters subsided, the ruined houses have again appeared on the surface. The sight of the drowned homes once again come to surface is as if the knife is being twisted afresh in the wounds of the villagers of Lohari.

News reports are appearing that the 2nd turbine of the Vyasi project is not able to start due to insufficient water. One report said that operating even one turbine is very difficult. If so, then it seems as if the purpose of the whole exercise to evict the villagers of Lohari was to capture the land and not to start the project. The villagers say they were not even allowed to harvest standing crops of wheat, rajma and garlic. One woman said that while the fields were flourishing they often did not have to purchase even onions and garlic from the market. One villager says half his fields were acquired; the other half remains, but what can he do with the remaining half now?

The villagers' demand is very simple, that they should be given land in lieu of land. The Uttarakhand government chose to jail the villagers and submerge them instead of listening to this small and just demand. The minutes of a meeting on this project show that Uttarakhand Hydel Corporations opposed the demand for land in lieu of land saying that if this demand is acceded to, then people in other places will also start making similar demands. Just think, what kind of an objection is this? If people make similar demands, where is the crime in that? But the way the Uttarakhand government has treated the Lohari villagers shows that they took the objections of the Hydel Corp. officials seriously. They forcibly submerged the village, but did not give land in lieu of land. 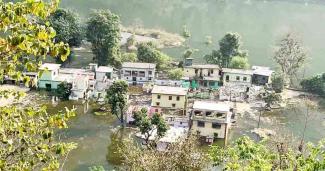