CPIML dips its flag to pay its respects to veteran farmers' movement leader and founder of the Bhartiya Kisan Union, Ghulam Muhammad Jaula, who passed away on 16 May 2022.

A close associate of Mahendra Singh Tikait, Ghulam Muhammad Jaula stood firm during the Muzaffarnagar communal violence orchestrated by the Sangh brigade in 2013 as a pillar of Hindu-Muslim unity and champion of sugarcane growers. CPIML had contributed to his sterling relief work for poor Muslims affected by the communal violence in 2014 in Muzaffarnagar, and the All India Kisan Mahasabha had worked closely with him for years.

During the historic farmers' movement against the corporate takeover of agriculture, he played a leading role in overcoming the BJP's politics of communal polarisation and rebuilding the Hindu Muslim unity in the farming community across religious divides in Western UP. The true tribute to him would be to honour the legacy of Hindu-Muslim unity and the rights of farmers and workers and India's people. Salute to Ghulam Muhammad Jaula! 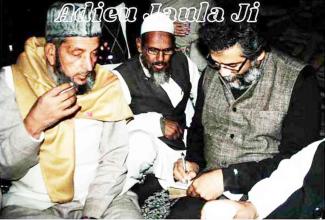