On May Day 2022 (May 1) CPIML launched a month-long all-India campaign to inspire people to resist Bulldozer Raj – the BJP’s vicious anti-poor and anti-Muslim campaign to target and raze down homes and shops of Muslims and the working poor by branding them 'Bangladeshis' and 'rioters'. A brief report of highlights of the campaign follows.

Bihar: Bulldozer Raj, Eviction Of Poor Will Not Be Tolerated

Hundreds protested under the banner of CPIML on 13 May 2022 in front of DM Patna against the diktat to evict the poor families long-settled in the Son canal chart in Shabarinagar (Khagaul). After the protest a delegation led by Phulwari MLA Gopal Ravidas met DM Patna and demanded an immediate stay on the order to evict the poor and dalits.

Gopal Ravidas said that the these poor dalit families have been settled for a long time in the Son canal char (sandbank), some living in the lower part and some in the upper. Builders and dominant caste people have their eye on this land. They filed a PIL in the High Court citing obstruction of the water source and misled the High Court. Under direction from the High Court the Sub-Divisional Officer issued a notice to vacate the land.

Gopal Ravidas pointed out that the Son flyover has been constructed but that does not pose any problems; only the poor being settled there is being seen as a problem. This is nothing but a conspiracy by builders and the land mafia to grab the land. During the talks the DM acknowledged that a survey has been conducted and the administration has no problem with the poor being settled there. The DM has issued instructions to the CO that any kind of action against the poor is wrong.

In 2001 when this area was under Gram Panchayat 53 people were given occupancy papers but afterwards the area went to the City Council and the matter still hangs in limbo. The CPIML MLA said that bandobasti (arrangements) for all the poor should be made as per the earlier basis.

The protest march was addressed by Shashi Yadav, Anita Sinha, Pannalal, Rakhi Mehta and AISA-RYA activists. The speakers said that Nitish Kumar must answer why he is silent when bulldozers are set to wreak havoc in Bihar. The orders of the court are that no poor should be evicted without prior alternate arrangements; why then are the poor being thus attacked? We demand that a new housing law be passed for the urban poor.

Statewide Protests in UP

Earlier, statewide protests were also organized on 10 May under the CPIML-AIPWA-AIARLA banners against the Yogi government's Bulldozer Raj and growing violence against women in Chandauli,

Lalitpur, Ferozepur as well as other places in Uttar Pradesh.

In Lucknow a march was organized from Parivartan Chowk to the Collectorate which was stopped mid-way by the police-administration. A meeting was held on the road and a 10-point memorandum addressed to the Governor was submitted to the Kesarbagh Thana Head. The meeting was addressed by leaders including Ramesh Singh Sengar, Kamla Gautam, journalist Sarojini Bisht, Kumari Anjali, Kaleem Khan, Madhusudan Magan and others.

The protest in Robertsganj Tahsil, Sonbhadra was attended by State Secretary Sudhakar Yadav. Addressing the dharna Comrade Sudhakar said that women are not at all safe even in police custody. The Yogi regime is creating communal hatred and also unleashing bulldozers against minorities and dalits. The CPIML will under any circumstance carry forward the fight to protect minorities, dalits and the poor.

On 9 May, Shaheen Bagh once again shone bright as its residents poured out on the streets to send the MCD bulldozers back empty handed.

On 11 May, hundreds of people from across the Delhi gathered at the Delhi’s Kashmiri Gate on May 11th to take part in the protest march to Lieutenant Governor’s House calling for an end to communal and fascist Bulldozer politics run by BJP ruled MCDs. The protest was jointly called by CPIML, CPIM, CPI and various students and civil society groups, including organisations representing people whose houses had been razed during the previous demolition drives.

Sucheta De, Central Committee member of CPIML and leader of AICCTU warned that working class and toiling masses of Delhi will not allow the communal venom the BJP is trying to spread in Delhi in the name of anti-eviction drives. “Like Jahangirpuri and Shaheen Bagh, the people will give a befitting response against such politics of hate.” said Sucheta De.

Ravi Rai, CPIML Delhi State Secretary said that “like the Babri Masjid demolition, the demolition drive is a staging of fascist terror by BJP against the minority Muslim community – this time on a more sustainable, local scale.”

Since the Jahangirpuri violence in April this year, the BJP ruled MCDs in Delhi have embarked on aggressive campaign threatening Muslim majority areas with bulldozers and demolitions under the veil of anti-encroachment drive. In Jahangirpuri, the demolition drive went on despite the stay order by Supreme Court and it was only stopped after the intervention by left parties’ leaders and cadres. On May 9th, the Bulldozers were brought in at the Shaheen Bagh. Clearly, the attempt was to intimidate the residents of Shaheen Bagh the site of historic anti-Citizenship Amendment Law protests. Once again, the residents of Shaheen Bagh resisted the fascist onslaught and the bulldozers were forced to go back.

Members of Hawkers and Vendors association and Dhobighat Jhuggi Adhikar Manch also condemned the targeted attack on the Muslim community in the name of anti-encroachment drive. Feminist groups Saheli, AIDMAM, NFIW, AIPWA, AIDWA, AIMSS, and many others stressed the fact that women vendors bore the brunt of the demolitions at Jahangirpuri. 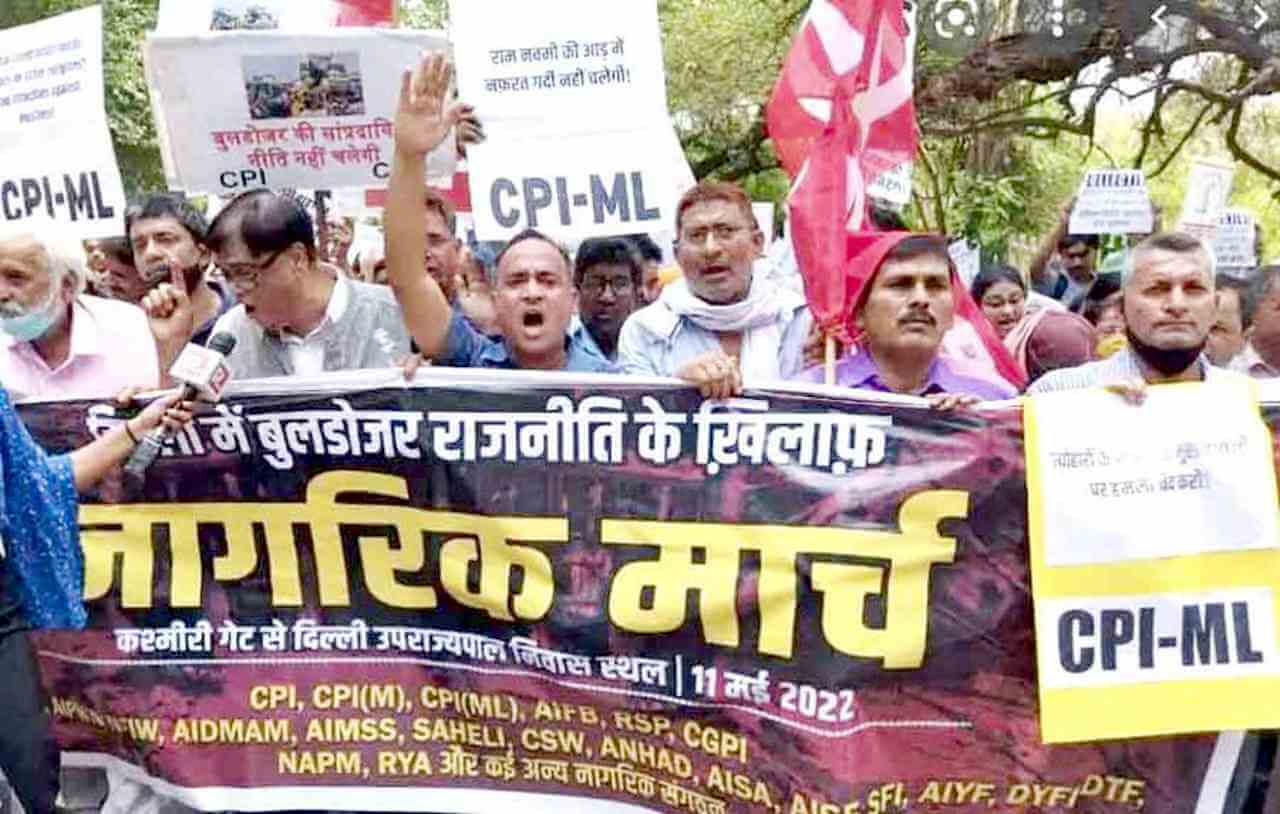