Former US President George Bush, speaking at an event at the George W Bush Presidential Center that examined the future of American elections, made a Freudian slip of the tongue. He said, “[The] decision of one man to launch a wholly unjustified and brutal invasion of Iraq… I mean, of Ukraine.” What followed this gaffe, however, was even more significant.

Realising his mistake, he said under his breath, “Iraq, too”, adding ““Anyway, 75” in an attempt to blame the embarrassing moment on his age.  What does that “Iraq, too” admission mean? Two decades ago, the whole world was out on the streets in protests declaring that Saddam Hussein had no WMDs and that Bush’s decision to invade Iraq was “wholly unjustified and brutal”. At the time, Bush was telling all those opposed to his war, that if they were not with him, they were with the terrorists.

After Bush’s impromptu admission, his audience burst into tolerant and kind laughter. There was no outrage expressed at his lack of remorse for the Iraqi lives lost thanks to his brutal invasion and occupation (not to mention lives of US soldiers). No outrage that he could only admit the truth after it slipped out inadvertently. No demand that his admission to war crimes face real consequences – such as a trial for war crimes. No comment on the sheer hypocrisy of war criminal Bush righteously condemning war criminal Putin.

Bush’s slip is no joke, no laughing matter. It is a grim reminder of that callous disregard imperialists have for the humanity of their victims. 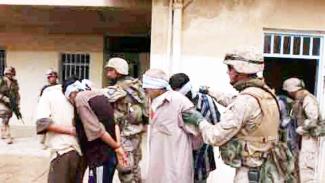