The 12th West Bengal State Conference of CPIML was held on 13-15th May 2022 in Kolkata with the call to resist communal fascist onslaught of BJP and RSS, to fight against TMC's political terror, corruption and attacks on democracy and to strengthen the left and democratic movements.

The city was named after revolutionaries of Indian freedom struggle Batukeshwar Dutt and Kalpana Dutt. The Conference hall was named after student leader and activist Anis Khan who was murdered by the Police recently and the dais was named after Subimal Sengupta, former member of CPIML state standing committee who passed away in a tragic road accident last year. The conference began by commemorating revolutionary poet Sukanta Bhattacharya and eminent theater personality Badal Sarkar on their death anniversary (13 May). Veteran Naxalbari leader comrade Siril Ekka hoisted the red flag. Comrades paid tribute to all martyrs and departed comrades of the Party.

The inaugural session started with welcome address by the secretary of the outgoing state committee Abhijit Mazumdar followed by a series of vibrant cultural performances of recitations and songs. CPIML General Secretary Dipankar Bhattacharya addressed the open session elaborating the present political situation of the state and the country. He said, the BJP and RSS are carrying out communal fascist attacks on our democracy and history with the aim to achieve their dream of 'Islam se azadi' within their centenary year in 2025. In the 2021 elections, the BJP had to back down a bit due to electoral pressure in several places including West Bengal, as well as the anti-CAA, anti-NRC movements and the massive farmers’ movement. But after winning elections in four states, including Uttar Pradesh, in 2022, they are again in full swing to fulfill their agenda. Bulldozers are coming down in various places including Jahangirpuri, Shaheen Bagh and Muslims in particular are being targeted on the occasions like Ramnavami or Hanuman Jayanti.

If BJP can succeed by turning ‘Jai Shri Ram’ into a war cry, then we have the popular slogan like ‘Inquilab Zindabad’, which has risen from the womb of the freedom movement.

The ‘No Vote to BJP’ slogan in last Bengal election was successful to thwart their desperate attempt to come in power. Although the BJP is now facing challenge in Bengal politics after the electoral defeat, the RSS continues its activities to the fullest. On the other hand, the mandate given by the people of Bengal against BJP went in favour of TMC and they are now using it to spread rampant political terror, corruption and an all out attack on democratic rights. Our call against this misrule is ‘No Concession to TMC’. We need the Left to emerge as the main opposition in West Bengal. And this calls for a broad and fighting unity of Left forces and simultaneous struggle against the BJP's fascist offensive and TMC misrule. The 2024 Lok Sabha election will be significant in this context. A grand alliance of all anti-BJP forces is needed which must be based on struggles and movements on peoples agenda. Let us move forward with courage, determination and organizational strength to face this realm of fear and terror.

An 11 member Presidium and 5 member steering committees were formed to conduct the delegate session hereafter. The presence and participation of more than 400 delegates and observers including women and youth delegates from Adivasi, Muslim and various marginalized backgrounds from different districts of the state was remarkable. Abhijit Mazumdar presented the draft report on the party works of last 4 years along with political scenario of the state. More than 80 delegates actively participated in the discussion. Abhijit Mazumdar addressed the house by summarizing the deliberations. After incorporating all relevant points and suggestions raised by the delegates the draft report was passed by the conference unanimously. The concluding session of the conference was addressed by Dipankar Bhattacharya after which a new state committee of 61 members was elected which re-elected Abhijit Mazumdar as the state secretary. Comrades Swadesh Bhattacharya and Dhirendra Jha addressed the conference with encouraging notes towards upcoming Party Congress in 2023.

The conference took resolutions to protest against soaring price hike, inflation and unemployment on May 25-31 on the call of five left parties; to demand withdrawal of Deocha Pachami Coal project; to generate movements against increasing cases of violence against women in the state; to demand justice for the murder of Anis Khan; to demand investigation of SSC corruption and fair recruitment; and to hold protests throughout the month of May against bulldozer raj of BJP-RSS. 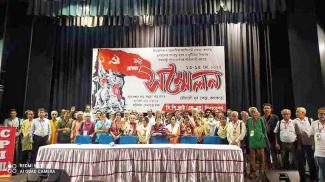