Balwant Kumar Singh, resident of Singhna village, standing for the Mukhia election in Dumri Panchayat, Amba/Kutumba Block with the election symbol of 'brinjal' made 4 Mahadalit youths from Kharanti village do sit-ups for half an hour as 'punishment' for allegedly not voting for him after accepting money; moreover, he also committed the heinous act of making the 4 youths spit and then lick up their own spit. This barbaric incident was perpetrated on 10 December 2021 when the entire world was observing International Human Rights Day. This sample of shameful feudal oppression as 'punishment' under 'slave system' was perpetrated at about 7 or 8 AM on International Human Rights Day. It was done under the 'Sushasan' (good governance) government in Bihar, the same government that has the support of Mahadalits as well as the 'Babus' who are the oppressors of Mahadalits. This is amazing engineering on the part of Nitish Kumar, whose social management is such that he secured the support of Mahadalits, extremely backward castes, as well as the upper creamy sections, but dalits and the poor cannot get any respect or dignity or any chance to be in power. The social structure of feudal oppression in various ways is roaring along merrily. At the social level, could persons of the dominance and standing of Balwant Singh be subjected to such a punishment on the suspicion that they did not give their vote in return for money accepted in the election?

Balwant Singh, who perpetrated this barbaric incident on youths of the Mahadalit Musahar caste, feared neither the law nor 'Sushasan'. Tearing Constitutional rights to shreds has become a common act for these people. They consider themselves all-powerful and having a birthright to oppress, abuse, beat and even kill weaker sections.

Such barbaric acts are enabled by the protection given by the ruling powers to dominant castes, as shown by numerous clear messages sent out under the Nitish government. Feudal criminals know they will not be punished, and commit their crimes of oppression freely against dalits, poor and minorities and even post videos of their crimes. Countless incidents of mob lynching have occurred. Perpetrators of massacres like Bathe, Bathani Tola, Shankar Bigaha and Miyanpur have gone scot free. Dominant criminals have become so emboldened that they do not hesitate to kill if they find that they are losing elections. Now that dalits and the poor are raising their voice, they are being violently and ruthlessly repressed. The Constitution, democracy and voices of dissent against BJP's inflammatory ideology are under relentless attack.

Balwant Singh of Singhna village, Dumri Panchayat called four Musahar youths of Kharanti village, accused them even before counting of votes of not voting for him, and first made them do sit-ups for more than half an hour and beat them up. Balwant Singh was having doubts of his election victory and wanted to recover the money he had spent on campaigning. The 4 youths were:

After making them do sit-ups and made to spit and lick up his own spit, Balwant Singh collected back the money he had allegedly given the four youths for the election.

The four youths told a CPIML team that Balwant Singh had given them Rs 3000 each for election expenses. All of them even voted for Balwant Singh. When pressure to 'punish' them began building up in neighbouring village Baija Bigaha, the four youths kept saying emphatically, counting has not even started, how can you accuse us of not voting for you? But Balwant Singh refused to listen to anything.

The Central and State governments are celebrating 75 years of independence, Amrit Mahotsav, but in this remote area in Bihar’s Aurangabad District there are neither government facilities nor social security. If the government does not learn a lesson from this incident, development and social security will remain meaningless ciphers on paper only.

In Kharanti village there are 40-45 Musahar families, 20-25 Ravidas, 4 Paswan and 7 Pasi families. The Ravidas Tola is a little separate, while the other houses are close together. When a marriage takes place in a dalit family, the couple start living separately. Therefore their names are not on the parents' half constructed houses, ration cards etc. Many aged men and women are also deprived of rations as their fingerprints have become blurred with age. Most houses here are constructed only up to door level and have make-shift roofs. Not even a single toilet has been constructed in any of the homes in the village, but the government has declared all the Panchayats to be ODF. There are no taps, no primary schools, and as children have to go 3-4 kms to Baija Bigaha for school, many remain without schooling. The Anganwadi centre is located in an old ruin, without windows, no schooling and very little or no nutritious meal arrangements. This is the reality of the government's public welfare schemes.

The CPIML has asked the Bihar administration to ensure: 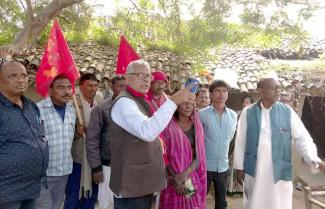