Skip to main content
Reports 24 November 2022
Release of Prof. G.N. Saibaba Suspended
"The winter cold has begun in Nagpur already. My muscles in legs, hands, stomach and chest are getting spasms and severe pains. I’m not able to bear the pain as I’ve become much weaker after two attacks of Covid-19 and one of swine flu.”
“No one is interested in providing emergency medical treatment for my cyst in kidneys, cyst in the brain, and rheumatic pains. Though the doctors at GMCH (Government Medical College Hospital) wrote for the immediate requirement to treat these and other fatal ailments,”
- G.N. Saibaba in a short letter written after the SC suspended his release.
Lodged in the Nagpur central jail since 7 March 2017, 56-year-old political prisoner Saibaba is 90% physically disabled and seriously unwell, suffering from hypertrophic cardiomyopathy with left ventricular dysfunction, a cyst in his brain, kidney stones, pancreatic problems, and acute cervical spondylitis, among other ailments.

While the acquittal of GN Saibaba, Mahesh Kariman Tirki, Hem Keshavdatta Mishra, Prashant Sanglikar and Vijay Tirki, by the Bombay High Court was a victory for the battle for the release of all political prisoners, the same was short-lived as the Supreme Court in a special sitting held on a Saturday morning, suspended the said order and stayed their release. After being incarcerated for 6 years, Prof G.N. Saibaba the others were acquitted by the Bombay High Court in its order delivered on 13th October 2022.

Sadly, Pandu Narote died during the pendency of the appeal. Prof. G. N. Saibaba, who is in a wheelchair with a 90% physical disability also suffers from a serious heart condition, acute pancreatitis and gall bladder stones and is in need of immediate medical attention. A request for house arrest was also rejected. In the Press Conference held in Delhi on 'India Behind Bars', Vasantha, activist and partner of GN Saibaba had said, "Saibaba has been battling various health issues for so many years. This government has no basic sense of responsibility and empathy towards its own citizens."

The manner in which the present regime has weaponised an already unjust criminal justice system to lock up anyone standing up against its unjust policies is clear in its use of the Unlawful Activities Prevention Act.

CPIML will continue to fight for the release of all political prisoners and the repeal of all draconian laws. 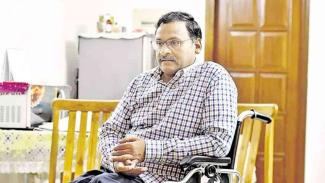