“They have the force and will be able to dominate us, but social forces can be arrested by neither crime nor force. History is ours, and the people make history”
- The Last Radio Broadcast of Salvador Allende

The defeat of Jair Bolsonaro in the recently held elections in Brazil at the hands of Lula led Partido dos Trabalhadores (PT) marks the latest and perhaps most significant victory in a chain of leftist victories in the continent that the United States has traditionally regarded as its backyard.

The long history of intervention by the US in order to install dictators overthrowing popularly elected rulers in the region has left a deep and indelible mark on the politics, economy, and history of the region. American private companies have developed entrenched interest in preserving and upholding such regimes, which in turn have facilitated their exploitative practices. Hardly a single country in the region has been untouched by American interventions.

The Monroe doctrine emerged as the United States was engaged in a genocidal war against the Native Americans and westward expansion by violating its own treaties with native tribes through what is now known as ‘Manifest Destiny’. President James Monroe in his annual address to the US Congress in 1823 articulated that the US would not tolerate European attempts to intervene in North or South America. By the emergence of the Cold War it meant that the US would not tolerate the growing influence of communism in Latin American countries.

The brutal suppression of the elected government of Salvador Allende in Chile is perhaps the most egregious example. When the internal reactionary forces in Chile failed to unleash social chaos after Allende’s election, the US took it upon itself to orchestrate a military coup that overthrew the government in 1973. This was based on the fear that a "well-functioning socialist experiment" in the region would be an inspiration across the region. Instead the Pinochet regime made Chile the home of neoliberalism, which was then unleased across the globe.

A Neo-Monroe doctrine is shaping place in the region, with the US  imperialist project battered by the debacle and withdrawal from Afghanistan and the victory of various anti-imperialist and progressive governments in Latin America. The US have been raising alarms against the growing influence of the left in Latin America and subversion of what they feel are core US interests. US Senator Ted Cruz’s recent rants against energy nationalization and demands for greater sanctions on Venezuela have gone viral. Attempts to initiate regime change in Venezuela has saw private military contractors attempt to land contingents of armed mercenaries in the country. Sanctions have also be heightened on Cuba despite international condemnation.

The Caribbean island nation of Haiti  is becoming the new battleground for US imperialist forces. In an Op-ed published by the editorial board of Washington Post, the newspaper shouts - Yes, intervene in Haiti — and push for democracy. The call is not something out of the blue. The US President Joe Biden and Canadian Prime Minister, along with the Organisation of American States (OAS) cartel had been pushing for ‘dropping democracy’ on Haitians.

Currently, Haitian capital and many areas are in the grip of violent gang-related activities. The violence, which the Core Group (composed of the Special Representative of the United Nations Secretary-General, the Ambassadors of Brazil, Canada, France, Germany, Spain, the European Union, the USA, and the Special Representative of the OAS) would like to project as lack of democratic understanding in the country, is in fact the product of years of throttling democratic aspirations of the people by the criminal-oligarchy nexus backed by the Core Group itself.

The US-Core Group now wants to ‘send democracy’ in Haiti through funding, electoral meddling and rehashing the horrors of military intervention in the country. In fact, today the Caribbean nation is the largest subject to foreign actors’ constant self-insertion into internal matters. It was the same US-Core Group that helped in ousting democratically-elected president Jean-Bertrand Aristide in the 2004 coup by right-wing ex-army paramilitary units, which invaded the country from across the Dominican border. He was exiled to the Central African Republic and in 2011, the US State Department categorically asked South Africa to postpone his departure to Haiti in view of the elections.

If the US decides to send boots in Haiti, it will be the fourth official US intervention in Haiti and 470th across the globe since the 1800s. And since 1991, a new Haitian intervention will up the US imperialist card to 252 (Military Intervention Project at Tufts University, 2022). 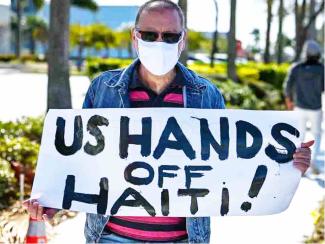