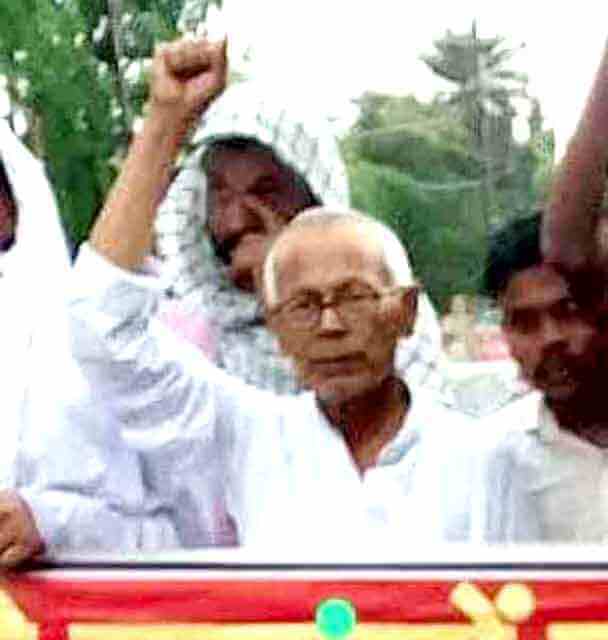 CPIML lost Comrade Laxmi Paswan, 70, a pillar of the Party in Darbhanga and the entire Mithila region for the last five decades. He passed away on 4 November at a private hospital in Samastipur. Beginning as a student activist in the 1974 movement, he spearheaded the battle for the dignity and rights of the oppressed people braving feudal violence and state repression including years of imprisonment and conviction in a false case. Comrade Laxmi Paswan was Bihar state vice president of AIARLA. A popular leader of the masses in Darbhanga, he had been jailed many times, spent more than five years in jails and faced feudal-kulak violence. He joined politics through Socialist party but in the course of time got disillusioned with it and joined PCC which was then led by comrade Umadhar Singh. Many valiant land struggles under his leadership were fought and won during those days and people living on those lands remember him with much admiration. During the decade of 80s he joined CPIML Liberation and since then played an important role in establishing and expanding the party in the Mithila region.

His passing is a great loss for the organisation in Darbhanga as well as for the rural toiling masses among whom he was extremely popular. He had to always face the ire of criminal feudal nexus who succeeded in preventing him from contesting elections by falsely implicating him and a dozen other activists in a case of murder, but they couldn’t succeed in stopping him from fighting the struggles of poor and oppressed despite so many jail terms. He will always be remembered by the younger comrades as a stout fighter and committed leader. He is also remembered for inducting the largest number of members into the AIARLA, which eventually gave a great strength to our work among rural workers. Thousands of people paid him tribute before his last journey was taken out from the CPIML Darbhanga office. A huge procession accompanied him along with CPIML Politburo member Dhirendra Jha, MLA Rambali Yadav, AIARLA Bihar president Upendra Paswan and others to the cremation ground in his village Dilahi. Ex-Minister of state for Education in Bihar Ashraf Fatmi, Prof. Surendra Pd. Suman, JDU leader Rampravesh Paswan, Congress leader Prof. Dayanand Paswan, CPI district secretary Narayanji Jha, CPIM dist. Secretary Avinash Chandra Thakur, SUCI leader K Mujahid, Bhim Army’s Bhola Paswan, many elected representatives of Zilla Panchayat and Block panchayats, students of Darbhanga Welfare Hostel, a large number of prominent citizens participated in his last journey.

Comrade Laxmi Paswan had added many new chapters in the revolutionary struggles of dalits and poor in the region. He led many struggles through which hundreds of dalits succeeded in winning their rights over the land. His legacy will continue to guide and inspire us in the battle against communal fascist forces across Mithila and Bihar.