The 27th Convention of the United Nations Framework Convention on Climate Change (UNFCCC) Convention of Parties (COP) was held at Sharm El-Sheikh Egypt from November 6th to 18th, 2022 to address the growing concerns of climate change. This COP 27 took place at a time when in 2022, the world has witnessed rise in extreme weather events. From massive floods in cities of India, Pakistan, etc., to the worst heat wave in a century across Europe, the failure of countries to come together to address climate change and its impacts has been left exposed.

The COP 27 was organised in the backdrop of the Paris Agreement of 2015, that discarded the Common But Differentiated Responsibility (CBDR) (distributing the burden of emission reductions based on historical emissions) at the international negotiations. The new policy of Voluntary Emission Reduction programme introduced through the Paris Agreement means countries will independently decide commitment reductions, which are not legally enforceable, unlike the previous setup under Kyoto Protocol of 1997. Since 2015, the world has witnessed how the shift from mandated reduction to voluntary cuts diluted the efforts to combat climate emissions by leaving the historical emitters – the industrialised, developed and rich countries – from any accountability.

COP 27 Egypt: The Issue of Loss and Damage

COP 27 began with the inclusion of the agenda on “loss and damage” – compensating countries for climate-induced damages – to the summit’s main agenda. Similarly, another standing agenda of warning “everyone on the planet” about the danger of hazardous weather events in the next five years. This agenda was introduced by UN Secretary General Antonio Gueterres, who by including the latter, tried to compensate for earlier years of absence and criticism by poor countries for not taking their concerns into consideration. UNFCCC’s quest for climate equity has been badly tarnished due to lack of their inclusive agenda that cater to those countries impacted by climate change, especially the poor and developing countries. By including “loss and damages” and mechanism to warn people of extreme and hazardous weather events, the UNFCCC is trying to minimise its loss of credentials.

Can COP 27 undo the damages made by developed countries in the earlier conferences? Are enough steps being taken to tackle the growing dangers of climate change?

It is difficult to say whether the climate talks are going in the right direction, considering the world witnessing heavy losses due to impacts of extreme weather events. Take the Pakistan’s massive flooding for example. The flooding, which began in the month of June 2022, has killed more than 1,700 people, among whom nearly 400 of them were children, while millions have been displaced. The overall cost of damages by the extreme inundation is estimated at around $40 billion and similarly, the damages caused by Cyclone Amphan in Bangladesh and India in 2020 are estimated at $15 billion. Considering the contributions of India, Pakistan and Bangladesh to world Green House Gas (GHG’s) emissions, the impacts they are suffering is extremely disproportionate.

The COP 27 extended into the weekend as the two-week-long negotiations failed to provide a breakthrough. In his speech at the closing plenary session, COP 27 President Sameh Shoukry noted the signifying consensus countries reached on “loss and damage” fund. The idea of the fund is to pave way for countries battered by the impact of global warming and climate change. However, the idea of the fund is only for “particularly vulnerable countries”, thereby reducing the scope of countries covered by it. Despite its lack of scope, can this new fund bring a promise of hope or dismay to developing and poor countries? Looking into history, it feels as though this will become a point of further contestation in the future.

For example, according to research, developing countries need around $2 trillion annually to reduce their GHG gasses to meet their net zero targets. However, looking at the past record of Climate Fund and the issues it has raised over the years, the promise of a new fund with onus on developed countries to pay repatriations looks bleak. Also, developed countries headed by US signalling the shift of responsibility towards private sector to fund climate finance, it will be interesting to note how climate justice will be achieved.

Similarly, the formal draft that went for discussion on Friday – November 18th, 2022, i.e., the last day of COP, failed into include the proposal for phase down of all fossil fuels. This call was initiated by India and supported by the European Union and several other countries at the COP 27. With the increasing impact of extreme weather events, it is important for the world to acknowledge the fact that fossil fuels, which includes oil and coal, have and are contributing towards GHG’s. The final draft negotiated at COP 27, instead repeated several of Glasgow Climate Pact texts – “to accelerate measures towards the ‘phase down’ of unabated coal power and ‘phase out’ and rationalisation of inefficient fossil fuel subsidies”. This, yet again, aims to shift the burden of tacking fossil fuel emissions on the developing and poor countries.

Unfortunately, the trend at UNFCCC negotiations with the latest COP 27 is only intensifying the perception that it is the poor who will shoulder the burden of mitigation and adaptation.

The Politics of Climate Fund and US Efforts to Privatise Funding

In 2009, the COP 15 at Copenhagen set a climate finance target of $100 billion as climate finance target for aiding developing and poor countries to tackle climate change. This fund will be contributed by the developed countries who have been historically responsible for contributing towards GHG’s. However, the present state of affairs for this climate fund is abysmal as most of the countries that assured of contributions have either held back or evaded this responsibility.

The developed countries have failed to contribute to the climate fund and now United States one of the biggest GHG emitter and historical contributor is talking of privatising the climate fund. US President Joe Biden in his speech at COP 27 wants the onus of delivering climate finance on private sector through investments. This is a disastrous proposal as it clearly shows developed countries want to shy away from any kind of accountability and wish to continue business as usual. Moreover, private entities cannot be held accountable under international agreements and climate finance is not a project of profit earning, but a necessity to undo historical injustice through financing, adaptation and mitigation.

Droughts, cyclones, floods and other extreme weather events have not only increased, but are proving destructive and has become a permanent phenomenon for earth climate. It is important to note that world leaders like former US President Donald Trump, former Brazilian President Bolsanaro and other leaders, who did not accept climate change and drew policies exacerbating climate exploitation, have been defeated by the people.  However, India under the Prime Ministership of Narendra Modi, who himself notoriously declared that it was not the climate, but people’s ability to bear the cold that has changed and his BJP governments at Centre and in States, where it is in power, has been blatantly following policies that further degrade environment and the climate. For example, the BJP government in Madhya Pradesh is planning to permit Essel Mining’s, owned by Aditya Birla Group, to cut down more than two lakh trees for a diamond-mining project in Buxwaha. Similarly, the National Board for Wildlife’s Standing Committee is planning to use 98.59 hectares of land from Dehing Phatkai elephant reserve forest for a coal-mining project. It has already granted approval for mining in 57.20 hectares of forest land in Saleki Proposed Reserve Forest.

The seriousness of world leaders in tackling climate change has been time and again exposed, proving their incapability to pin responsibility on historical emitters and to develop policies that don’t replicate the past. However, the saga of a piece-meal approach to climate change as we see now won’t help solve the issue, rather will complicate lives of the poor, marginalised and vulnerable across the globe. 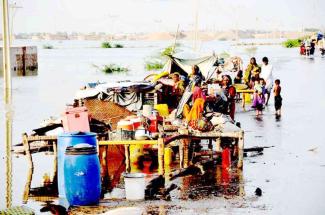