December 6, 2022 will mark the completion of three decades since the demolition of the Babri Masjid. The time bomb that was planted in the wake of India’s independence, with the surreptitious installation of idols at the mosque on the night of 22-23 December 1949, exploded in broad daylight on 6 December 1992 afternoon, when a mob pulled down the mosque in the cheering presence of top BJP leaders. If future historians ever seek to identify a specific moment to trace the rise of communal fascism in today’s India, the demolition of the Babri Masjid on December 6, 1992 will undeniably be that moment. India has changed dramatically since that demolition. With every passing day we are now realising ever more acutely that the Ayodhya campaign of the Sangh-BJP camp was not about demolition of one 16th century mosque or the construction of a grand temple in what is believed to be the mythological birthplace of Ram, it was about changing the very idea of India and the constitutional framework of the Indian Republic.

The dominant idea before and even after the demolition of the mosque was to find a negotiated settlement of the Ayodhya dispute or go by the verdict of the judiciary. The BJP then refused to accept the idea of a court verdict arguing that a matter of ‘faith’ cannot be subjected to legal jurisdiction. It is not difficult to understand that the act of demolition actually followed from this premise, it was very much a planned conspiratorial act to change the circumstances of the dispute. More than a quarter century later, with the BJP ensconced in power at the Centre, the Supreme Court effectively validated the post-demolition circumstances by awarding the ownership of the ‘disputed land’ to the very people who had demolished the mosque even after terming the act of demolition as an egregious violation of law. While the demolishers got what they wanted, the seekers of justice got a ‘compensatory’ offer of a separate plot of five acres for the construction of a mosque. Nearly three years later, the apex court closed all cases arising from the demolition by declaring that the issue had ceased to survive!

Outside of the judiciary many in civil society had also hoped that the handing over of the disputed land for a temple would bring about a cordial end to the dispute and pave the way for communal harmony and reconciliation. The Act passed by Parliament in 1991 had also made a special exemption for Ayodhya while declaring all other places of worship to be unchangeable from whatever character they had at the time of attainment of independence. The Sangh brigade however made no secret of its future gameplan – for them Kashi and Mathura, to name just two more places, were just waiting to follow the Ayodhya template. With the Ram Mandir all set for inauguration just before the 2024 Lok Sabha elections, we can see a simultaneous intensification of the battle for Kashi and Mathura. Following the Ayodhya template, the Sangh has again employed a two-pronged strategy combining litigations with aggressive communal mobilisation on the ground.

To create a legal space for mounting more assaults on mosques for conversion into temples, the BJP has challenged the legal validity of the 1991 Places of Worship Act itself. With the Supreme Court asking for the Modi government’s response on the subject, the future of the Act, which was upheld by the Supreme Court even in the course of its 2019 Ayodhya judgement, is anybody’s guess. Like Kashi and Mathura in Uttar Pradesh, the Sangh brigade has also targeted the Jamia Masjid in Srirangapatna near Mysore which was the historic site of Tipu Sultan’s war with the East India Company in 1799. Several well-known Mughal and pre-Mughal monuments associated with Muslim rulers, including world famous heritage centres like the Taj Mahal and Qutab Minar, are today being targeted by the Sangh brigade as it seeks to rewrite history and paint the whole of India with a saffron brush.

The trajectory of the Ayodhya dispute has clearly taught us that there can be no reconciliation with the cultural aggression of the Sangh brigade. The BJP wants to take us back to a mythical past of Ramayana and Mahabharata, it wants to bulldoze India’s historical and cultural diversity into a saffron monolith cherished by the RSS. It wants to purge India of every Islamic sign, from history and architecture to everyday culture and cuisine. The so-called cultural nationalism propagated by the RSS is nothing but imposition of RSS-style Hindutva or Hindu supremacy which will however not stop at marginalising everything Muslim, it will go the whole hog to impose the Brahmanical and patriarchal order enunciated in the Manusmriti, which the RSS had advocated as India’s original and authentic constitution. This RSS quest for Manusmriti-inspired uniformity is a total war on India’s diversity, and on the continental-scale collage that is India beyond the imaginary straitjacket of Hindi-Hindu-Hindustan.

December 6, 2022 also marks the 66th death anniversary of Babasaheb Ambedkar, the chairman of the drafting committee of India’s Constitution and the first Law and Justice Minister of independent India. With prophetic foresight Ambedkar had warned: “If Hindu Raj does become a fact, it will, no doubt, be the greatest calamity for this country”. Two months before his death, Ambedkar had renounced Hinduism and embraced Buddhism with half a million of his followers. He did that in Nagpur, the headquarters of the RSS, on Ashoka Vijayadashami, the day Ashoka the Great had renounced war and violence and turned to Buddhism for peace and equality, the very day the RSS chose as its foundation day and celebrates by worshipping weapons and violence. Today the BJP seeks to curb the very right provided in the Constitution to follow a religion of one’s choice. The calamity Ambedkar had warned against is staring us in the face, the challenge is to rescue India from the ravages of this disaster and strengthen democracy by all possible means to stop the Hindutva bulldozer. 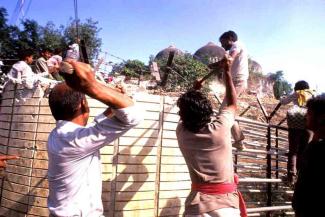